Jets' offense will be 'a hair different' with Wilson back 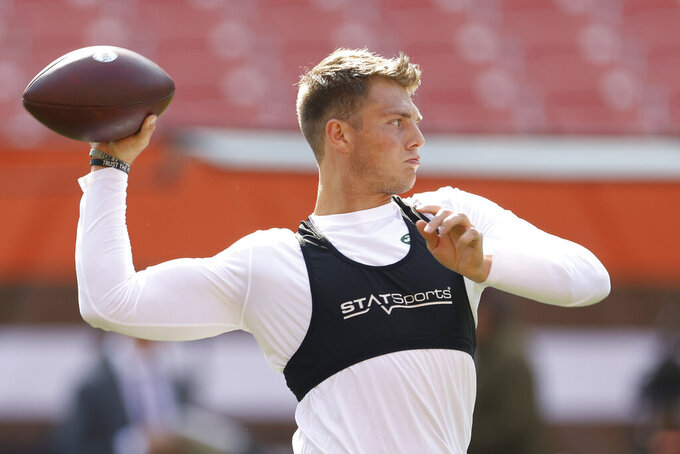 FILE- New York Jets quarterback Zach Wilson (2) warms up before an NFL football game against the Cleveland Browns on Sunday, Sept. 18, 2022, in Cleveland. Changes are coming to the Jets' offense. Nothing too drastic or radical, but Wilson's return as the starting quarterback allows the team to do some things it simply couldn't with Joe Flacco under center. (AP Photo/Ron Schwane, File)

Nothing too drastic or radical, but Zach Wilson's return as the starting quarterback allows the team to do some things it simply couldn't with Joe Flacco under center.

“Certain aspects, for sure,” offensive coordinator Mike LaFleur said Thursday. "Zach’s a different player than Joe, so obviously the plan’s going to be a hair different in certain ways.

“Not trying to dive into it too far, for obvious reasons, but we’re going to do what we think is best to help the offense and Zach and all those guys to be successful.”

Wilson is fully healthy six weeks after suffering a bone bruise and having arthroscopic surgery on a torn meniscus in his right knee. He's expected to start Sunday at Pittsburgh in his season debut, barring any setbacks at practice this week.

That means no restrictions on the 23-year-old quarterback whose athleticism is as much as weapon in the Jets' offense as his arm.

It's what made him so coveted in the draft last year, and had the Jets excited to take him with the No. 2 overall pick. Wilson's mobility should help open some things up for an offense that has held a lead for just 22 seconds this season where the 37-year-old Flacco — more of a traditional pocket passer — simply wasn't equipped to do. It's a dimension Wilson brings to the offense that has become popular with other teams in maximizing their quarterbacks' abilities.

“I thought there was times, just in certain situations, he almost just put his head and just found an escape route and tried to go make plays,” LaFleur said. “That’s not what we’re asking him to do — we’re just asking Zach to go play his game, whatever he’s comfortable with.”

Before Wilson's preseason injury, the thought was the influx of playmaking talent — the additions of Garrett Wilson, Breece Hall, C.J. Uzomah and Tyler Conklin, in particular — would help make the offense more efficient after Wilson might have had the tendency last season to try to play hero while making plays out of nothing.

On the play during which he was injured in August, Wilson was trying to get extra yards — a not-so-wise display of his ultra-competitiveness.

Still, Wilson insists he isn't going to change the way he plays.

It's an approach — if used smartly — could help, especially with the state of the Jets' shaky and shuffled offensive line.

Left tackle George Fant went on injured reserve with a knee injury on Tuesday and Duane Brown is still at least a week away from returning from IR with a shoulder injury. That means career backup Conor McDermott is likely to get the start with a responsibility of protecting Wilson’s blind side.

Wilson’s ability to make plays off-schedule and scramble out of trouble could come in handy Sunday during his return in Pittsburgh. And LaFleur believes his quarterback learned something from being sidelined the past six weeks.

“The game in the NFL is when you have to protect yourself and get down, you have to get down. He knows that,” LaFleur said. “I have no worry that he’s going to make the right decisions, but at the same time, he’s going to utilize his skillset."

And Wilson isn't taking the field planning to prove anything after being away so long.

“No, that’s thinking too much,” he said. "In my mind right now, it’s, ‘I’m going to give this everything I have. I’m going to have fun with it. Let the result take care of itself.'

“If I go out there and I play my game, I do what I’m supposed, I have that short-term memory after plays and move on, I think things are going to go well.”

NOTES: DL John Franklin-Myers (toe) fully practiced after being limited Wednesday. ... LB Quincy Williams (ankle) did not practice and is expected to be out for the game. ... CB Brandin Echols (hamstring) was limited.