Jets' past clashes with future as QBs Darnold, Wilson meet 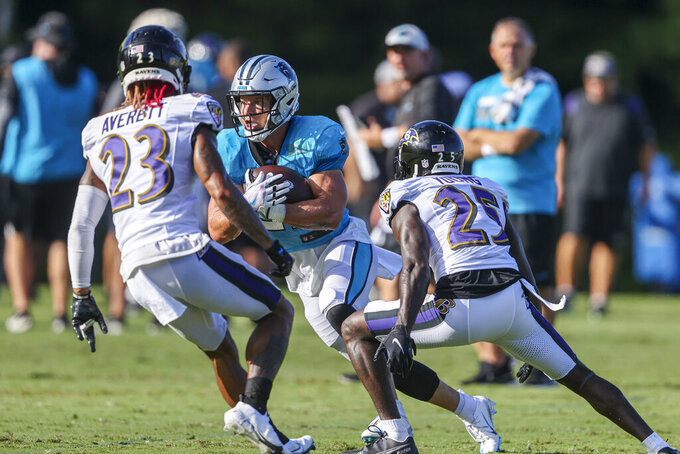 CHARLOTTE, N.C. (AP) — All eyes will be on the quarterbacks Sunday as the New York Jets' past clashes with its future when Sam Darnold faces his rookie replacement Zach Wilson in the season opener.

Darnold was once viewed as the Jets’ franchise QB after being selected No. 3 overall in the 2018 draft, but after going 13-25 in three seasons the team traded him to the Carolina Panthers and replaced him with Wilson, the No. 2 pick in this year’s draft.

Both QBs are now in charge of restoring hope to their respective franchises following years of on-field struggles.

The Panthers were 5-11 last season and haven’t won a playoff game since the 2015 season. The Jets were 2-14 and haven’t been to the postseason since losing to the Pittsburgh Steelers in the AFC championship game in the 2010 season.

Wilson has been touted by several NFL analysts as a future star in the league, but Tony Romo recently took it to the next level.

The former Dallas Cowboys quarterback who’s currently the lead color analyst on CBS’ NFL broadcasts told reporters during a conference call that he believes Wilson will be one of the top three to five quarterbacks in the league shortly. He called Wilson “unbelievable” and compared him favorably to Kansas City star Patrick Mahomes.

“I actually think Zach Wilson with the Jets is going to turn that franchise around,” Romo said.

Wilson appreciates the high praise, but doesn't want buy into any of it.

“I mean, it’s cool obviously, of course,” he said. “But Romo can’t tell the future and everything that’s going on. I think it’s very nice of him to say that stuff. I think Tony was a great quarterback in his day when he played and so it’s awesome.

"It kind of goes back to what I’ve always said, ‘You can’t take the highs too high and the lows too low.’ You can’t let things like that disrupt you.”

Darnold, on the other hand, is looking to rebuild his career in Carolina where he has more playmakers to work with and different coaching. The fourth-year QB has downplayed any notion of revenge in facing his former team, calling it just another game.

He's also gone out of his way not to bash his former team, taking the high road by saying this week “I didn't do my job to the best of my abilities (in New York). That's really all there is to it.”

Clearly this is a golden opportunity for Darnold to win over a Panthers fanbase that is still lukewarm on his arrival, as well as to bury some of his past demons from playing in New York, where he was sacked 98 times in three seasons.

“I think Sam is just in a new beginning,” said Panthers wide receiver Robby Anderson, who was also teammates with Darnold for two seasons with the Jets. “A lot of times, new beginnings are what a lot of us need. Just sometimes turning that page to a new chapter."

Christian McCaffrey was an All-Pro running back in 2019, but injuries limited him to three games last season. Coach Matt Rhule said McCaffrey is healthy physically and mentally and feels he's ready for a big season.

Panthers offensive coordinator Joe Brady said he has to be “smart” with McCaffrey's touches. McCaffrey had 403 touches in 2019 when he became only the third player in NFL history to have 1,000 yards rushing and receiving in the same season.

McCaffrey did not play in the preseason.

“We’re not sitting there with the mindset of ‘it’s 300 touches (or) it’s 400 touches,’" Brady said. “It’s a game to game and it's more situationally and we evaluate it week to week.”

Perhaps the biggest concern for the Jets heading into the regular season is their youth at cornerback.

“Obviously, we’re very young, but I have complete confidence in this group,” Hall said. “I love this group. I’m excited for what our potential is and the pieces we have. Even though we’re young, we’re very hungry."

While much of the attention will be on Wilson, rookie wide receiver Elijah Moore is expected to have a major role in New York’s offense right away.

The second-round pick out of Ole Miss was one of the standouts of offseason workouts, minicamp and training camp while consistently making plays and becoming a favorite playmaker for Wilson. A quadriceps injury sidelined him for nearly two weeks, but picked up where he left off — and the Jets think that will carry into the regular season.

“He’s kind of like an old soul, (like) he’s been here for five or six years already," Saleh said. "... He doesn’t make the same mistake twice. He’s a quick learner. He’s always trying to find an edge.”

By all accounts Panthers defensive end Brian Burns appears on the verge of a breakout season. Burns had nine sacks last year despite seeing plenty of double teams. Carolina added Haason Reddick, who had 12 sacks last year for Arizona, and defensive tackle DaQuan Jones to take some of the pressure off the guy Panthers fans call “Spiderman" because of his post-sack poses.

The game could be decided by two rookie kickers.

The Panthers made a dramatic change at kicker after the final preseason game, replacing slumping veteran Joey Slye with 6-foot-5, 258-pound rookie Ryan Santoso, who was acquired in a trade with the New York Giants.