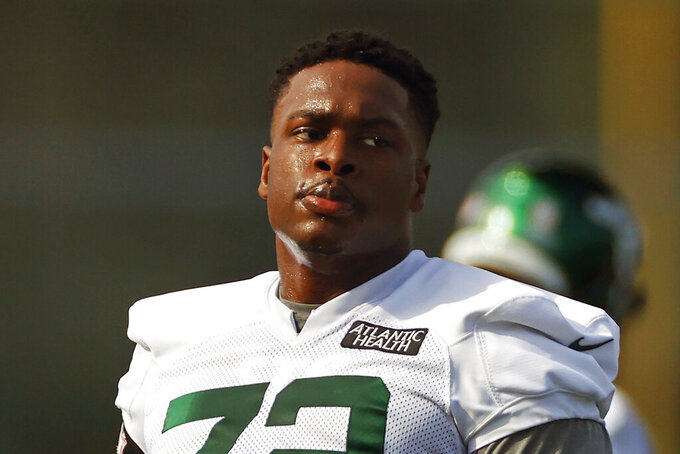 FLORHAM PARK, N.J. (AP) — The New York Jets placed offensive lineman Cam Clark on injured reserve as they made four roster moves Tuesday to get down to the maximum 85 players.

Clark is sidelined with a bruised spinal cord after being injured during practice on Aug. 3 and hospitalized overnight. It's unclear when — or if — he'll be able to play again, but is expected to make a full recovery.

Clark was entering his second NFL season after being a fourth-round pick last year out of Charlotte. He didn't appear in a game as a rookie after spending the first half of the season on IR with a knee injury.

Dwumfour, an undrafted rookie out of Rutgers, had a half-sack, fumble recovery and a pass defensed in the Jets' preseason-opening win over the Giants on Saturday night. But he left in the second half with a calf injury and didn't return.

Jackson is in his fourth NFL season, and was entering his third with the Jets.

Walter was claimed off waivers in May from San Francisco, where he spent last season on the practice squad.

NFL teams must make another round of moves to get down to 80 players by next Tuesday. Final cuts for teams' 53-player rosters must be made by Aug. 31.