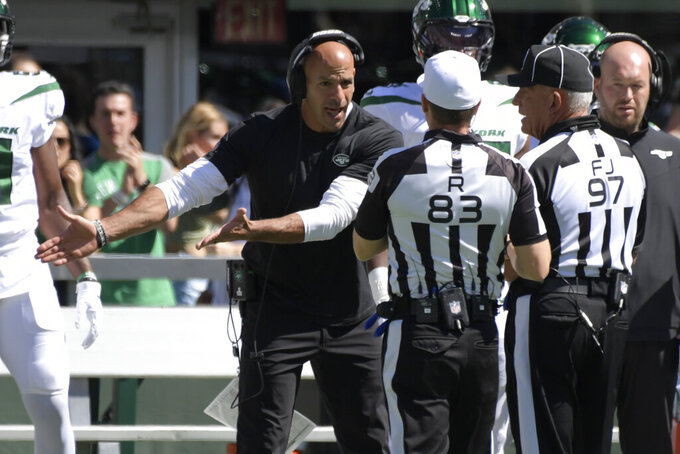 From fans, media and the Twitterverse.

“She’ll probably kill me — God bless my mother,” the New York Jets coach said Wednesday with a big grin. “Broken English, doesn’t even know how many yards it takes to get a first down and she was coaching me up on what we should tell our receivers.”

At 0-2, the suggestion box is probably open. So what did Saleh's mother have to say about the Jets' receiving group?

“I was a little upset at the time, so I’m not sure I took it all in — even though I should’ve,” Saleh said. "I’m pretty sure it was something about the ... I don’t even remember."

Well, hey, mother knows best, right? Even if her knowledge of football rules is sketchy.

“Everybody’s got an opinion, but you know what? I had an opinion, too,” Saleh said. “You take it with a grain of salt, but I’m not afraid to absorb all the information because you never know what you might find. All of it's worth something.”

The 42-year-old coach is coming off a 25-6 loss to New England in the home opener, which followed a 19-14 defeat at Carolina in the first game of the season.

“What do you guys think?” Saleh said with a smile when asked how he'd evaluate his in-game decisions so far.

After each game, he meets with Jets game management coach and longtime NFL assistant Matt Burke. They review tape of the plays, calls and everything in between to see what worked, what didn't and what can be improved.

Saleh even poked fun at himself for throwing the red challenge flag on the Patriots' second play from scrimmage, when Kendrick Bourne had a 7-yard catch and fumbled the ball. But officials whistled the play over, saying the receiver's forward progress had been stopped — and it was not reviewable.

“There’s stuff that I could’ve done better and there’s things that we feel good about and there’s things that we’ve learned off of,” Saleh said. "It’s going to be a constant learning process. I haven’t had anything hard, either. I don’t think I’ve gotten the chance to challenge — tried to on the first play of the game or the second play of the game.

“But I think so far, it’s been good. But I know that there’s going to be greater challenges ahead.”

Saleh was a longtime NFL assistant before being hired by New York in January to turn the frustrated franchise around. He immediately put his “All Gas, No Brake” mantra into motion. It's even printed on some of the facility doors and on the wall in the back of the end zone at MetLife Stadium.

It was the first step in what Saleh has acknowledged will be a process — changing the vibe around a team that has the NFL's longest postseason drought at 10 seasons. While a new attitude has permeated the halls of the facility, the familiar struggles on the field remain.

That's life with a rebuilding roster, led by a fresh-faced rookie quarterback in Zach Wilson. Mistakes will happen — such as Wilson's four-interception game last Sunday — but the challenge is to limit those and not repeat them.

And, of course, win.

Saleh made some headlines when he said after the game Wilson needs to understand it's “OK to be boring” sometimes. That was a reference to the No. 2 overall pick perhaps trying too hard to make a big splashy play happen — “hero ball” — when small plays can be just as effective in leading to a win.

“There are so many things that are happening to these rookie quarterbacks,” Saleh said. “What’s great about him is he’s got the mindset to get in the film room and get better every time he sees something.”

Just as Wilson is learning, Saleh is, too. And hearing from anyone and everyone.

Speaking of which, did Mom also think Wilson needs to be more “boring?”

“No, she’s great,” a smiling Saleh said. “Mothers are supposed to be your greatest fans, right?”

Saleh said Wilson was dealing with a groin ailment after waking up Monday feeling sore from the game. But the quarterback fully participated in practice and his availability for the game is not in question.

WR Jamison Crowder did not practice because of a groin injury that has sidelined him the first two games. Crowder was dealing with the injury before going on the COVID-19 list for the opener and it was still not fully healed heading into Week 2 so he was held out. ... LB Jamien Sherwood was limited after missing the game with an ankle injury. There's hope Sherwood could return Sunday. ... DL John Franklin-Myers sat out practice with a calf ailment, but Saleh said he should be fine to play.

LB B.J. Goodson was placed on the reserve/retired list after playing seven snaps on special teams against New England on Sunday, his first game with the Jets after signing on Sept. 14. He was a fourth-round draft pick of the Giants in 2016 and also played with Green Bay and Cleveland.