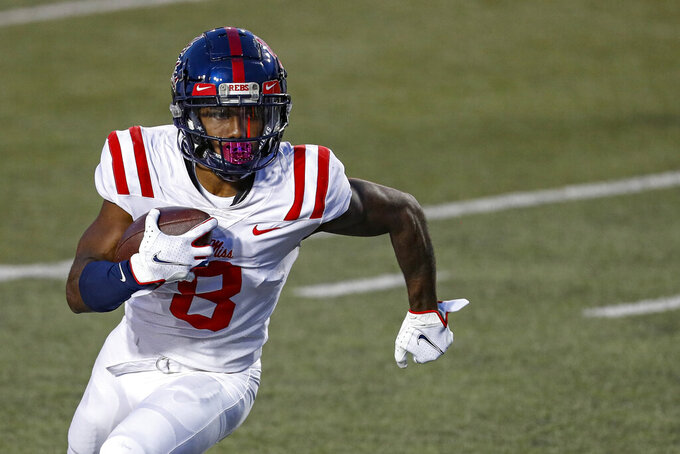 FILE - Mississippi wide receiver Elijah Moore (8) runs for yardage during an NCAA college football game against Vanderbilt in Nashville, Tenn., in this Saturday, Oct. 31, 2020, file photo. Moore is a possible first round pick in the NFL Draft, April 29-May 1, 2021, in Cleveland. (AP Photo/Wade Payne, File)

The New York Jets kept the theme going Friday night in the second round of the draft, selecting speedy and versatile Mississippi wide receiver Elijah Moore at No. 34 overall.

“He's dynamic,” coach Robert Saleh said. “When he gets the ball in his hands, he becomes something different.”

After fielding a mostly putrid offense the past two seasons under then-coach Adam Gase, the Jets focused on improving that side of the ball in a big way with their first three picks.

New York selected BYU quarterback Zach Wilson at No. 2 overall Thursday night, giving the Jets the player they hope can be the face of the franchise for years to come. They then traded up from No. 23 to No. 14 to take USC guard Alijah Vera-Tucker, who'll team with second-year tackle Mekhi Becton to bolster the left side of the offensive line in front of Wilson.

General manager Joe Douglas and the Jets received several inquiries from teams looking to trade up into New York’s spot at 34. But the Jets decided to stay put and add another young piece to their new-look offense.

“We really didn't think Elijah had any chance to make it to us where we were picking today,” Douglas said. “While you do answer the call, this was an opportunity we couldn't pass up to take Elijah.”

Moore said he's excited about the prospect of playing with Wilson every week.

The explosive Moore had a breakout season in 2020, setting a school record with 86 catches for 1,193 yards and being selected an All-American — despite opting out of the final two games. The 5-foot-9 1/2, 178-pound Moore is considered an outstanding route runner with terrific hands and toughness after the catch.

Because of his versatile skillset, he can be used in a variety of ways in offensive coordinator Mike LaFleur's scheme. That could be in the slot, on the outside or even out of the backfield.

“A great fit,” Moore said of him playing in LaFleur's style of offense. “I feel like I'm a guy who adapts to anything, so whatever it is, I'm going to be able to adjust and get the job done.”

Moore made some headlines during a game against Mississippi State in 2019 when he pretended to be a dog urinating in the end zone after a touchdown. The gesture drew a 15-yard unsportsmanlike conduct penalty — and Mississippi missed the extra point and eventually lost 21-20.

The wide receiver said several teams, including the Jets, asked him about it during their pre-draft video interviews with him. Moore insisted he learned “countless things” about the incident.

“You’ve got to best believe that moving forward, that being in that position again, I’m going to think about that," he said. "It was definitely a blessing in disguise. I probably got more out of it and I would never change it for the world if I had to do it all over again and I wouldn't if I would understand and be in the position I am now.”

The decision to take Moore also puts veteran Jamison Crowder's future with the Jets in question. The reliable Crowder, who had 59 catches for 699 yards and six touchdowns last season, is scheduled to make $10 million this season but has no guaranteed money remaining on his contract.

The Jets also have Denzel Mims, their second-rounder last year, and Corey Davis, who was signed to a three-year, $37.5 million deal last month in free agency. Keelan Cole was also signed in free agency, and Braxton Berrios, Vyncint Smith and Jeff Smith are among those who remain in New York's receiving group.

A major knock on New York was it didn't provide Sam Darnold enough playmakers and protectors for the quarterback to thrive in his three seasons with the franchise. Darnold has since been traded to Carolina, and for a team that ranked last in almost every major offensive category last season, the Jets certainly actively improved that unit early in the draft.

“This is really the way the board fell this year,” Douglas said.

After just one pick during the draft's second day, the Jets will be busy Saturday with six selections — including two each in rounds 4 through 6. Defense could be high on the list, with cornerback and edge rusher among the Jets' most pressing needs.