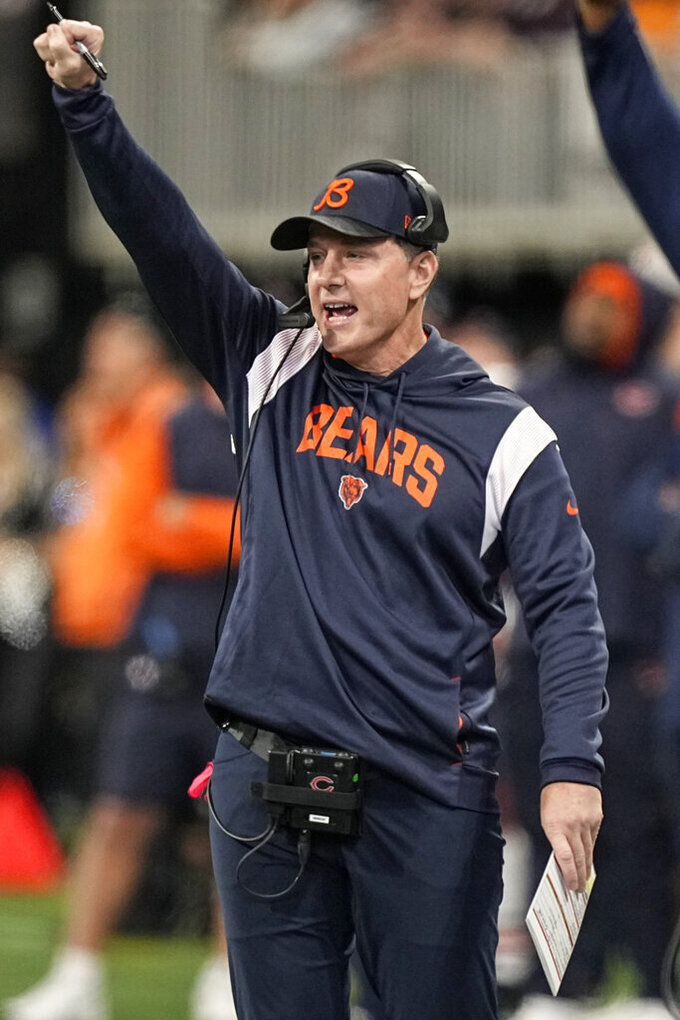 Chicago Bears head coach Matt Eberflus speaks to players during the first half of an NFL football game against the Atlanta Falcons, Sunday, Nov. 20, 2022, in Atlanta. (AP Photo/Brynn Anderson)

TURNOVER DIFFERENTIAL: Bears plus-1; Jets plus-1.

BEARS PLAYER TO WATCH: QBs Justin Fields or Trevor Siemian. The big question for the Bears this week was whether Fields would start after he injured his left (non-throwing) shoulder on Chicago’s final drive last week. Fields said it's a separated shoulder with partially torn ligaments. The Bears would need to use a more conventional style if Fields is unavailable. Siemian has 29 career starts, including one with the Jets in 2019.

JETS PLAYER TO WATCH: QB Mike White. The Jets benched the underachieving Zach Wilson, who was 9 of 22 for a measly 77 yards with several wayward throws in the loss to the Patriots. Coach Robert Saleh called the move a chance for Wilson, the No. 2 overall pick last year, to “reset.” It might also spark the offense to have White under center. He made headlines last year in his first NFL start when he threw for 405 yards and three touchdowns with two interceptions in a 34-31 victory over Cincinnati.

KEY MATCHUP: The Bears' running game vs. the Jets' defensive front. Chicago has the NFL's top-ranked rushing offense, with Fields leading the way with 834 yards on the ground. Even if he doesn't play, running back David Montgomery (501 yards) gives the Bears a solid playmaker. New York has been mostly solid against the run this season and are among the NFL leaders with with 32 sacks, routinely getting into the backfield.

KEY INJURIES: Fields was listed as questionable after being limited in practice all week. ... Starting RG Teven Jenkins (hip) missed his second consecutive game last week despite being active. Coach Matt Eberflus said the second-year lineman was only healthy enough to back up, but he was removed from the injury report this week. ... DT Sheldon Rankins (elbow) will miss his second game in a row. ... WR Corey Davis (knee) returns after being sidelined three games. ... Rookie CB Sauce Gardner was dealing with a calf ailment that limited him early in the week, but he'll play after fully participating in practice Friday.

STATS AND STUFF: Chicago enters having lost four straight and six of seven. ... The Bears allowed four sacks last week. ... After coming up short at Atlanta, Chicago has failed on five straight game-closing two-minute drills. ... Fields ranks fifth in the NFL in rushing with 834 yards — tops among quarterbacks. He has run for seven touchdowns this season, including six in the past five games. He joined Arizona's Kyler Murray as the only QBs in the Super Bowl era with both a passing and rushing touchdown in five straight games. Murray had a five-game run in 2020. Fields ranks second in yards per carry at 6.84, while RB Khalil Herbert is fourth at 5.95. ... Cole Kmet is tied for second among TEs with a career-high five touchdown receptions. ... S Eddie Jackson is tied for third with four interceptions. ... The Jets managed just 2 total yards on seven possessions in the second half against the Patriots. It was the fourth-fewest yards by any team in a second half since 2000. ... White, a fifth-round pick by Dallas in 2018 out of Western Kentucky, will make his fourth career start. He has five touchdowns and eight interceptions in four regular-season appearances. ... New York has relied heavily on the running game the past several weeks, but was stymied by New England last week while getting just 59 yards on 23 attempts, an average of 2.9 yards. ... The Jets' 32 sacks through 10 games are just one less than they had in 17 games last season. DT Quinnen Williams leads the way with a career-high eight. ... Since Week 4, New York's 58 quarterback hits lead the NFL. ... The Jets will induct former CB Darrelle Revis into the team's Ring of Honor at halftime. Revis, a semifinalist for the Pro Football Hall of Fame in his first year of eligibility, was one of the NFL's top shutdown cornerbacks in his prime. Revis played for the Jets from 2007-12 and 2015-16, with stops in Tampa Bay (2013), New England (2014) and Kansas City (2017).

FANTASY TIP: Given the Jets' struggles on offense and the uncertainty of how White will fare in his season debut means you should probably steer clear of anyone on New York. For the Bears, Fields is a no-brainer start if he plays. Regardless, it could be tough sledding for Montgomery against the Jets' defense, so lowering your expectations for his rushing totals might be in order.