Jets' Wilson focused on improving, not his critics, doubters 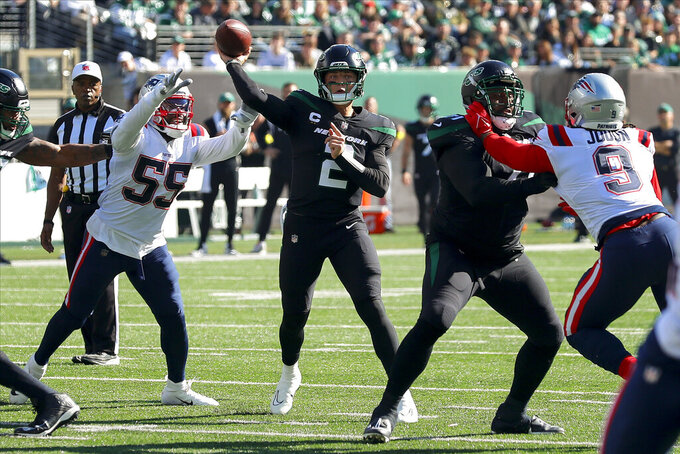 The critics of Zach Wilson seem louder this week, the doubts about his ability at an all-time high.

The word “bust” has been floated around by some fans and reporters when referring to the New York Jets quarterback, who's coming off the worst game of his second NFL season.

A four-game winning streak muted much of it until last Sunday, when Wilson's three-interception performance in a 22-17 loss to New England raised eyebrows — and had even some of last year's No. 2 overall pick's biggest supporters wavering.

“I don’t look at any of that stuff,” Wilson insisted Thursday. “I focus on what’s going on in this building with me and the guys, what my coaches are seeing, things that go on in the game, and then we try to learn from them the best we can.”

Wilson's teammates and coaches have publicly backed him this week, noting how the Jets are 4-1 with him as the starting quarterback and how he's a big reason for it.

Yes, they acknowledge Wilson made some mistakes in the loss to the Patriots. But by no means are they ready to throw in the towel on him becoming a franchise-type quarterback.

“Like I’ve said numerous times, he’s made of all the right stuff,” offensive coordinator Mike LaFleur said. "He’ll learn from it. He’s approached this week of practice, I’m not going to say any different, but he’s in the right mindset to go do right for himself.

“And more importantly, this team.”

Wilson and the Jets face the AFC-leading Buffalo Bills on Sunday. The Josh Allen-led offense is ranked No. 1 overall in the NFL, with the defense at No. 3 overall. So, stopping them from scoring while keeping up with them will be in the game plan.

“It’s going to be a great challenge for us,” Wilson said. “I’m really excited for it.”

Wilson, who has three TD passes and five interceptions this season, will likely need to make some plays — and limit the type of mistakes that plagued him against New England.

Allen has watched Wilson a bit from afar, and recognizes he has “some extreme ability.” The two have hung out socially a few times in the offseason, and talked about the responsibilities — and pressures — of being a starting NFL quarterback.

“He’s a great, great dude,” Allen said. “I can see why his teammates love him. He goes out there and plays hard. It’s not easy in this league, especially early on in your career and in such a media difficult city. It’s a guy playing really hard trying to make plays for his team.”

Allen knows about that. He's one of the NFL's most dynamic playmakers now, but struggled with consistency early. The Jets can only hope Wilson takes off the way Allen did, but they know it can't happen alone. Just as Wilson's struggles aren't purely on him.

Two of Wilson's interceptions last Sunday were what he called “bonehead plays,” but he was also constantly on the run as the Patriots put heavy pressure on him while slicing through the offensive line. After relying heavily on the rushing attack the previous three games, rookie Breece Hall's season-ending ACL injury was evident as the ground game sputtered.

So, Wilson was trying to make plays and ended up throwing 41 times for a career-high 355 yards.

But coach Robert Saleh preached earlier this week that boring plays — throwing it away, not taking chances — are sometimes the best plays. Wilson had no turnovers in the Jets' previous three games, all wins.

“Ultimately, it’s on me to make sure this whole offense is making the right decisions and doing right longer,” LaFleur said. “The NFL is tricky. It’s hard to win football games. A lot of times it’s not pretty, and it doesn’t need to be pretty. We’re there to support him.”

And a good performance — and maybe even a win — might silence the critics again.

At least for a week.

NOTES: WR Corey Davis (knee) didn't practice for a second straight day and could miss his second game in a row. ... DT Quinnen Williams was selected the AFC's defensive player of the month for October. ... WR Garrett Wilson was selected the NFL’s Pepsi Zero Sugar rookie of the week, his second such honor this season after also winning it in Week 2. The Jets have won it the past five weeks, including Wilson for Week 8, CB Sauce Gardner (Weeks 5 and 7) and RB Breece Hall (Weeks 4 and 6).