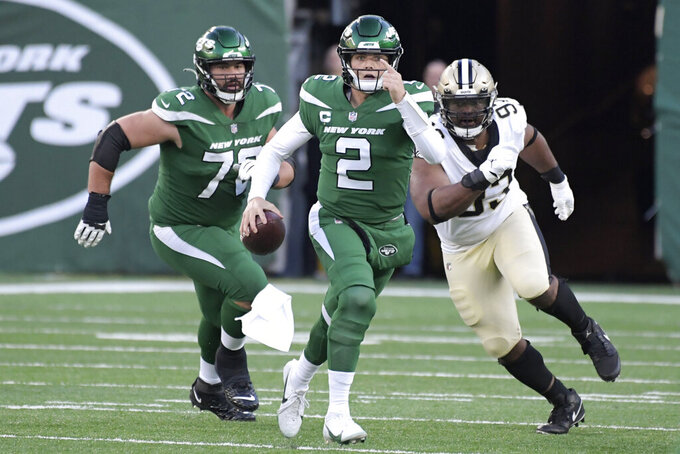 NEW YORK (AP) — Zach Wilson bounced a few passes, sailed a few others over receivers' heads — and his eyes were all over the place.

The New York Jets rookie quarterback followed up perhaps his best performance in the pros with one of his worst. He wasn't helped by a handful of drops, either. But taking a step back this late in the season is a troubling development.

“I don’t think it’s obvious or easy or everyone would play quarterback if it was easy,” Wilson said after he went 19 of 42 for 202 yards in a 30-9 loss to New Orleans on Sunday. "I think part of it is really just trusting what I see. Throwing’s always been, I feel like, my strong suit my entire life. Throwing the ball has always been easy, so I just need to make it easy.

And the Jets need to trust Wilson can improve on the shortcomings and struggles that have marked his first season.

“Zach is the future of this organization,” coach Robert Saleh said Monday. “He’s the No. 2 pick, he’s extremely talented, he’s got a great head on his shoulders, he’s a phenomenal young man and these are the types of games he has to go through. He has to learn how to play football in the NFL. He has to get these reps.”

Wilson played without wide receivers Corey Davis and Elijah Moore and running backs Michael Carter and Tevin Coleman, forcing Wilson to play without some of his best playmakers. But great quarterbacks raise the level of those around them, and Wilson is clearly far from being that.

It comes with supreme confidence, and that comes from consistently good performances. In the final four games of the season, it will be imperative for the Jets to do what they can to make sure Wilson is trending up as they enter the offseason.

“He handles it in stride,” center Connor McGovern said. “He does not lack confidence.”

Since Wilson returned from a four-game injury absence, Saleh said the Jets have been working “relentlessly” on his tempo, footwork and eyes, him working through progressions and not overanalyzing what he’s seeing.

The coach thought Wilson's overall tempo was “pretty good,” but his eye placement wasn't as consistent against New Orleans as it was in the Jets' loss to Philadelphia last week.

“In Houston (two weeks ago), you could point to his footwork," Saleh said. "I thought all of it was working against Philadelphia in the first half. And then yesterday, you can point to his eyes. Just stuff that we've got to remain consistent with as it pertains to his playing ability.”

One positive for Wilson on Sunday: It marked the first time he played a full game and didn't throw an interception.

“He took some jumps,” Saleh said. “Obviously it wasn’t where he wants to be, but at the same time, I do think with his decision-making over the past couple of weeks, it’s getting better.”

Hopefully the team's Wi-Fi signals at their homes. Saleh moved all of the meetings this week to virtual as a precaution because of the rise in COVID-19 cases around the league and two players — RB Austin Walter and DL Ronnie Blair — dealing with non-COVID-19 illnesses.

There's plenty to choose here, but the defense gets called out again. The Saints were able to roll up 203 yards rushing against the Jets, despite New Orleans' game plan going in being very clear that it was going to run the ball. Alvin Kamara had 120 yards and a TD on 27 carries in his return from a four-game absence.

Saleh insisted the Jets were improved against the run and the numbers were skewed by the late 44-yard TD run by quarterback Taysom Hill, who ran for two scores.

Eddy Pineiro. The Jets' kicker carousel might have stopped — maybe. Pineiro was New York's third kicker in as many games, following Matt Ammendola and Alex Kessman, and made all three of his field-goal attempts against New Orleans to account for all of the Jets' scoring.

Denzel Mims. The second-year wide receiver has had a rough season, marked by an offseason bout with food poisoning, struggling to find a role in the offense and sitting a few weeks while recovering from the coronavirus. He was expected to see increased action Sunday, but he was called for penalties on consecutive plays and was benched for a stretch in favor of practice squad callup DJ Montgomery.

45% — Wilson's completion rate against the Saints was the second lowest this season in the NFL by a starting quarterback with at least 40 attempts. The lowest? The 41.5% by former Jets QB Sam Darnold for Carolina in Week 6 against Minnesota.

The Jets will head to Miami to face the AFC East-rival Dolphins for the second time, looking to even the season series after a 24-17 loss at home on Nov. 21. But the Dolphins are coming off their bye-week break and are on a five-game winning streak.