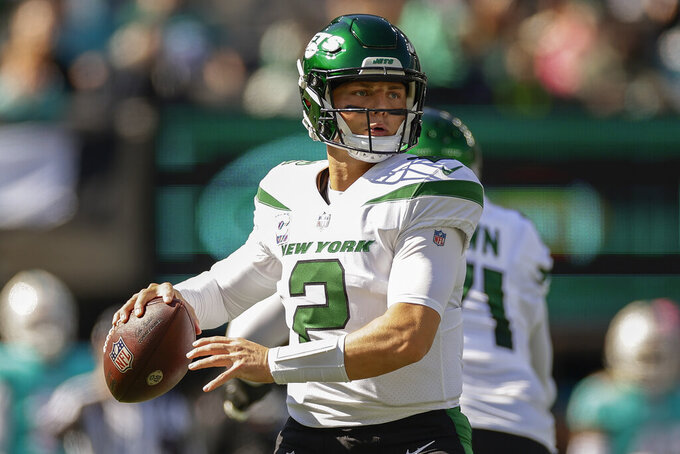 FLORHAM PARK, N.J. (AP) — Zach Wilson tried to be cool. Or at least not let on how much of a thrill the moment was for him.

The New York Jets quarterback was on the practice field last year during training camp, chatting it up with Aaron Rodgers — the guy Wilson idolized as a youngster in Utah.

“I don't know if I've ever mentioned that him,” a smiling Wilson said Thursday. “I've been watching him since I was a little kid, trying to replicate the way he throws and the way he plays the game.”

Wilson remembers being about 13 years old when he first started playing football in Draper, Utah, and seeing Rodgers on TV tossing passes all over the field.

“We didn’t have an NFL team in Utah, so I wouldn’t say I was a Packers fan,” Wilson said. “But I was an Aaron Rodgers fan. I grew up watching him and I always liked to watch their games because of him and kind of where he was at.”

Even during his college career at BYU, Wilson would try to incorporate aspects of Rodgers' game into his own.

“A little bit of everything,” said the 23-year-old Wilson, who's nearly 16 years younger than Rodgers. “He's extremely accurate underneath, I think the way he's able to place the ball and you see his completion percentage, how he takes care of the ball. And then he's able to be that athletic, scramble-type quarterback, off-schedule a little bit and be able to create plays out of nothing while protecting himself.”

During the Jets' trip to Green Bay for joint practices in August 2021 — four months after he was the No. 2 overall pick — Wilson was able to spend extra off-field time with Rodgers. He picked the Packers star's brain and got a feel for what being an NFL quarterback is like. They also kept in touch for a few weeks after meeting.

“It was cool kind of just to watch him, just the environment,” Wilson said.

More than a year later, the two are squaring off in the regular season, Sunday at Lambeau Field. And forget being star-struck. Wilson wants to win.

“Being on the same field as him is cool, but we're attacking their defense, so it's a little bit different,” Wilson said. “It's probably the same thing as last year when we were playing Tampa Bay, it was like, ‘Wow, we’re playing Tom Brady. I've watched this guy since I was born,' which is kind of crazy.

“So I'm sure it'll be the same kind of thing in this game.”

Wilson is two games into his return from a knee injury that occurred in the preseason opener, and he has acquitted himself well so far.

Packers coach Matt LaFleur — Mike's older brother — has seen marked improvement by Wilson since his team practiced against him 13 months ago.

“Just the poise that he’s showing,” LaFleur said. "Everybody could see his talent coming out in the draft in terms of his ability to throw the football, a natural thrower, his athleticism, his ability to throw on the move. But I think where you’ve seen that growth, and I think that’s true for a lot of young guys, is just the poise that you display in the pocket when things get a little muddy or things aren’t going your way.

“He obviously has responded well to adversity.”

And in the clutch.

In the fourth quarter of his first two games this season, Wilson has led the Jets to touchdowns on five of six offensive possessions. The only drive that wasn't a TD was the game-ending kneel-down against the Dolphins last week.

According to the Jets, Wilson is the first quarterback in franchise history to direct TD drives on five consecutive final-quarter drives over two games.

“I mean, this is what we know him to be, to be honest,” wide receiver Braxton Berrios said. "This is Zach. We’ve grown to know and love and expect it out of him. He’s a baller. And that’s what he’s showing.