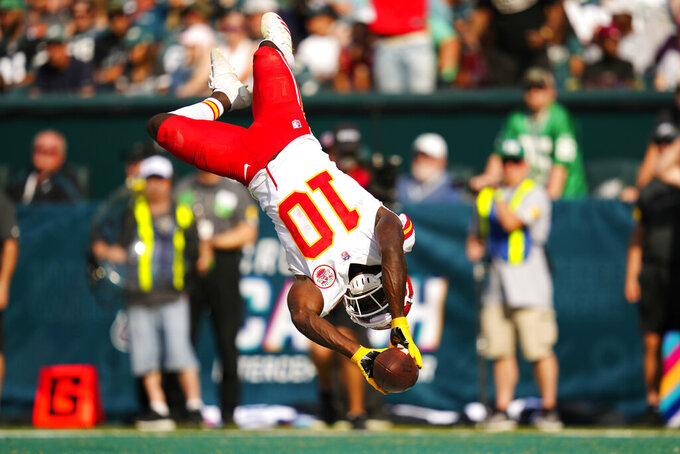 FILE - Kansas City Chiefs wide receiver Tyreek Hill (10) celebrates in the end zone after scoring a touchdown during the second half of an NFL football game against the Philadelphia Eagles on Sunday, Oct. 3, 2021, in Philadelphia. The Kansas City Chiefs traded wide receiver Tyreek Hill to Miami for a package of draft picks on Wednesday, March 23, 2022, and the Dolphins are giving the three-time All-Pro a $120 million, four-year contract extension, a person familiar with the moves told The Associated Press. (AP Photo/Matt Slocum, File)

KANSAS CITY, Mo. (AP) — The Kansas City Chiefs traded Tyreek Hill to Miami for a package of draft picks Wednesday, and the Dolphins are giving the three-time All-Pro wide receiver a $120 million, four-year contract extension that makes Hill the highest-paid player at his position in NFL history.

The Chiefs will get the Dolphins' first- and second-round picks and their fourth-rounder in this year and fourth- and sixth-round picks next year, along with some much-needed salary cap relief in the latest major NFL trade.

"It’s hard to put into words what Tyreek has meant to Chiefs Kingdom,” Chiefs general manager Brett Veach said. “He’s a special player, one of the best in franchise history. He’s been a large part of our success, including our Super Bowl championship run. This decision was incredibly difficult, but we felt it was a necessary move in the best interest of the team, and also for Tyreek. We wish him the best as he continues his career.”

“I'm very excited to be joining the Miami Dolphins and get to work,” Hill said in a statement. "However it's hard thinking about the memories, people and fans that made my time in Kansas City so great.

“I'll never forget getting the call in 2016 that my dream to play in the NFL was coming true. I worked hard every day to show my appreciation for you taking a chance on me," Hill continued. “To the fans, thank you for your support. Playing for you has been one of the greatest things I've done in my life.”

The Chiefs had been in discussions with Hill on a contract extension in part because they sought relief from a tight salary cap situation. But talks had stalled over the past few days, and Hill's representatives requested permission to seek a trade, which came together quickly with multiple teams expressing interest in him.

The deal clears more than $18 million in salary cap space for Kansas City.

Hill appeared to indicate his time with the Chiefs was over more than a week ago, when the six-time Pro Bowl selection tweeted: “we came a long way thank you chiefs kingdom I'm forever indebted.” He also was keenly aware of the market for top wide receivers, retweeting a post about the Jaguars signing Christian Kirk to a four-year, $84 million deal.

It has been a wild NFL offseason when it comes to big names, even though the new league year is just a week old.

The Seahawks traded Russell Wilson to the Broncos, Deshaun Watson ended up in Cleveland, the Falcons sent Matt Ryan to the Colts and Carson Wentz landed with the Commanders — and that's just quarterbacks. Adams and Kirk found new homes along with fellow wide receiver Amari Cooper, who went from Dallas to Cleveland. And top-tier pass rushers Khalil Mack (Chargers) and Yannick Ngakoue (Colts) also have landed with new teams.

Hill was a controversial pick by the Chiefs in the fifth round of the 2016 draft, a year after he was accused of punching his girlfriend and got kicked off the team at Oklahoma State. Then, three years ago, prosecutors in suburban Kansas City declined to charge Hill after an alleged domestic violence incident involving his fiancee and their 3-year-old child.

On the field, though, Hill has surpassed every expectation, giving coach Andy Reid an outlet for his offensive creativity while teaming with Pro Bowl quarterback Patrick Mahomes to form one of the league's elite pass-catch duos.

Hill helped the Chiefs win back-to-back AFC titles along with their first Super Bowl in 50 years after the 2019 season. He also helped them get back to the conference championship game in January before losing to the Bengals, capping arguably the best year of his career: He had a club-record 111 catches to go with 1,239 yards and nine touchdowns.

“I am happy for Tyreek. He has grown as a man and player here in Kansas City,” Reid said. ”This move will also benefit the Chiefs. We now have cap space and additional draft picks to grow as a football team."

The trade for Hill is another major move by the Dolphins, who are trying to build around quarterback Tua Tagovailoa and end a streak of five straight years out of the playoffs. They have reached deals with left tackle Terron Armstead, wide receiver Cedrick Wilson and offensive guard Connor Williams, among several others.

The Chiefs have been trying to get younger the past few years, and the possibility that the 28-year-old Hill's speed could soon decline no doubt gave them pause. They also signed former Steelers wide receiver JuJu Smith-Schuster, who is 25, to a club-friendly one-year deal last week and are expected to add at least one wide receiver in the draft.

The trade with Miami means Kansas City could do that with two picks in each of the first three rounds. It also gives them significant draft capital the next two years to address other needs, including defensive back and pass rush.