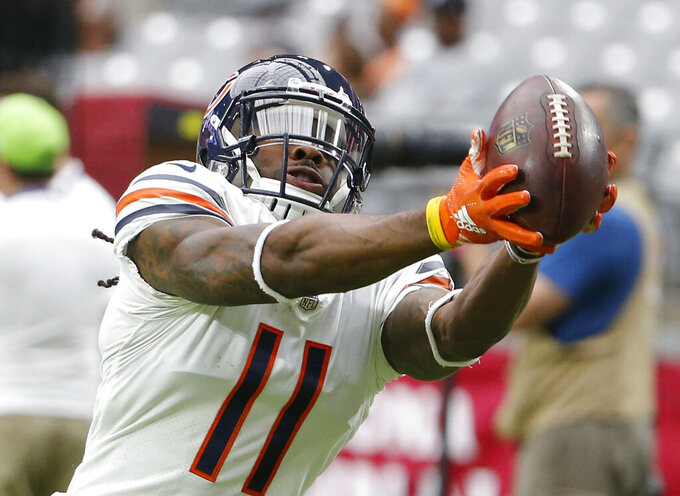 FILE - In this Sunday, Sept. 23, 2018 file photo,Chicago Bears wide receiver Kevin White (11) in the first half during an NFL football game against the Arizona Cardinals in Glendale, Ariz. Kevin White, the former West Virginia star receiver and seventh overall NFL draft choice in 2015, says he's been lucky in life, but decidedly unlucky in his pro football career. “Unlucky with injuries,” White said after his first practice with the New Orleans Saints on Wednesday., Aug. 18, 2021 "But very lucky to still be in this league.” (AP Photo/Rick Scuteri, File)

“Unlucky with injuries,” White said after his first practice with the New Orleans Saints on Wednesday. "But very lucky to still be in this league.”

White, who has played in just 17 games in his injury-riddled career, and who hasn't made a catch in an NFL game since 2018, was cut by San Francisco a week ago. He said the opportunity to join New Orleans “means everything, going on year seven, not really getting the opportunity” to hold a regular role while healthy in the NFL.

During 11-on-11 drills near the end of Wednesday's practice, White caught a quick slant inside the 20-yard line, followed soon after by a touchdown on a short crossing route.

“I'm healthy. I know a lot about the game. I know how the business works,” White said. "It means a lot, man, that someone else gave me a chance to live out my dream and kind of prove myself right and everyone else wrong.”

White had 1,447 yards and 10 TDs receiving in his final college season in 2014. He has just 25 catches for 285 yards without a touchdown since the Chicago Bears made him a first-round draft choice.

He didn't play as a rookie because of a fractured tibia. He got into just four games in his second season when he fractured his fibula. He played just one game for Chicago in 2017, when he broke his shoulder. He saw his most action with the Bears in 2018, playing nine games. After a brief offseason stint with Arizona in 2019, he sat out the regular season before catching on with San Francisco in 2020.

White spent most of last season on the practice squad, playing in just three games without a catch.

Saints coach Sean Payton, who designs and often calls the offense, said New Orleans likes the 6-foot-2 White's combination of size and speed, as well as his relative youth at age 29.

“He’s someone we’d like to work with. I like the way he runs,” Payton said. "Obviously, he’s a former first-round pick.”

In New Orleans, White's been reunited with receivers coach Curtis Johnson, who coached him in Chicago in 2016.

White said he appreciated the way Johnson challenged him with the Bears and figured Johnson's presence on the Saints' staff had something to do with his latest opportunity, although they haven't spoken about it.

White described his career thus far as “very frustrating, just because I felt like I put the work in, I had the right mindset and for whatever reason it just doesn't pan out."

He said praying, support from family, a positive outlook and not wanting to have any regrets has kept him in football.

White's first contract with Chicago paid him more than $15 million.

Money, he said, is not the reason he perseveres. Rather, it's because he still enjoys football and refuses to believe he'll never amount to more than a first-round bust in the NFL.

“It’s just something that I love to do and ... I don’t think I would be able to live with myself knowing that I had a lot of potential and just giving it up," White said. "I don’t ever want to look back and say, ‘Man, I should have just tried one more time. Man, I wish I would have put more work in.’ So I’m going for it until they kick me out of this league.

“My career hasn’t panned out the way I planned it to be," White added. "But that’s a part of the journey that’s going to make the story a lot better.”