With Kupp injured, Rams need other receivers to step up 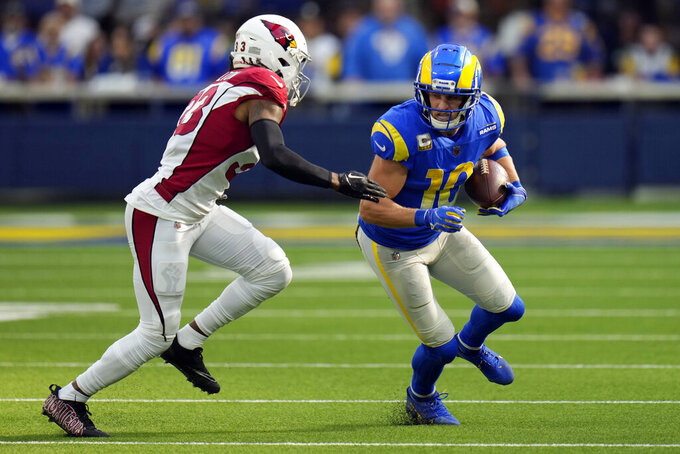 Los Angeles Rams wide receiver Cooper Kupp runs after a catch during the first half of an NFL football game against the Arizona Cardinals Sunday, Nov. 13, 2022, in Inglewood, Calif. (AP Photo/Jae C. Hong)

THOUSAND OAKS, Calif. (AP) — The Los Angeles Rams had all the ingredients to overcome the loss of Cooper Kupp to a torn ACL in 2018.

There were receivers familiar with the system and quarterback, in addition to a strong running game and stability on the offensive line to help mitigate not having Kupp, who had not yet blossomed into a Super Bowl MVP and the fourth player in NFL history to claim the receiving triple crown.

With their star wide receiver out at least four weeks following surgery to repair a high ankle sprain, it will be a much tougher task for the reeling Rams to manage his absence this time.

“Some guys need to step up. They will,” offensive coordinator Liam Coen said Thursday. “It’s going to be a big opportunity for some guys that are going to be able to play in a moment that they may not have been in before.”

Two of the options fitting that description for Los Angeles (3-6) could be second-year receiver Tutu Atwell and undrafted rookie Lance McCutcheon.

A second-round pick from Louisville, the speedy but undersized Atwell was expected to help stretch the field when he was drafted in 2021. He has one career reception for 54 yards in 13 games.

McCutcheon surprisingly earned a roster spot after an outstanding preseason in which the Montana State product showed a knack for making contested catches. He has played four offensive snaps in three games.

The untested players believe they are ready to help starting Sunday at New Orleans.

“As great as Cooper is, we’ve got a lot of weapons in the room. This is a big opportunity for a lot of guys that have kind of been in the shadows for a little bit,” McCutcheon said.

There is plenty of production that needs to be replaced without Kupp.

The inexperienced Atwell and McCutcheon are unlikely to be first options asked to step in for Kupp. Allen Robinson has three 1,100-yard seasons under his belt. Van Jefferson demonstrated flashes of being a difference-maker last year. Others in the mix include receiver-turned-fullback Ben Skowronek and return specialist Brandon Powell.

“We got a committee of guys that really need to step up and they’re taking this thing very seriously to come and do that,” Coen said.

If Atwell or McCutcheon can find some way to contribute, it would likely be a bonus.

“This is our time to step up and show the coaches what we can do,” Atwell said. “The coaches believe in us. Coop believe in us. ... We just gonna go what we got to do to help our team and make sure we do our assignments.”

The Rams overcame not having Kupp for the final six games of the 2018 season and all of the playoffs to reach the Super Bowl.

In spite of their current struggles, there is belief in the locker room the same thing can happen this season.

“I mean, every team go through adversity. It’s just our time at this point right now,” Atwell said.

NOTES: Matthew Stafford (concussion protocol) was a full participant in practice for the second straight day, and backup QB John Wolford (neck) returned on a limited basis. Coen did not rule out having three QBs — Stafford, Wolford and Bryce Perkins — active against the Saints.