Kupp will keep Vikings busy in crucial game vs. Rams 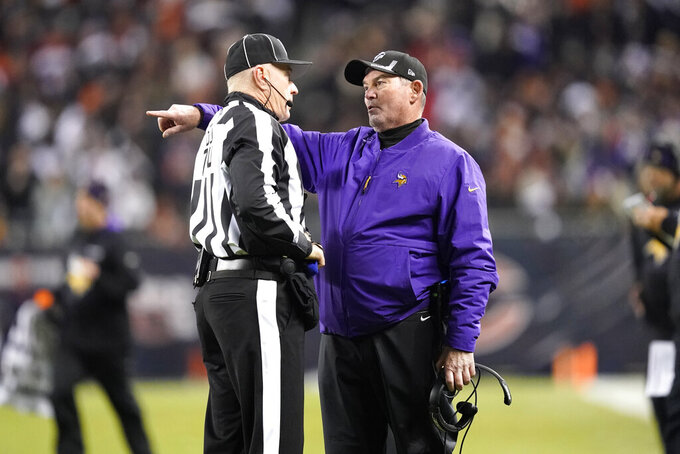 Minnesota Vikings head coach Mike Zimmer, right, talks with down judge Derick Bowers (74) during the first half of an NFL football game against the Chicago Bears Monday, Dec. 20, 2021, in Chicago. (AP Photo/David Banks)

MINNEAPOLIS (AP) — Cooper Kupp and Matthew Stafford have given the Rams one of the NFL's most potent passing connections, a synergy Los Angeles is aiming to use as fuel for a deep run in the playoffs.

It has been quite an air show so far.

With the league lead in receptions (122), yards receiving (1,625) and touchdown catches (14), Kupp is on pace to become the first player to finish first in all three categories since Steve Smith for Carolina in 2005.

Just picked for his first Pro Bowl, Kupp was the star again Tuesday night in a win over Seattle that pulled the Rams (10-4) even with Arizona in the NFC West. The Cardinals have the tiebreaker.

“He and Matthew have a really special rapport. He is so smart. We’re able to move him around and get him in a variety of different spots,” coach Sean McVay said. “The other 10 guys around him have played well, but it’s just a credit to everything that goes into being a special player and then really seeing it all come to fruition like he’s done in these 14 games up to this point.”

The Minnesota Vikings (7-7) will have their hands more than full with Kupp and the Rams on Sunday afternoon, but they won't be caught off guard.

Kupp's breakout game in the NFL came at their expense three years ago, when he contributed nine catches for 162 yards and two touchdowns in a 38-31 victory in Los Angeles.

Jared Goff was the quarterback then, and much of the starting lineup turned over since, but McVay's motion-heavy, multi-formation, high-scoring scheme is going strong once again under Stafford's steady orchestration.

“He’s got a strong arm that can make any throw. He’s played a lot of games, so he’s seen it all. He knows where to go with the ball,” Vikings co-defensive coordinator Andre Patterson said. "He’s a tremendous challenge for us.”

Kupp, who was drafted in the third round out of Eastern Washington in 2017, was behind Brandin Cooks and Robert Woods in the pecking order on Thursday night, Sept. 27, 2018, when Goff passed for 465 yards for the second-most allowed in Vikings history.

The Rams had 556 total yards in that game, one of only three times in eight seasons under coach Mike Zimmer that the Vikings have surrendered more than 500 yards. McVay continually had a talented defense out of sync with misdirection plays and vulnerable matchups. Linebacker Anthony Barr wound up in coverage on three of the touchdown passes in that game, including one by Kupp.

Kirk Cousins passed for 422 yards and three touchdowns for the Vikings, going toe to toe with Goff until losing a fumble on a sack near midfield with 1:18 left. That sealed the victory for the Rams, who started 8-0 that season and went to the Super Bowl.

Kupp is closing in on Calvin Johnson’s single-season record of 1,964 yards receiving set in 2012 for Detroit, also with Stafford throwing to him.

Kupp’s speed, precise route-running and separation ability have been a nightmare for almost every defense he has faced, and he has a jaw-dropping 13 games with at least 90 yards receiving. His streak of 10 such games in a row is the longest in the Super Bowl era that began in 1966.

“He’s as smart of a guy I’ve played with at that position, and then he’s got a ton of skills,” Stafford said. “Just kind of what you want in a receiver. He does a little bit of everything really well and just turns into a really great player.”

The Vikings lead the NFL with 44 sacks, while the Rams are fifth with 39 and a dynamic trio of pass rushers. Aaron Donald, Leonard Floyd and Von Miller all sacked Russell Wilson in LA’s win over Seattle on Tuesday, with Miller finally getting his first sack since moving to the Rams.

They’re also getting an impressive amount of pressure from Greg Gaines, a third-year nose tackle who has 3½ sacks and has hit the quarterback five times in the last three games. Keeping Cousins uncomfortable in the pocket will require a group effort, one the Rams have excelled at this season.

Though the Vikings won their last two games, Cousins struggled to find a rhythm as much against Pittsburgh and Chicago as he has all year and the pass rush was a big reason why.

“We’ve got to communicate well and make sure we’re targeting the right people and then understand that sometimes they got you and they’re bringing more from one side than you can block,” Cousins said. “That’s when you have to be ready to get rid of the ball.”

The Rams had more than two dozen players spend time on the COVID-19 reserve list last week, forcing their game against the Seahawks to be postponed by two days. That has left them only four days to rest and prepare for the Vikings, but the indefatigable McVay has been just the right leader for one of the NFL's most talented teams to navigate such a setback.

“The guy is ultra-resilient. He’s really smart and confident in himself, and he should be,” Stafford said. “He’s got a great mind and a great ability to connect with people.”

The Rams can clinch a spot in the playoffs with a win, but the Vikings have a lot more work to do even though they currently control a three-way tie for the third NFC wild card spot. They'll be without running back Dalvin Cook, who landed on the COVID-19 reserve list on Thursday. Alexander Mattison, who missed the Chicago game with COVID-19, will take the lead role instead.