Kwon Alexander having 'legendary' effect on Jets as leader 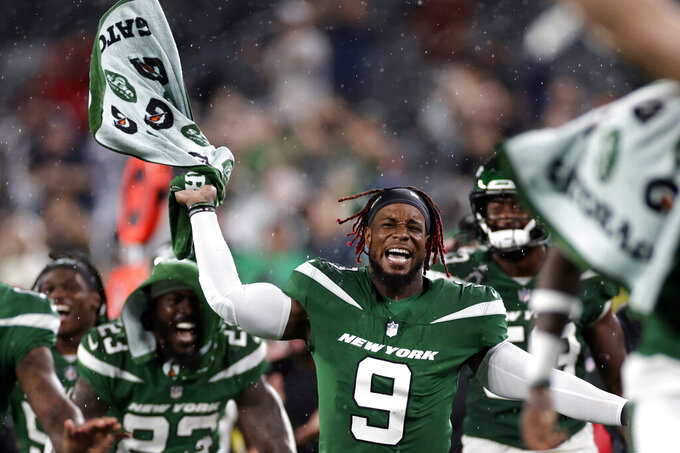 FILE - New York Jets linebacker Kwon Alexander (9) reacts against the Atlanta Falcons during a preseason NFL football game Monday, Aug. 22, 2022, in East Rutherford, N.J. Alexander is big on being different with his greetings and goodbyes. Ask the Jets linebacker how he's doing, and he'll reply: “legendary.” Or when he's wrapping up a session with reporters, he'll close with: “Have a legendary day.” (AP Photo/Adam Hunger, File)

FLORHAM PARK, N.J. (AP) — Kwon Alexander is big on being different with his greetings and goodbyes.

Or when he's wrapping up a session with reporters, he'll close with: “Have a legendary day.”

“I started with G-R-E-A-T first and I felt like I was starting with that because I didn't want to use G-O-O-D,” Alexander said Friday. "I wanted it to be something bigger. Everybody used that word and nobody used ‘legendary’ like that, all the time. I didn't want to be average.

“I wanted to put my mind to something I could reach and speak it into existence, so I just started saying it over and over again and it started becoming a habit. And it's just one of those words I say now.”

It's even tattooed behind one of his ears.

Alexander has quickly become an emotional force in the Jets' locker room, setting the tone for a team he wasn't even a part of until the start of training camp in late July.

“Kwon is the one that unhinges us a little bit,” defensive coordinator Jeff Ulbrich said. “He has such juice and passion and energy and swag and confidence. He’s got a little bit of all that stuff that great defensive players have and he also has an amazing ability to affect others and influence others and bring people along with him.”

The 28-year-old Alexander is a powerful presence on the football field, too, with his voice loud and his bone-rattling hits on ballcarriers even louder.

It has been that way his entire playing career, from his college days at LSU to the NFL in stops with Tampa Bay, who made him a fourth-round draft pick, as well as San Francisco and New Orleans before signing a one-year deal with the Jets.

“I think I am that guy, but I would like to put ‘playmaker’ before that first,” Alexander said. "You've got to make plays before anybody respects you or anything, or even tries to go off your energy.

“So I really put myself as a playmaker, then the hype man.”

Alexander had three tackles while starting with C.J. Mosley and Quincy Williams at linebacker in the Jets' 24-9 season-opening loss to Baltimore. Throughout his seven-plus NFL seasons, Alexander has been a disruptor on the field. He has more than 500 combined career tackles, 12 sacks, eight interceptions, 10 forced fumbles and five fumble recoveries.

He also might just lead the league in personality.

“From everything that I heard in San Francisco,” Ulbrich said, "he did the same thing there and kind of unlocked their defense in that way as far as bringing out their personality and bringing edge and bringing passion and juice and the 17,000 handshakes that he has and all the celebrations that he has.

“He just brings so much in that way. We’re lucky to have him.”

Within his first few hours of joining the Jets, Alexander took Williams aside on the practice field and shared some things he noticed.

“He came to me as a brother, with a few little tips to help me out," Williams said. "Coming right in and helping me see the game faster. He said: ‘You’re a baller and these details can help.’ I appreciate it, for real.”

Leadership comes natural to Alexander, who said he never wanted to be a follower.

That was one of the traits that resonated with Jets coach Robert Saleh, who was Alexander's defensive coordinator for two seasons in San Francisco. Last month, 49ers linebacker Fred Warner said during a YouTube interview with his wife that Alexander was his favorite teammate ever.

“Kwon comes in with his ‘legendary’ mindset and he has just this aura about him and this juice and this love of football that is absolutely contagious," Saleh said. "And he extracts it out of people.

"So having those guys scattered throughout the locker room is proving to be highly effective, at least from my experience."

Alexander could see himself on the sideline coaching someday, but “that's a long time from now.”

Until then, he'll just keep having “legendary” days on the field and in the locker room.

“I just go about it by being myself,” Alexander said. "It's what I just do. A lot of people are kind of scared to talk and motivate guys. They'll be in their own shell. But me, I just let it out.

“I've only got one life and one chance to do this, so I might as well have fun with it.”