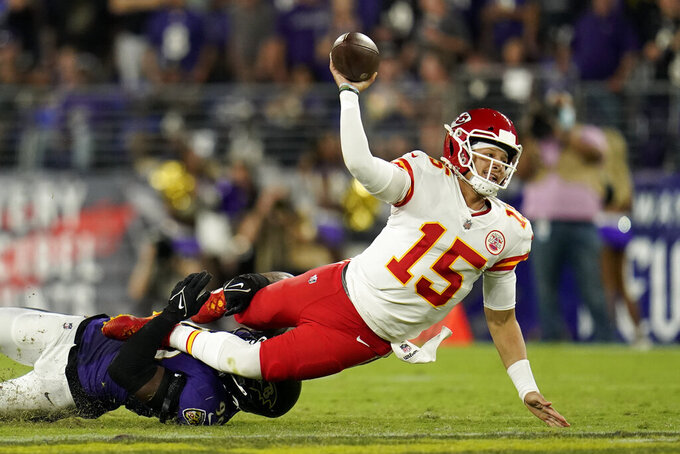 The Kansas City quarterback was intercepted late in the third quarter, one of two turnovers by the Chiefs that led to a 36-35 loss to Baltimore on Sunday night. It was Kansas City’s first September defeat since Sept. 18, 2016. The Chiefs had won 15 in a row in the month since then.

“Turnovers will kill you in this league, and we had two of them down the stretch, crucial time," coach Andy Reid said. "So we’ve got to do better.”

Mahomes was 11-0 as a starter in September with 35 touchdown passes and no interceptions. He threw for three more TDs on Sunday, and Kansas City seemed to be rolling along after Tyrann Mathieu picked off Lamar Jackson twice in the first quarter and left the Ravens playing catch-up.

The Chiefs eventually returned the favor with those two giveaways of their own.

Ahead 35-24 but facing third-and-long near midfield, Mahomes tried to throw a pass while being pulled down. It was picked off by Tavon Young, and the Ravens drove 56 yards for a touchdown to make it 35-30.

After a Kansas City punt, Baltimore scored again to take the lead — but the Chiefs were still in good shape when they drove into field goal range as the clock wound down. On second-and-3 from the Baltimore 32, Clyde Edwards-Helaire fumbled the ball away. Kansas City never got it back.

Odafe Oweh, the rookie who forced and recovered the fumble, was drafted by the Ravens in the first round — with a pick they acquired when they traded offensive lineman Orlando Brown to the Chiefs.

“We got into field goal range pretty quickly there,” Mahomes said. “Then we were pretty much just trying to get down as close as we could to let (Harrison) Butker kick the field goal. Dude made a good play. He was getting blocked, he threw his hand out, hit it directly on the ball."

The turnovers were especially costly on a night the Chiefs allowed 251 yards rushing. Although Kansas City makes the game look incredibly easy sometimes, the defense left the Chiefs vulnerable — and then a couple mistakes cost them.