The Latest: Md. allowing up to 10% capacity at NFL stadiums 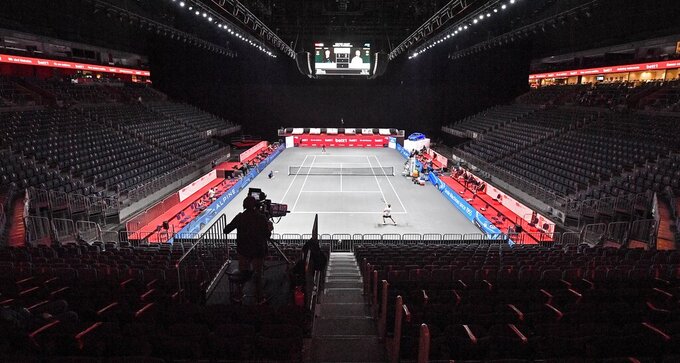 Seats are empty due to the coronavirus orders at the Lanxess Arena in Cologne, Germany, during the ATP bett1HULKS Indoors tennis match between Germany's Alexander Zverev and Spain's Fernando Verdasco, Thursday, Oct. 15, 2020. Zverev won the match 6-4, 6-1. (AP Photo/Martin Meissner)

Maryland will allow up to 10% capacity at the two stadiums in the state that are home to NFL teams, Gov. Larry Hogan said Friday, meaning several thousand fans could attend games.

The announcement affects M&T Bank Stadium, where the Baltimore Ravens play, and FedEx Field in Landover, Maryland, where the Washington Football Team plays.

Face coverings and physical distancing will be required. Social gatherings such as tailgating will be prohibited.

The stadiums have been limited to 250 spectators at recent games. Those seats have been set aside mostly for players’ relatives.

The Republican governor wrote on Twitter he is taking the steps as Maryland’s key health metrics for the coronavirus remain “low and stable.”

Tennis Canada has postponed three Challenger pro events because of the COVID-19 pandemic.

The organization announced Friday that the Calgary, Alberta, and Drummondville, Quebec, National Bank Challenger men’s events and the Fredericton, New Brunswick, women’s event are off the schedule.

The Calgary event was scheduled for February; Fredericton and Drummondville were slated for March.

Challenger events offer opportunities for pros who can’t get into tour-level events.

Toronto FC will play before fans at its Nov. 1 game against Inter Miami CF in East Hartford, Connecticut.

The MLS club said Friday it has the green light from local authorities to have up to 5,000 spectators at the 38,000-seat Pratt and Whitney Stadium at Rentschler Field, which is Toronto’s home away during the pandemic.

“Our players feel the support already and having some fans will make it even better,” Toronto President Bill Manning said in a statement.

Toronto has played before fans just twice in 17 games since the league halted play March 12. Those games were in Montreal, where local authorities allowed 250 fans into Saputo Stadium.

The Carolina Panthers have placed guard/center Tyler Larsen on the reserve/COVID-19 list, five days after he played against the Atlanta Falcons.

Falcons defensive tackle Marlon Davidson was placed on the reserve/COVID-19 list on Tuesday after Carolina defeated Atlanta 23-16. Larsen did not start for the Panthers in that game, but did see action as a reserve.

The Panthers still practiced on Friday in preparation for Sunday’s home game against the Bears.

The Arizona Department of Health Services is permitting the NFL’s Cardinals to host a crowd of up to 1,200 people for the team’s next home game against the Seahawks on Oct. 25.

The Cardinals had approximately 750 people in the stands for their game against the Lions on Sept. 27. That group was limited to staff, family members and friends and was a test for State Farm Stadium’s COVID-19 protocols.

Seats for the Seahawks game will be available to those with season tickets based on order of account seniority. Masks are mandatory. There will be 600 seats available on both the west and east sides of the stadium and spread out in pods of two.