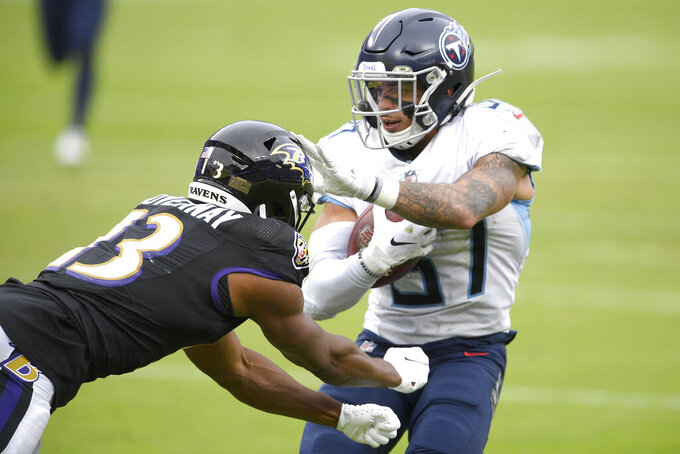 No. 19 Southern California has closed its training complex for the day after an unidentified player tested positive for COVID-19.

The unbeaten Trojans didn’t practice Tuesday and held their meetings virtually while awaiting test results for the rest of the program.

The positive player traveled with USC to Salt Lake City for its victory over Utah last weekend before testing positive Monday. The rest of the program tested negative Monday, and the Trojans are conducting contact tracing for the unidentified player, who is symptomatic and quarantined.

USC is 3-0 heading into its visit from Colorado (2-0) on Saturday at the Coliseum.

No. 24 Tulsa’s football game Saturday at Houston has been postponed due to positive COVID-19 cases at Houston and the ensuing contact tracing of players.

The American Athletic Conference made the announcement Tuesday.

The league said the game may be rescheduled for Dec. 19, if neither team is a participant in the American Athletic Conference Championship Game. Tulsa is 5-0 in league play.

This is the fifth Tulsa game that has been shifted since the season started. Matchups against Oklahoma State, Arkansas State, Cincinnati, and Navy also have been moved at some point.

The Baltimore Ravens have placed outside linebacker Pernell McPhee on the reserve/COVID-19 list, making him ineligible to play Thursday night in Pittsburgh.

The 31-year-old McPhee has 26 tackles and two sacks this season.

The Ravens cancelled practice Tuesday. All of the team’s daily activities were held virtually.

The UAB-Southern Mississippi football game scheduled for Friday has been canceled because of COVID-19 issues within the Golden Eagles’ program.

The game was set to be the Blazers’ finale at Legion Field before moving to newly built Progressive Stadium.

Southern Miss cited positive coronavirus tests and subsequent contact tracing for the cancellation. The Golden Eagles’ next scheduled game is next Friday at UTEP.

UAB says it will continue to work with Conference USA on the remaining regular-season schedule.

The Blazers have had three straight games canceled because of the virus. They haven’t played since a double-overtime loss to Louisiana Tech on Oct. 31.

Southern Miss has previously had to postpone and reschedule games with Florida Atlantic and UTEP.

Georgia will play Florida A&M on Sunday in a men’s basketball game that was scheduled when the Bulldogs’ planned contest against Gardner-Webb was canceled due to COVID-19 issues in the Gardner-Webb program.

Tickets issued for the canceled Gardner-Webb-Georgia game will be honored for the game against Florida A&M.

Georgia opens its season on Wednesday at home against Columbus State.

Ohio State has canceled its women’s basketball game against Akron scheduled for Wednesday evening in Columbus because Akron is affected by COVID-19.

Ohio State said in a release “the decision was made out of an abundance of caution" after Akron shared results of its most recent testing.

The Buckeyes’ men’s basketball game against Illinois State scheduled for Wednesday afternoon in the same arena is still on.

Purdue will be without starting defensive end George Karlaftis for three weeks after testing positive for COVID-19.

A statement from the school's athletic department said the sophomore is self-isolating at home. Karlaftis’ first test Tuesday morning came back positive and a subsequent PCR test confirmed the result, the statement said.

Big Ten guidelines require players who test positive to sit out 21 days, which would keep Karlaftis out of the Boilermakers' three remaining scheduled games — Rutgers, Nebraska and rival Indiana. He could return for the conference’s ninth regular-season game against a yet-to-be- determined opponent, and he would also be able to play in a bowl game.

Karlaftis left the Illinois game in Week 2 with an undisclosed injury and hasn’t played since.

No. 2 Baylor has pushed back the start of its men’s basketball season even further with the cancellation of Sunday’s game at Seton Hall.

Baylor said Tuesday that it was a mutual agreement between the schools to cancel the Big 12/Big East Battle matchup.

The Bears had originally been scheduled to start the season Wednesday night against No. 18 Arizona State, and then play No. 3 Villanova or Boston College on Thanksgiving Day in Connecticut.

Baylor didn’t make that trip after head coach Scott Drew revealed he had tested positive for COVID-19, though he was asymptomatic and no one else on the team tested positive last Friday or Sunday. Drew’s was the only positive team on the team in the past 12 weeks.

The next game on Baylor’s schedule is Dec. 2 against Illinois in Indianapolis, where they are also supposed to play No. 1 Gonzaga three days later.

The Utah Jazz will play homes games before a limited number of fans when the NBA season begins.

The team said Vivint Arena will reopen with a reduced seating capacity of 1,500 in the lower bowl only and limited seating on the suite level. The arena has a capacity of 18,306.

Several safety measures are being put into place, including requiring face coverings, mobile entry, and screening procedures at all entrances.

“The Jazz believe this is a responsible way to start the season from a public health and safety standpoint. Our intent is to increase the number of fans as the season unfolds in compliance with state guidelines,” said Jazz President Jim Olson.

No. 12 Tennessee has extended its pause of team activities through Dec. 4 after receiving the results of COVID-19 testing.

The Vols paused activities Monday and ran more tests after announcing coach Rick Barnes, 66, had tested positive. Tennessee later canceled its Volunteer Classic that had been scheduled to start Wednesday.

Now Tennessee has extended its pause on activities, and the Vols will not play No. 1 Gonzaga in Indianapolis next week as part of the Jimmy V Classic. School officials also announced Tennessee will not play at Notre Dame on Dec. 4. That was a game that had not been announced with the contract not finalized yet.

The Volunteers hope to return to practice Dec. 5 with their first game this season now Dec. 12 hosting Cincinnati.

Both clubs have closed off-ice facilities at their training centers as a precautionary measure and will keep them off-limits through the Thanksgiving holiday.

NHL facilities are open to players for voluntary workouts while the league and union hammer out a deal to begin the 2021 season. The sides have targeted a Jan. 1 start, though that is appearing more unlikely without an agreement in place.

The Baltimore Ravens will conduct all team activities virtually with time running out before their scheduled matchup against unbeaten Pittsburgh on Thanksgiving night.

Running backs Mark Ingram and J.K. Dobbins, along with defensive tackle Brandon Williams, were placed on the reserve/COVID-19 list Monday.

In a statement Tuesday morning, the team said the on-field practice session was canceled “with the health and safety of players and staff remaining the highest priority.”

Hockey Canada says two players at its world junior selection camp have tested positive for the novel coronavirus and Tuesday’s scrimmage has been postponed.

Executive Scott Salmond says those players have been placed in quarantine at Hockey Canada’s team hotel in Red Deer, Alberta.

Players, coaches and staff all took mandatory COVID-19 tests upon arrival at the camp and have been tested regularly for the past 10 days.

The International Ice Hockey Federation is planning to hold the world junior tournament in a quarantined bubble in Edmonton beginning Dec. 26. That’s where the NHL held its Western Conference playoffs and final four over the summer.

Wisconsin says its scheduled women’s basketball season opener Wednesday with Miami of Ohio has been postponed due to COVID-19 protocols regarding Miami’s program.

Wisconsin officials said the two schools are seeking a date to reschedule the game. Wisconsin is continuing to practice and is now preparing to open the season Sunday when it hosts Western Illinois.

The Atlantic Coast Conference is relocating its men’s basketball tournament in March to Greensboro, North Carolina.

The tournament was originally scheduled for Washington, but Tuesday’s announcement came due to the novel coronavirus pandemic. The ACC said the nation’s capital will instead host the tournament in 2024.

Last season’s ACC Tournament was canceled after two days in Greensboro due to the pandemic. The league had previously announced the 2022 event would return to Brooklyn, New York, and Greensboro would also host in 2023 after the March cancellation.