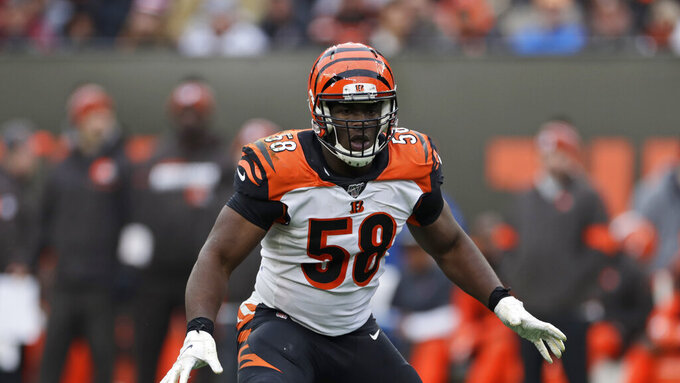 FILE - In this Sunday, Dec. 8, 2019, file photo, Cincinnati Bengals defensive end Carl Lawson (58) keeps watch during the second half of an NFL football game against the Cleveland Browns, in Cleveland. On Monday, March 15, 2021, the Jets agreed to terms on a three-year deal with former Cincinnati Bengals defensive end Carl Lawson, according to a person with direct knowledge of the move. (AP Photo/Ron Schwane, File)

NEW YORK (AP) — Carl Lawson knew a little bit about new Jets coach Robert Saleh from what he had seen and heard around the league. The playmaking edge rusher searched YouTube to find out more.

And he loved what he saw.

“I looked at some of the interviews and I just came away with, like, how impressive he was, the message that he was preaching,” Lawson said Thursday during a video call. “And even a video, I felt like he was talking to me.”

Saleh's hiring — with his “All Gas, No Brake” mantra — by New York was one of several factors that played into Lawson's decision to sign a three-year deal with the Jets this week worth $45 million, including $30 million guaranteed.

The 25-year-old defensive end, who spent his first four NFL seasons in Cincinnati, said the huge contract was, of course, also a factor in him coming to the Jets. But so was the fact his mother is from New Jersey and his father from New York.

Also, the prospect of his expected role as a pass-rushing force — something the franchise has lacked for years — in the defense under Saleh and coordinator Jeff Ulbrich made him excited.

“I was like, ‘Wow!’” Lawson said. “I was thinking about that scheme that perfectly fits my skill set.”

The Jets entered the free agency period with about $69 million of salary cap space, and general manager Joe Douglas should still be plenty busy over the next several days. New York still has needs at wide receiver, offensive line and cornerback, among other spots, and it addressed a few of those areas Thursday.

Former Jacksonville wide receiver Keelan Cole agreed to terms on a one-year deal, according to a person with direct knowledge of the contract. ESPN, which first reported the deal, said it is worth $5.5 million.

Another person with direct knowledge of the contract said the Jets also agreed to terms on a one-year deal with former Chargers offensive lineman Dan Feeney, who can play guard and center.

New York added a veteran to its secondary by agreeing to terms on a one-year deal worth $4.5 million with defensive back Lamarcus Joyner, according to another person with direct knowledge of the contract. The 30-year-old Joyner was released by the Raiders earlier this month after just one season with Las Vegas, where he played slot corner.

He switched from cornerback to safety during his first five NFL seasons with the Rams. He joins Marcus Maye, who received the franchise tag, Ashtyn Davis, J.T. Hassell and Saquan Hampton as safeties on New York's roster.

All the people spoke to The Associated Press on condition of anonymity because the team hadn't announced the deals.

The versatile Feeney spent his first four NFL seasons with the Chargers, who drafted him in the third round out of Indiana in 2017. He has started 57 games in his pro career, mostly at left guard.

The addition of Lawson is a major one for the Jets, who have lacked a consistent pass-rushing presence since the days of John Abraham 20 years ago. The 25-year-old Lawson had 20 sacks in four seasons, including 5 1/2 last year. He has been among the league leaders in quarterback pressure and hits, and the general thought is he's an ascending player who could team with Quinnen Williams to make for a tough duo to defend against up front under Saleh.

“I think it's going to do wonders for my career,” Lawson said. “I'm excited to play here, I'm excited to be a Jet. Yeah, I'm coming in with all the optimism in the world.”

Hardee also joined reporters on a video call, and he — like Lawson — made an excellent first impression. The former special teams standout spent his first four NFL seasons in New Orleans, where he quickly became a favorite of his teammates and Saints fans.

And it is easy to see why.

When asked what makes him so good on special teams, the 27-year-old Hardee stood up and pointed to his heart.

“That’s why I’m good at it — ’cuz I’ve got heart,” Hardee said. "I won’t back down. I’m a maniac on the field. I just play with grit, man. I play like I’m trying to feed my son. I play like I told my mother that I was going to play hard. She's up in the sky watching me. I cannot disappoint her.

"That's why I believe I'm good at special teams — because I will NOT be denied.”

Hardee, who played wide receiver in college at Illinois, was signed by Houston as an undrafted free agent in 2017. He was among the Texans’ final cuts that summer and was signed to New Orleans’ practice squad. While listed as a cornerback, he played just one snap on defense last season. His value is as a consistently good performer on special teams, an area in which the Jets needed vast improvement.

“It means a lot to me just being wanted," said Hardee, who signed a three-year deal worth $6.75 million with $1 million guaranteed. “Being undrafted, you’re rarely wanted. Being undrafted, you get the short end of the stick. So to turn those tables around for me in a positive light, you know, it's a true blessing from God.”