Mahomes vs Murray dominates Week 1 matchup of KC vs Cards 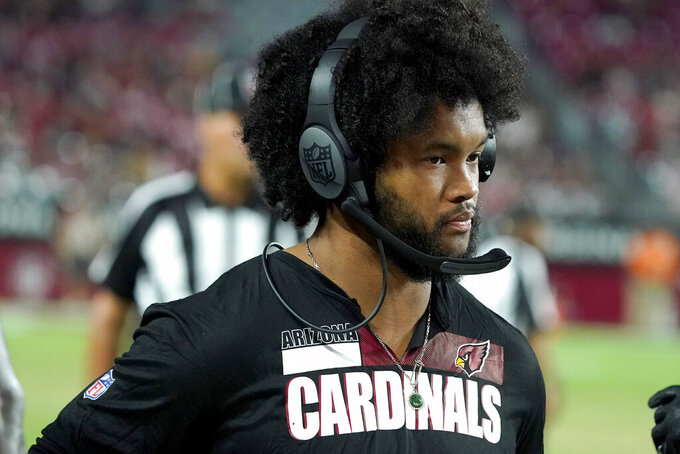 Arizona Cardinals quarterback Kyler Murray calls the plays from the sidelines during the second half of an NFL preseason football game against the Baltimore Ravens, Sunday, Aug. 21, 2022, in Glendale, Ariz. (AP Photo/Darryl Webb)

OPENING LINE: Chiefs by 5 1/2, according to FanDuel SportsBook.

CHIEFS PLAYER TO WATCH: DE George Karlaftis got after quarterbacks throughout the preseason, raising hopes that the first-round pick can help a defense that ranked 29th in sacks last season. Karlaftis has impressed Chiefs coach Andy Reid and the rest of his staff with his relentless energy, though the key now is to point it in the right direction.

CARDINALS PLAYER TO WATCH: WR Marquise Brown. The Cardinals traded for Kyler Murray's former college teammate during the offseason, hoping the chemistry will continue in the NFL. Brown was a 1,000-yard receiver for the Ravens last season. He should get plenty of targets, especially early in the year when DeAndre Hopkins is suspended for the season's first six games.

KEY MATCHUP: Chiefs QB Patrick Mahomes could have some juicy targets in Week 1 considering the Cardinals are thin at cornerback. The Cardinals also have an unproven pass rush since star LB Chandler Jones left for Las Vegas in the offseason.

SERIES NOTES: Kansas City has a big advantage in the series, but that gap gets smaller when the game's not at Arrowhead Stadium. The Chiefs have a 5-0 record at Arrowhead, but just a 4-3-1 mark in other games against the Cardinals.

STATS AND STUFF: It's the first regular-season meeting between Arizona coach Kliff Kingsbury and Mahomes. Mahomes played three seasons at Texas Tech from 2014 to 2016 while Kingsbury was head coach. ... Murray will be playing his first game in the NFL with former college teammate Marquise Brown, a receiver who was added in a trade with the Ravens during the draft. Brown should have a large role, particularly early in the season with Hopkins out. ... Former Cardinals owner Bill Bidwill will become the 19th member of the Cardinals Ring of Honor when he is honored on Sunday. Bidwill died in 2019. ... The Cardinals finished with an 11-6 record last year and made the playoffs for the first time since 2015. ... The Chiefs aim to host the AFC title game for the fifth straight season. They have won the West the past six years. ... Kansas City is going for its fifth straight season of at least 12 wins. ... The Cardinals, who were then in St. Louis, were the first team to play at Arrowhead Stadium in a 1972 preseason game. ... Reid is 8-1 in openers in Kansas City, including 5-0 on the road. ... Reid is entering his 10th season in Kansas City, becoming the first coach in the Super Bowl era with that many seasons with two franchises. He spent 14 years with the Eagles. ... Mahomes needs 7 yards passing to reach 19,000 for his career. He would be the fastest to the mark in NFL history (64 games). ... Chiefs TE Travis Kelce has 29 games of 100 yards receiving. He needs three more to match Rob Gronkowski for most by a tight end in league history. ... Kelce has a streak of 127 consecutive games with a catch, the second-longest streak in franchise history. Tony Gonzalez holds the record with 131.

FANTASY TIP: Arizona's defense emerged as a solid play last season under DC Vance Joseph, but there might be some regression due. The team is thin at corner and is trying to figure out its edge rush situation after losing Jones to the Raiders. Steer clear for now, particularly against the Chiefs.