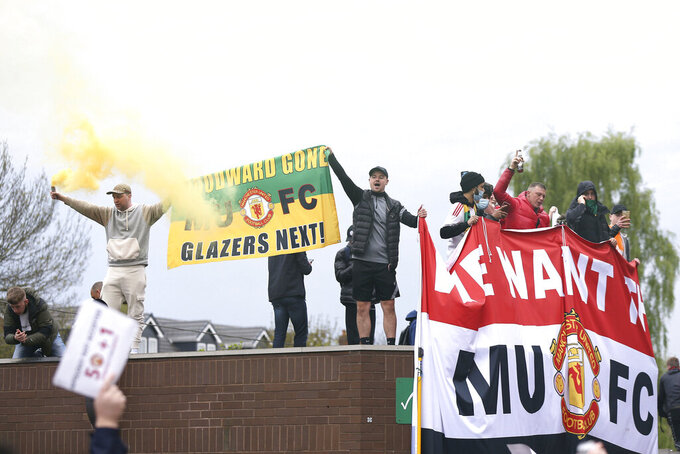 Fans hold up banners as they protest against the Glazer family, owners of Manchester United, before their Premier League match against Liverpool at Old Trafford, Manchester, England, Sunday, May 2, 2021. (Barrington Coombs/PA via AP)

MANCHESTER, England (AP) — The storming of Old Trafford crystalized 16 years of disconnect between Manchester United fans and its distant ownership.

While choosing not to engage with the supporters who are the lifeblood of any club, the Glazer family can't have avoided seeing the levels of rage against them on Sunday. Not when it led to the unprecedented postponement of an English Premier League game due to fan unrest, especially one of the biggest matches of the season between United and Liverpool.

Three months after celebrating success in the Super Bowl with the Tampa Bay Buccaneers, the Glazers' ill-fated bid to lead United into a European Super League made their relationship with fans in England more toxic than ever before.

That led to co-owner Joel Glazer insisting he was “committed to rebuilding trust with our fans,” but there was no sign of that happening in the 10 days between the open letter and Sunday's protests.

A rabble of more than 100 fans was able to stand on the field setting off flares after breaching the biosecure perimeter of the stadium. Outside, thousands of more supporters spent two hours crammed onto the concourse demanding the Glazers sell the club.

Even though officers eventually managed to disperse the crowd just before the scheduled kickoff — with a combination of force using batons and a charge of police horses — the Premier League abandoned any hope of playing the game.

The takeover of United in 2005 began with protests outside Old Trafford that featured burning effigies of the incoming ownership.

Fans were angered that a club without debt was loaded with liabilities that reached a high of 717 million pounds (then $1.1 billion) during the 2008-09 season. It's a debt that has had to be serviced, and cost United, along with dividends to the Glazer family, more than 1 billion pounds in 16 years. It stood at 456 million pounds in December.

But protests against the Glazers that previously peaked with a visible display of dissent during a 2010 Champions League game faded amid the team's success. The club won the Premier League five times in the period from 2007-13 to become the record 20-time champion of England, usurping Liverpool. But since the retirement of Alex Ferguson in 2013 after more than 26 years in charge, the Premier League trophy has proved elusive.

“Your family’s ownership of the club has driven us into debt and decline,” the Manchester United Supporters' Trust wrote on Monday to Joel Glazer, “and we have felt ever more sidelined and ignored.”

It is only two weeks since Glazer tried to lead United into the breakaway European competition as vice chairman of the Super League. Fans were not consulted before the group of European clubs launched the closed competition to replace UEFA's open access Champions League. The rebellion imploded inside 48 hours amid an outcry from the government and fans.

Despite the lack of silverware, and as Manchester City emerged as England's dominant force fueled by Abu Dhabi investment, the protests at United have largely been dormant, simmering in the background. While the Glazers wouldn't speak to MUST, the group toned down its public comments against them and seemed to focus instead on engagement with the administration in Manchester about the matchday experience to secure improvements.

The tone has shifted again with the letter to Joel Glazer requesting by Friday a response to a four-point list of demands to:

— Back a government review and “rebalance the current ownership structure in the favor of supporters";

— Fully consult fans on any significant changes to the club.

Ideally, fans, not just at United, would relish a system such as at Barcelona, which is owned by more than 140,000 “socios,” or members, who democratically choose those who run the club.

The ideal for some United fans would be if England adopted the 50-plus-1 rule from Germany that gives fans the majority of voting rights, nominally to protect clubs from being controlled by private investors. However unlikely, it is being explored by the British government's fan-led review of football governance following the Super League collapse which will seek to protect clubs as local community assets in some form in a country where it is hard to uproot teams to a new location.

To end the current four-year trophy drought, United says there has been more than $200 million invested in players over the past two years — more than any other major European club. That has been funded by the growth of the commercial side of the business, with revenue almost quadrupling since the takeover to 627 million pounds before the pandemic. United has a self-sustaining business model with profit for the owners the priority, which enables them to draw dividends.

Across Manchester at City, it's been about an owner pumping money in since 2008. Funded by the wealth of Abu Dhabi, City is a means of soft power being exerted by the United Arab Emirates, which has been criticized for its human rights and limited political freedoms, as much as it is about transforming men's and women's teams and the surrounding areas. While City fans did oppose the Super League there have been no protests demanding the sale of the club or the exit of club officials. Maybe because City is on the brink of winning the Premier League.

Chelsea owner Roman Abramovich has also invested more than a billion pounds in the west London club since 2003 to turn it into a European power. The aborted Super League plan produced protests in the streets around Stamford Bridge centered on trying to unseat chairman Bruce Buck.

Protests more akin to the vociferous ones at Old Trafford came at Arsenal in the week of the Super League announcement, with fans of the north London club also demanding the exit of their NFL franchise-owning chairman Stan Kroenke. Unlike the Glazers, Arsenal's ownership has engaged with fans through Stan Kroenke's son, Josh, who subjected himself to a video call to take a battering of questions over the Super League debacle.

The Super League reignited concerns in Liverpool about John Henry's Fenway Sports Group ownership and its lack of investment demanded by fans since the club ended its 30-year English title drought. Protests in the streets in 2010 helped to oust the previous American owners — Tom Hicks and George Gillett Jr. — as the club become burdened with debt it could not repay.