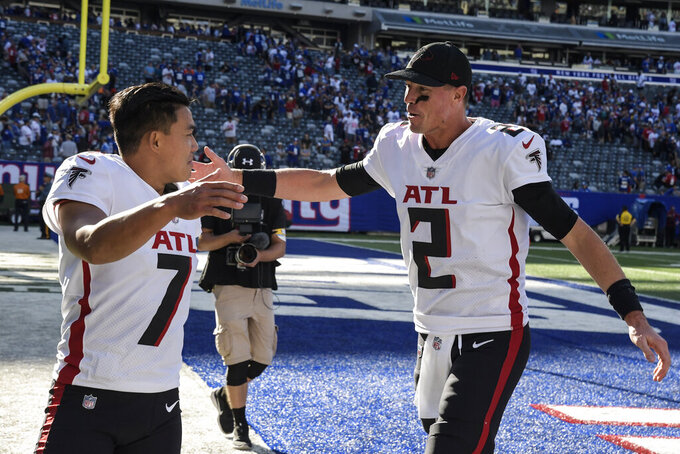 ATLANTA (AP) — It wasn’t pretty for much of the afternoon, but Matt Ryan proved he still has that magic touch.

The Falcons began their 17-14 win at the New York Giants with four consecutive punts, and vintage Matty Ice seemed like a thing of the past. By the end, however, Ryan had engineered his 39th winning drive and his 31st comeback in the fourth quarter. It was his first winning drive since 2019.

“Yeah, I thought it was a grind most of the day and I think it’s a great learning lesson for a lot of our young players that sometimes in this league that’s the way it is, and you’ve got to find a way to get the job done,” Ryan said.

“I thought we battled and then when it was time, we stepped up and made the plays we had to make, and I thought the last two drives were clutch and really good for us. And a lot of different people making plays in those situations, which is going to bode well for us moving forward.”

After the game, Ryan enjoyed a big hug from Smith, who grew a beard last week to change the team’s luck. Ryan thinks the team’s collective belief in Smith and his staff helped the Falcons from sinking into despair. Remember, this is a franchise that started 0-5 last year and 1-7 in 2019.

“Yeah, it’s keep fighting and try and clean up the things we need to clean up and just keep battling, keep fighting, and I thought Art did a great job of that the entire day,” Ryan said. “I thought the assistant coaches on the sideline did a great job of that, and we just had a belief that regardless of how tough it was going we were going to make the plays when we needed to, and that’s a good thing for us moving forward. We have to have that belief as we continue to build as a team.”

The defense came up with several key stops, the most important in forcing a punt right after the two-minute warning. That gave the offense plenty of time to move into field-goal range. Overall, there were eight pass breakups, two sacks, five quarterback hits and two forced fumbles, from Dante Fowler Jr. and Isaiah Oliver.

The Falcons overcame two blowout losses to open the season.

“I wouldn’t say anything changed,” defensive tackle Grady Jarrett said. “We just adjusted. The things that were hurting us were fixable. I think we did a good job of that with our preparation, in believing in ourselves, just knowing we can get over that hump and continue to push. Getting this first win is definitely a step in the right direction.”

The offense needs to come out with more urgency. The Falcons trailed 14-0 and 28-10 at Tampa Bay in Week 2. The Falcons were down 15-6 in the second quarter in the opener against Philadelphia. There also has been no evidence of a deep passing attack through the first three games.

Cameron Nizialek recovered after shanking two punts in Week 2 and nearly losing his job. His net average of 38 was modest, but he executed short punts to pin the Giants back to the 11-yard line, the 14 and the 3.

Though no fault of his own, rookie tight end Kyle Pitts, the No. 4 overall draft pick, was double- and sometimes triple-teamed to get taken away most of the afternoon. Smith was defensive about his use of Pitts, who simply wasn’t open until the final drive, when he caught a critical 25-yarder that moved Atlanta to the New York 25 and set up Younghoe Koo’s winner three snaps later. He also caught a 10-yard third-down pass on the touchdown drive in the fourth quarter.

8:40 — the time of possession on Atlanta’s touchdown drive in the fourth quarter. Ryan was 9 for 11 on the drive.

Shore up the offense’s tendency to start slowly and find ways to get Pitts open before the Washington Football Team visits Mercedes-Benz Stadium on Sunday.