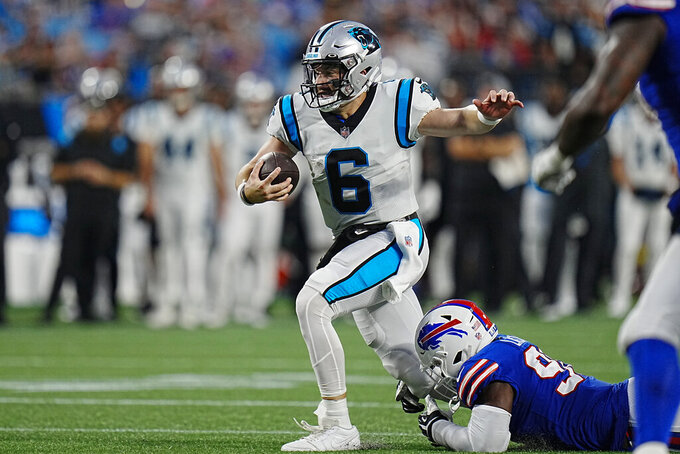 CHARLOTTE, N.C. (AP) — Carolina Panthers coach Matt Rhule is excited about what he's seen out of Baker Mayfield in the short time that he's been with the 2018 No. 1 overall pick.

Now he wants to see what Mayfield can do once he really gets comfortable in the offense.

Mayfield completed 9 of 15 passes for 89 yards and two touchdowns and the Carolina Panthers blanked the Buffalo Bills 21-0 on Friday night in the preseason finale for both teams.

“He's just getting started in this offense,” Rhule said of Mayfield, who was acquired in a trade with Cleveland on July 6. “It's like, ‘hey, what can I do?’ That's what excites me that he has a lot of room to grow.”

Mayfield, who was announced as the Panthers’ Week 1 starter earlier in the week, threw a 2-yard TD pass to D’Onta Foreman and a 19-yard scoring strike to wide receiver Shi Smith against Buffalo’s second-team defense.

The Panthers scored on two of four possessions with Mayfield at the helm.

“I'm just getting started within the offense, but I I feel comfortable with the knowledge of it," Mayfield said. “Now it is just the matter of going out and seeing it and putting into action. It's about chemistry and being on the same page. Now you just have to go out and do and pull the trigger in a live game.”

The Bills rested all of their starters, including quarterback Josh Allen. The Panthers played most of their starters into the second quarter, although running back Christian McCaffrey sat out.

Case Keenum struggled to move the Buffalo offense, going 8 of 13 for 46 yards with one interception that the Panthers quickly converted into a touchdown.

After going three-and-out on the game's opening series, Mayfield showed poise in the pocket leading the Panthers on a 12-play, 53-yard touchdown drive. After a play-action fake, he found Foreman in the right flat for an easy touchdown on fourth down.

After Jeremy Chinn intercepted Keenum's pass that was tipped at the line by Yetur Gross-Matos, Mayfield connected with Smith over the middle for the score. Panthers coach Matt Rhule earlier this week called Smith “one of the true bright spots” of the preseason, adding that he has a chance to win a starting job.

The No. 1 overall pick in the 2018 draft delivered a blow with his shoulder to Bills rookie cornerback Kaiir Elam after scrambling out of the pocket.

The Bills also held out punter Matt Araiza one day after the attorney for a California teenager accused the Buffalo Bills rookie and two of his former college teammates of gang rape last fall.

Third-string quarterback Matt Barkley handled punting duties for the Bills, and even had a 53-yarder that pinned the Panthers inside the 10.

“It’s a situation that is extremely serious,” McDermott said. “Just hard to go through. It’s not a situation that I or we take lightly whatsoever. It’s very serious. I understand the sensitivity of the situation. It’s clear we have work to do to continue to figure this out. And we’re going to do that.”

When asked if not addressing the situation and letting it fester is a concern, McDermott said, “Absolutely. Yeah. I mean all of it all.

Carolina extended the lead to 21-0 in the third quarter after Sam Darnold ran for a 1-yard touchdown. But a short while later, Darnold left on a cart to the locker room after Bills defensive tackle C.J. Brewer landed on his left ankle, causing it to bend awkwardly.

Rhule said Darnold has a sprained ankle, but doesn't believe there is a fracture. If it is a high ankle sprain it could keep him out four to six weeks, meaning P.J. Walker could enter the season as the team's backup quarterback.

The game was delayed 36 minutes because of lightning in the area.

Bills: DT Eli Ankou left the game with a hamstring injury in the first quarter. ... WR Tanner Gentry injured his knee/hamstring. ... CB Cam Lewis was taken to have X-rays on his nose.

Panthers: Like Darnold, kicker Zane Gonzalez was also carted to the locker room in the third quarter. Gonzalez injured his groin while practicing kicks on the sideline on a wet field. Gonzalez injured himself last December in a game at Buffalo when he suffered a leg injury during pregame warmups and did not play. ... DT Derrick Brown injured his oblique and did not return. ... FB Gio Ricci also left with a groin injury.