McManus grateful for AFC honor but isn't sure he deserves it 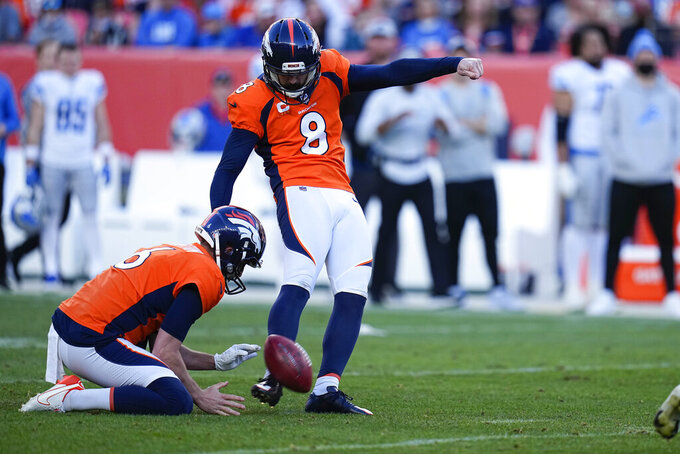 FILE - Denver Broncos kicker Brandon McManus (8) kicks a field goal against the Detroit Lions during an NFL football game on Dec. 12, 2021, in Denver. Not to seem ungrateful, but McManus isn't sure he deserves his AFC special teams player of the week award for kicking five extra points and a 52-yard field goal in the Denver Broncos' blowout of the Detroit Lions. “Obviously I appreciate the award and I was able to honor Demaryius wearing my cleats,” added McManus, who honored the memory of former teammate Demaryius Thomas, who death last week at age 33 rocked the NFL. (AP Photo/Jack Dempsey, File)

ENGLEWOOD, Colo. (AP) — Brandon McManus is thankful but doubts he deserves his AFC special teams player of the week award for making all five of his extra points and a 52-yard field goal in the Denver Broncos' blowout of the Detroit Lions.

“I think it's a skewed award at times," McManus said Wednesday after winning the award for the third tim e in his eight-year career. “I don't know if it's written in the rules that you have to win the game, but what I've noticed over these eight years is you do.

“Obviously I appreciate the award and I was able to honor Demaryius wearing my cleats,” added McManus, who arrived at the stadium Sunday wearing the No. 88 jersey of his friend and former teammate Demaryius Thomas, whose death last week at age 33 rocked the NFL world.

As McManus entered the stadium, he also had draped around his neck some custom cleats that depicted D.T.'s famous mile-wide smile and which he wore during the Broncos' 38-10 victory.

“So, it's special to me in that sense," McManus said. "But I think they could look at ways to possibly change that award because I'm sure there was a guy who kicked farther or (had) more kicks than I did.”

Two of them are in the AFC West with McManus.

Ka’imi Fairbairn kicked a 61-yard field goal in the Texans’ 33-13 loss to Seattle and Justin Tucker's three field goals included one from 50 yards and another from 55 yards in Baltimore’s 24-22 loss to Cleveland.

McManus, who also won the award twice last year, didn't need a waiver from the NFL's fashion police to wear his customized cleats honoring Thomas. League rules prohibit players at all other positions from wearing custom cleats outside of the two weekends the NFL allows players to spotlight their charitable causes.

“There's also a nice clause in the rule books and kickers can kind of wear whatever they want, kickers and punters,” McManus explained. “So, we can really wear any color. We don't have color schemes or anything like that."

The Broncos (7-6) are trying to reach the playoffs for the first time since winning Super Bowl 50.

McManus understands it's just business — good business, in all likelihood, as general manager George Paton was able to acquire two second-day draft picks for Miller, the franchise's career leader in sacks and wisecracks.

“Obviously, I miss my friend here. But I lost my teammate; I didn't lose my friend. And so I talk to him all the time still," McManus said.

McManus is among 10 Broncos who played with Thomas, whose family believes he died of a seizure Thursday at his home in Roswell, Georgia.

“It's so tragic. In my video, when I hear his voice and just remember all the conversations we had together, even at Peyton's enshrinement, having a chance to speak with him," McManus said. "And I saw how great he was with other peoples' kids and he hadn't had a chance to meet mine yet. So, that's what was most difficult.”

The Broncos paid tribute to Thomas last weekend with his No. 88 jersey draped on their bench, stenciled into their sideline and stickered onto their helmets.

They have another big game at home Sunday against the Cincinnati Bengals, who are also 7-6 and logjammed in the AFC playoff race.

McManus wants to help lead the Broncos back to the playoffs after this long drought in which they've had just one winning season in the past five.

“Oh, it would definitely mean a lot,” he said. “I'm tired of being in Cancun pretty early.”