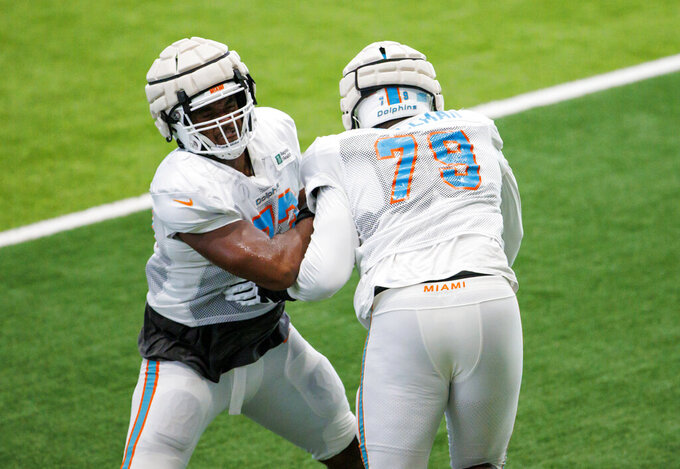 MIAMI GARDENS, Fla. (AP) — Miami coach Mike McDaniel thinks the Dolphins can make up for injuries to their starting tackles with their preparation and versatility.

“We have guys that can play all over the place on the line,” he said.

The Dolphins placed starting right tackle Austin Jackson on short-term injured reserve on Friday after he hurt his right ankle against the Patriots.

Jackson will miss at least four games, including Sunday’s matchup at Baltimore.

“It was kind of close,” McDaniel said. “Like I’ve articulated, ankles are kind of finicky. But really, what we wanted to avoid after we took all consideration into effect was that we don’t want it to linger for the whole season.”

Greg Little, who replaced Jackson in Sunday's season opener, is expected to start in his place. McDaniel said the team is confident in Little.

Left tackle Terron Armstead (toe) remained limited in Friday’s practice and is questionable for the game. McDaniel said his questionable status could go all the way to game time Sunday, depending on how Armstead feels.

“He’s got a high pain tolerance, especially in games,″ McDaniel said. “He’s one of those guys that does a great job in practice, but his spirit and energy is different in games because he loves playing games. And he’s played games with worse injuries, but what we don’t want to do is set stuff back further along in the season.”

Armstead was one of Miami's big free agent signings after he spent the past nine seasons with the New Orleans Saints. He immediately became a starter on an offensive line that struggled to protect quarterback Tua Tagovailoa last year.

Armstead, a three-time Pro Bowler, has dealt with various injuries throughout his career, including knee and elbow injuries last year.

“Injuries can take a toll because it’s taking you away from what you do for a living,” Armstead said. “Just mentally staying where you need to be — focused on the task at hand. Being down on yourself or being depressed or anything like that doesn’t heal an injury at all.”

“You just basically are moving through plan A, B, C, D, all the way up until ‘OK, we don’t have anyone left at the position,’” Smith said. “So I think this week, we’re operating under one context with a thought that the next couple contingencies or things we have talked about, we do have flexibility with.”

NOTES: TE Cethan Carter (concussion) did not practice this week and is out Sunday against the Ravens. ... DT Christian Wilkins (back), WR Cedrick Wilson (toe), TE Hunter Long (ankle) were limited Friday and are questionable.