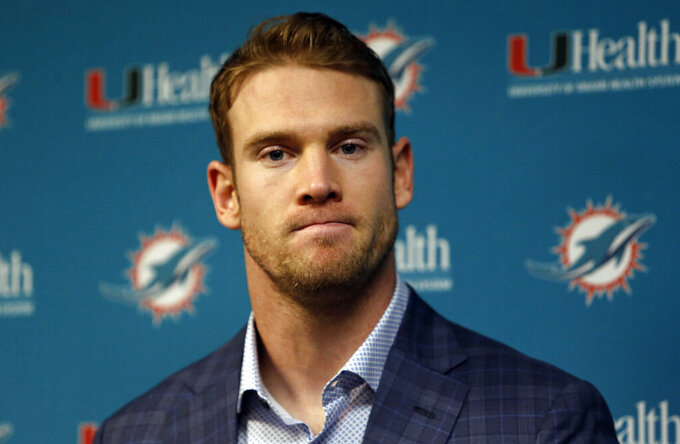 FILE - In this Dec. 30, 2018, file photo, Miami Dolphins quarterback Ryan Tannehill answers question during a news conference after an NFL football game against the Buffalo Bills, in Orchard Park, N.Y. Miami Dolphins quarterback Ryan Tannehill has been traded to the Tennessee Titans in a deal that also involves draft picks.Tannehill’s departure from Miami had been expected. He became the Dolphins’ starting quarterback as a rookie in 2012 and has still never taken a postseason snap. (AP Photo/Jeffrey T. Barnes, File)

Miami traded Tannehill on Friday to the Tennessee Titans in a deal that also involved draft picks. The Dolphins sent their sixth-round pick this year to the Titans for a fourth-round choice in 2020 and a seventh-round pick in April.

Tannehill's sports agency tweeted that as part of the trade, he signed a one-year deal with the Titans. He will replace Blaine Gabbert as the backup to Marcus Mariota. General manager Jon Robinson said Friday that Gabbert will be released.

Tannehill turns 31 in July, and his departure from Miami had been expected. He became the starting quarterback as a rookie in 2012 and has still never taken a postseason snap.

Tannehill tweeted: "To the @Titans fans, I couldn't be more excited to get to work! Always hear such great things about Nashville and cant wait to be a part of what the organization is building...let's go!!! #TitanUp"

The Dolphins are seeking their quarterback of the future under new coach Brian Flores. They have the 13th choice in the April draft, and might devote their first-round pick to a QB for only the second time since 1984.

As a stopgap, Miami is also in the market for a veteran. Free agent Teddy Bridgewater met Wednesday night with the Dolphins to discuss playing for his hometown team, but decided to remain Drew Brees' backup in New Orleans.

Gabbert, signed last offseason, went 2-1 as a starter with the Titans but couldn't win the one game they needed to reach the postseason in the regular-season finale.

Tannehill, 42-46 as a starter, missed all of 2017 with a knee injury, and sat out five games last year with an injury to his throwing shoulder.

He said at the end of 2018 he wanted to remain with the Dolphins. But owner Stephen Ross fired coach Adam Gase and ordered a roster overhaul while acknowledging it may take several seasons to build a winner.

Miami went 7-9 last year and ranked next to last in the NFL in yards, worst in franchise history.

Tennessee, meanwhile, adds an injury-prone quarterback to the one it has. Mariota, the second overall pick in the 2015 draft, never has played a full NFL season and is 27-28 as a starter.

The Titans this week also acquired free agent defensive end Cameron Wake, who made the Pro Bowl five times with Miami. Wake has 97 sacks and was a 2012 All-Pro, but figures to be more of a situational player in Nashville.