Minshew Mania was captivating, but Jaguars need to see Foles 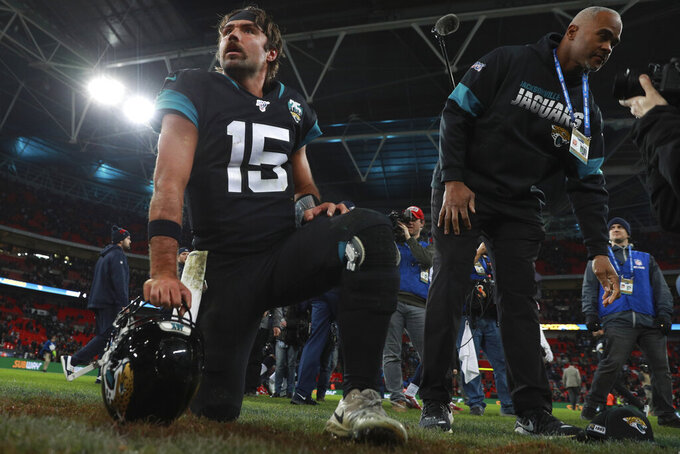 JACKSONVILLE, Fla. (AP) — Jacksonville Jaguars coach Doug Marrone is taking some time before deciding what to do at quarterback.

He shouldn't need long. His choice is a no-brainer.

Minshew Mania has been a captivating story , with quarterback Gardner Minshew going from sixth-round draft pick to rookie sensation. He gave the Jaguars (4-5) a chance in nearly every game and attracted fans near and far. His 1970s look — he rocks a groovy headband, an unkempt mustache, jean shorts and throwback T-shirts — is as much a part of his engaging persona as stories that range from pre-game stretching while wearing only a jock strap to trying to break his hand during college in hopes of earning an extra year of eligibility.

But the Jaguars need to see Nick Foles, the former Super Bowl MVP who signed a four-year, $88 million contract to leave Philadelphia in March.

It's not about the money, either. Minshew simply hasn't been good enough in three of Jacksonville's last four games, and his four wins came against teams with a combined 8-26 record.

He has 13 touchdown passes and four interceptions, earning the NFL's Rookie of the Week honors six times, but he also has fumbled 11 times and lost seven. Yes, Jacksonville's offensive line is shaky at best. And Minshew has little, if any, help at tight end.

But most everyone who watched Minshew against New Orleans, Cincinnati and Houston — the Texans facing him for the second time this season — could see the issues. He was jittery in the pocket and mostly inept in the red zone. In short, he looked like a rookie.

He led Jacksonville to a mere field goal in a 26-3 drubbing by Houston in London on Sunday. He threw for 309 yards, most of them in garbage time. The other numbers were more telling: 27 of 47. Two interceptions. Two lost fumbles. A number of off-target throws. Passer rating of 59.6.

"Nothing but confidence in him," defensive captain Calais Campbell said. "We're in a good situation. We have two really good quarterbacks. I like Nick's experience. I like his confidence, his preparation.

"At the end of the day, as a team, we go into this bye week, we regroup, we settle down and we come back with a vengeance to make a run with whoever it is out there."

Foles broke his left collarbone throwing a TD pass in the season opener and is eligible to return in time for next week's game at Indianapolis (5-3), a must-win situation for the Jaguars.

"Just that veteran savvy, Super Bowl MVP," cornerback A.J. Bouye said. "He knows the offense. It just depends on when he comes back, if he's healthy enough to come back. If not, we have to go back to Minshew. We know what he's capable of. We're not going to let (the Houston game) judge him. He's done a lot of great things for us."

Jacksonville's schedule is fairly favorable down the stretch, with games against Tennessee (4-5), Tampa Bay (2-6), the Los Angeles Chargers (4-5), Oakland (4-4) and Atlanta (1-7) sandwiched between two against the Colts.

The Jaguars are 31st in the league in red-zone efficiency, only better than winless Cincinnati. Jacksonville has scored 10 touchdowns in 29 drives inside the opponents' 20-yard line, a 34.48% clip that's a big reason for the team's offensive woes. The Jags have just three touchdowns in their past 13 red-zone trips.

Bouye shadowed Texans star DeAndre Hopkins on Sunday, holding him to eight receptions for 48 yards and a touchdown. Jalen Ramsey probably couldn't have done any better against one of the league's top receivers. It was Bouye's first chance to really showcase his coverage skills, and he shined.

Rookie tight end Josh Oliver has been a non-factor since returning from a hamstring injury that kept him out the first six games. He has two receptions for 10 yards, including one catch in each of the last two weeks. The lack of presence at the position has left Jacksonville with no one creating mismatches for linebackers and safeties.

5 — Number of losses in the past six trips to Indianapolis.

Rest up and announce Foles as the starter.

17 minutes ago
By Pat Graham 2 hrs ago
By Arnie Stapleton 6 hrs ago
By W.g. Ramirez 9 hrs ago
By Brett Martel 11 hrs ago