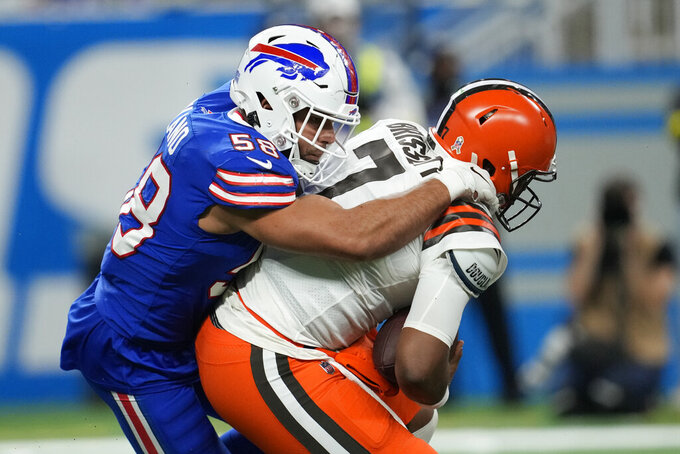 The Browns fell 31-23 to the Buffalo Bills at a neutral site game in Detroit, dropping them to 3-7 behind backup QB Jacoby Brissett.

Cleveland suffered miscues in all phases of the game. There were dropped touchdown passes by Pharaoh Brown and Harrison Bryant on back-to-back plays from the Buffalo 14. Brissett fumbled away the ball on the Buffalo 48 and was later stopped on a fourth and 1 from the Buffalo 27. Cade York had a 34-yard field goal try blocked.

“I feel like we left points on the board in the first half,” Browns coach Kevin Stefanski said. “We got first and goal from the 8 and came away with a field goal. We had a fumble, two quarterback sneaks that got stopped and we're not able to continue our drives. And that's really frustrating because we have to score more points to help this football team.”

The Browns were coming off a 22-point loss last week to the Miami Dolphins. Cleveland defensive end Myles Garrett, who earlier in the week called Sunday's contest a must-win game, said hope is not lost.

“We have to keep on pushing,” Garrett said. “There's still seven more games and things like this move our destiny out of our hands. But we just got to keep going forward and try and get into that win column.

“We can't expect the offense to put up 30 every game. We have be there and do our job.”

The Browns looked to be in control in the first half before the Bills took a 13-10 lead in the closing moments with Josh Allen's touchdown pass to Stefon Diggs, who was uncovered in the end zone.

Garrett said the Browns' troubles are rooted in not being focused during games.

“That's been our biggest weakness at this point, not having that attention to detail, not focusing and not finishing,” he said. “Those little things keep getting us. Those penalties. The special teams mistakes that we had. And just not being where we're supposed to be.”

Brissett, who completed 28 of 41 passes for 324 yards and three touchdowns, blew several chances to come away with a win.

“We shot ourselves in the foot, and that's obviously been the theme a couple of games,” Brissett said. "We just got to really hone in. It's getting to that point in the season where the margin is getting even slimmer.

Cleveland rallied within eight points, setting up an onside kick in the final seconds that Bills receiver Gabe Davis failed to grab and running back Taiwan Jones knocked out of bounds.

“We just didn't do enough as a team to beat a good team,” Stefanski said. “And that's the frustrating part, but they fought. Now we've got to finish."