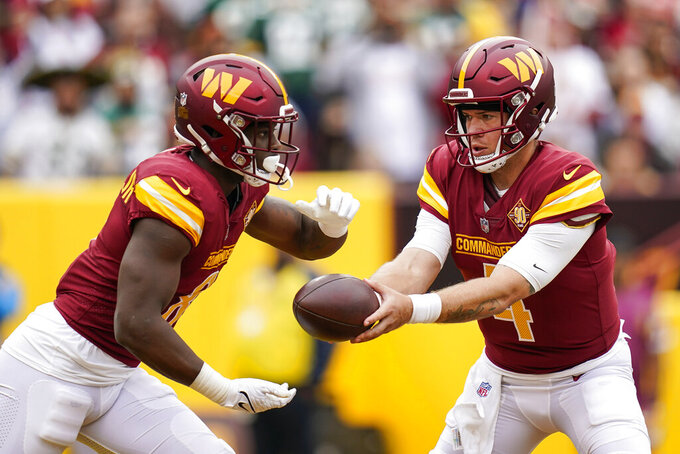 Washington Commanders quarterback Taylor Heinicke hands the ball off to running back Brian Robinson Jr., during the first half of an NFL football game against the Green Bay Packers, Sunday, Oct. 23, 2022, in Landover, Md. (AP Photo/Patrick Semansky)

On Sunday, he'll finally be a feature attraction on the NFL's big stage.

The 24-year-old quarterback, who spent more than 20 months as an understudy for the Indianapolis Colts, will make his first career start Sunday against the Washington Commanders. And like any young actor thrust into the spotlight, Ehlinger is eager, excited and, yes, even anxious.

“With every new opportunity there’s new nerves, so navigating through those, trying to stay in the moment is going to be the challenge,” he said. “I don’t think it’s weird. I think I always prepared in the way that I was ready for the moment and I’m really glad that I did because here we are.”

His rapid ascension up the depth chart, from No. 3 to Colts starter in less than two weeks, is only part of this week's surprising storyline.

This game had been billed as a matchup between Washington quarterback Carson Wentz and Colts quarterback Matt Ryan, who replaced Wentz in Indy this season. But Wentz went on injured reserve last week with a fractured ring finger and Ryan was benched Monday after separating his throwing shoulder.

Those moves opened the door for Ehlinger and Taylor Heinicke, who led Washington (3-4) to a surprise win over Green Bay last weekend, giving both a chance to prove they deserve the starting job.

“I’ve always been told I was too small, not strong enough arm,” he said. "So I have to find something within me to make the leap and the grit has been carrying me for a long time. It’s definitely a big part of my game.”

Indy (3-3-1) sees similar traits in Ehlinger. Coach Frank Reich says the 24-year-old former Texas star comes with a “special sauce" and likes the notion of Ehlinger using his legs to evade pass rushers and make plays outside the pocket. Plus, Reich has been impressed with Ehlinger's improved accuracy and increased arm strength after his offseason work with quarterback guru Tom House.

Colts fans saw what Ehlinger could do during the preseason. The bigger question, of course, is whether Ehlinger can replicate that success on Sunday.

“Well, a young quarterback that has an exciting style of play doing everything he can to move the ball, put points on the board,” Ehlinger said when asked what people should expect from him. “Being smart with the ball, getting it out on time, limiting mistakes and playing to our strengths.”

Last week, Colts owner Jim Irsay made his position about Washington owner Dan Snyder clear. He would rather not defend Snyder's actions and believes Snyder has done enough to warrant removing him as owner.

On Sunday, they could both be at Lucas Oil Stadium — though they may not be on speaking terms.

Irsay has been no stranger to controversy. The NFL imposed a six-game suspension and $500,000 fine in 2014 when he pleaded guilty to one misdemeanor count of operating a vehicle while intoxicated.

While Washington wide receiver Terry McLaurin is playing his first NFL game in Indianapolis, he is very familiar with Lucas Oil Stadium. McLaurin grew up in Indy, won high school football state titles on the field and won two Big Ten titles there as an Ohio State teammate of Colts receiver Parris Campbell.

“I would be lying if I say it’s not kind of cool to be able to go back to where I grew up, kind of where my affinity of football started,” he said. “I grew up a Colts fan, sitting in Section 540 with my dad.”

Colts running back Jonathan Taylor hasn't been the same since winning last year's NFL's rushing crown. Despite missing two games with a sprained ankle, he ranks 21st with 386 yards rushing.

But the other numbers aren't even close.

His 4.2 yards per carry average is down dramatically from 5.5 last season and 5.0 as a rookie. He has scored one TD, none since Week 1, after leading the NFL with 18 TD runs and matching Austin Ekeler of the Chargers for an NFL-high 20 total TDs in 2021.

“Everybody’s understanding their role. ... They’re doing their job. That’s the biggest thing. When you try to do too much, that’s when the big plays happen,” linebacker Cole Holcomb said. “So we were like: ‘Hey, let’s just simplify it down. Let’s get back to just doing our job, playing with good technique, tackling.’ And I think we keep improving every week.”