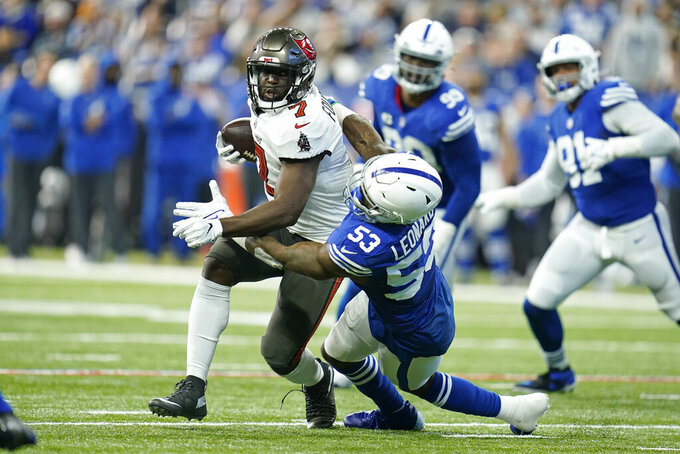 Seattle at Washington, 8:15 p.m. EST. The Seahawks (3-7) are off to their worst 10-game record under coach Pete Carroll. They are looking to avoid their first three-game losing streak with Russell Wilson as the starting quarterback. Washington has rejuvenated some postseason hopes by beating defending champion Tampa Bay and Carolina to improve to 4-6, but has not won a Monday night home game since 2012 when Robert Griffin III was the team’s quarterback.

— Aaron Rodgers, Packers, withstood pain from a toe injury, went 28 of 45 for 307 yards and threw two touchdown passes and also ran for a score in Green Bay's 36-28 victory over the Los Angeles Rams.

— Joe Burrow, Bengals, scrambled for a score and passed for another in Cincinnati's 41-10 win over Pittsburgh to give it a sweep of the season series for the first time since 2009.

— Leonard Fournette, Buccaneers, capped a four-touchdown game with a 28-yard scoring run with 20 seconds left to give Tampa Bay a 38-31 come-from-behind victory at Indianapolis. He carried 17 times for 100 yards and three scores and caught Tom Brady’s only TD pass of the game.

— Joe Mixon, Bengals, rushed for a career-high 165 yards and two touchdowns to help lead Cincinnati to a 41-10 victory over Pittsburgh.

— Cordarrelle Patterson, Falcons, ran for a career-high 108 yards and two touchdowns in his return from an ankle injury to help Atlanta past Jacksonville 21-14.

— Deebo Samuel and Elijah Mitchell, 49ers. Samuel ran for two touchdowns before leaving with an injury and Mitchell rushed for 133 yards and a score, leading San Francisco to a 34-26 victory over Minnesota.

— Myles Gaskin, Dolphins, had two short TD runs to help Miami to a 33-10 victory over Carolina.

— Dontrell Hilliard and D’Onta Foreman, Titans. They became the first Tennessee backs other than Derrick Henry to rush for 100 yards since 2018, with Hilliard carrying 12 times for a career-high 131 yards including a 68-yard TD in a 36-13 loss at New England. Foreman rushed 19 times for 109 yards. Both also had costly turnovers.

— Jaylen Waddle, Dolphins, had nine catches for a season-best 137 yards and a touchdown in Miami's 33-10 win over Carolina.

— Kendrick Bourne, Patriots, had both of New England's touchdown receptions, finishing with five catches for 61 yards in a 36-13 victory over Tennessee.

— Tee Higgins, Bengals, caught six passes for 114 yards and a touchdown in Cincinnati's 41-10 win over Pittsburgh.

— Adam Thielen, Vikings, had two touchdown catches in a losing cause as Minnesota fell 34-26 at San Francisco.

— Kene Nwangwu, Vikings, had a 99-yard kickoff return for a touchdown in Minnesota’s 34-26 loss at San Francisco. The running back had a 98-yard kickoff return TD in Week 9, becoming the first rookie to return two kickoffs for scores in a season since Cordarrelle Patterson in 2013.

— Justin Coleman and Duke Riley, Dolphins. Coleman grabbed Riley’s blocked punt and plowed in from 2 yards for a touchdown in Miami's 33-10 win over Carolina.

— Nick Folk, Patriots, kicked a 52-yard field goal in the fourth quarter of New England's 36-13 win over Tennessee to tie Stephen Gostkowski (2013) for the franchise record of five field goals from 50 or more yards in a single season.

— Dominique Dafney, Packers, forced a fumble on on a punt return that Krys Barnes recovered at the Rams 27 to set up a field goal in Green Bay's 38-26 victory over the Los Angeles Rams.

— Pat Surtain II, Broncos, had a pair of interceptions to lead Denver past the Los Angeles Chargers 28-13. The rookie cornerback returned the second INT 70 yards for a game-sealing touchdown.

— John Franklin-Myers, Jets, had two sacks and an interception in New York's 21-14 victory at Houston, becoming the franchise's first player to accomplish that feat since Lance Mehl in 1985.

— Mike Hilton, Bengals, returned a pass by Ben Roethlisberger 24 yards for a score late in the first half of Cincinnati's 41-10 rout of Pittsburgh.

— Jaelan Phillips, Dolphins, had three of Miami's five sacks in a 33-10 victory over Carolina.

— Shaquil Barrett, Buccaneers, had two sacks and forced and recovered a fumble on one of them in Tampa Bay's 38-31 win at Indianapolis.

— Rasul Douglas, Packers, returned an interception of Matthew Stafford 33 yards for a touchdown in Green Bay's 36-28 victory over the Los Angeles Rams.

Tampa Bay's Tom Brady has 30 touchdown passes this season, the ninth season he has at least that many. That ties him with Brett Favre and Peyton Manning for the second most in NFL history. Drew Brees holds the record with 10 seasons of 30 or more TD throws. ... Aaron Rodgers threw for 307 yards and two touchdowns in Green Bay's 36-28 win over the Los Angeles Rams, his 60th career game with at least 300 yards passing and two TD passes. He joined Brees (97 games), Brady (84) and Manning (70) as the only players with at least 60 such games. ... Keenan Allen had seven catches for 85 yards in a 28-13 loss at Denver, giving him 705 career receptions. He tied Antonio Brown as the fastest players to 700 career catches, both doing it in 111 games.

Jacksonville has dropped 45 of its past 52 games against teams from the NFC after losing to Atlanta. The Jaguars (2-9) are 0-4 this season versus the other conference. The latest defeat guaranteed the Jags another losing season, their 10th in the past 11 years. ... Miami beat Carolina 33-10 to become the sixth team in NFL history to immediately follow a 1-7 start with four consecutive wins. ... Indianapolis' Jonathan Taylor ran 16 times for 83 yards and caught four passes for 14 yards in the Colts' 38-31 loss to Tampa Bay — finishing 3 yards short of a NFL record-breaking ninth consecutive game with 100 or more yards from scrimmage and a rushing TD. ... Minnesota has allowed 66 points in the final two minutes of the first half, the most for any team through 11 games since at least 2000. ... The Vikings are also the 17th team in the Super Bowl era to take a lead of at least seven points in each of the first 11 games. The first 16 teams to do it combined for an .852 winning percentage, but the Vikings (5-6) are the only team to do it and have a losing record. ... With Baltimore's 16-10 victory over Cleveland on Sunday night, Ravens coach John Harbaugh improved to 18-2 in prime-time games at home and 23-4 overall against the Browns.

Cam Newton was pulled in the fourth quarter of Carolina's 33-10 loss at Miami after completing just 5 of 21 passes. Newton finished with 92 yards passing, no touchdowns and two interceptions. It all added up to a quarterback rating of 5.8, by far the worst of his career. He did have Carolina’s lone touchdown, a 1-yard spin in the first quarter, in the Panthers' seventh loss in their past nine games.

Heading into the Sunday night matchup between Cleveland and Baltimore, 25 games this season had been decided on the final play. That's the most through Week 12 in NFL history, including winning field goals for Chicago and Las Vegas as time expired on Thanksgiving. There have also been 40 games with a winning score in the final two minutes of regulation or in overtime, the third most through Week 12, with only 2003 (45) and 2015 (42) having more.

Denver rookie cornerback Pat Surtain II had two interceptions, including a 70-yard return for a TD, in the Broncos’ 28-13 win over the Los Angeles Chargers. He also returned an INT for a touchdown in Week 12, matching his father Patrick Surtain, who had two INT returns for scores in his 11-year NFL career. The Surtains are one of four known father-son combinations each with an interception return for a touchdown, along with Gil and Jairus Byrd, Dave and David Grayson, and Clay Matthews and Clay Matthews III.

New York Jets rookie quarterback Zach Wilson wasn’t satisfied with his game against the Houston Texans in his return from injury Sunday, a 21-14 win. Wilson threw for 145 yards and ran for a touchdown in his return from a sprained right knee, helping the Jets snap a three-game skid. The No. 2 overall pick in April, who missed the last four games, was rusty early and threw an interception, but put the Jets on top with a 4-yard scamper in the third quarter.

Cleveland entered its matchup with Baltimore with the NFL's top-ranked running game. But the Browns couldn't get going in a 16-10 loss. Nick Chubb managed only 16 yards on eight carries, and Kareem Hunt had 20 yards on seven attempts as Cleveland finished with just 40 total yards on the ground.

Minnesota Vikings running back Dalvin Cook was taken off the field on a cart with a shoulder injury in the third quarter of a 34-26 loss to the San Francisco 49ers. Cook went down after losing a fumble and stayed on the ground for a while before being taken to the locker room. Vikings linebacker Anthony Barr injured a hamstring. ... San Francisco wide receiver Deebo Samuel scored two touchdowns before leaving with a groin injury. The 49ers also lost running back Trey Sermon (ankle) and linebackers Fred Warner (hamstring). ... Green Bay lost wide receiver Randall Cobb to a groin injury during its 36-28 win against the Los Angeles Rams. ... Carolina running back Christian McCaffrey rolled an ankle in the first half of the Panthers' 33-10 loss at Miami.

“When you get a guy being honored like that, you don’t want to go out there and lay an egg.” — Giants coach Joe Judge, whose team beat Philadelphia 13-7 on the day New York retired the No. 92 jersey of Hall of Famer Michael Strahan. The defense intercepted Jalen Hurts three times, forced four turnovers overall and held the Eagles to a season low in points.