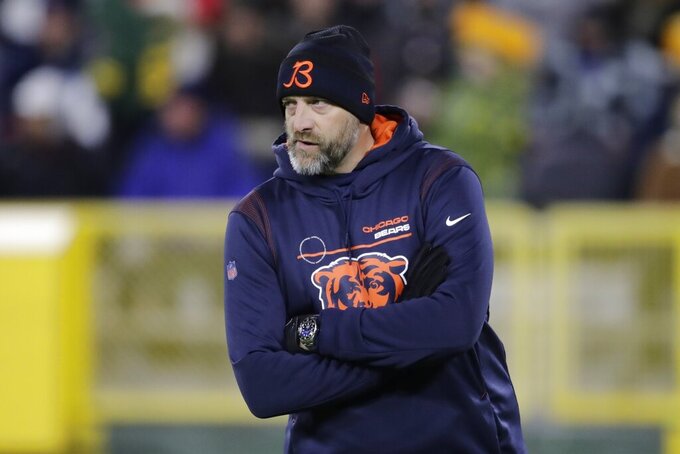 In moves reminiscent of the environment for the 2020 season, the NFL has updated its protocols and advocated for booster shots in reaction to an increase in COVID-19 cases around the league.

As part of its protocol changes, it is requiring masks regardless of vaccination status, and remote or outdoor meetings. It also is stopping in-person meals, adding restrictions on activities outside the facility, prohibiting outside visitors during team travel, and limiting the amount of people in team weight rooms.

“Finally, and based on expert advice, we will adjust the return-to-participation requirements for those who have recovered from COVID-19,” the league said in a statement. "All of these changes are grounded in our data and science-backed approach, with safety our No. 1 goal for the entire NFL community.”

The updated protocols will be enforced through Week 15 games, but are likely to continue or even be strengthened after that point.

Dr. Allen Sills, the league's chief medical officer, said the omicron variant of the coronavirus is “in many ways (like) addressing a new disease.” Omicron is responsible for the significant uptick in positive COVID-19 cases, according to Sills, which are emanating from within team facilities. That is the opposite of where previous positives had come from right after Thanksgiving.

The league and the players' union, advised by independent infectious disease officers, have developed a mechanism in the protocols that might lead to shorter stints on the sidelines for people testing positive.

Previously, a vaccinated person — players, coaches, executives and staffers — who tests positive must then have two negative tests 24 hours apart and be asymptomatic before being cleared to return. Beginning immediately, the new protocols relax that requirement a bit, allowing for two PCR tests or two Mesa tests — or one of each — being negative. The logistics for that could speed up the return of sidelined players.

“We have to think differently about this phase of the pandemic,” Sills said. “We are facing a different set of challenges and in some ways almost a different disease ... and it is going to require a different (strategy) from us.”

The 32 teams also were told Thursday that they may continue current media policies that include media wearing masks at all times in a club facility. But the teams can also shift to virtual interviews for the rest of this week, something a few of them already have done.

— The Los Angeles Rams put linebacker Von Miller and eight more players on the reserve/COVID-19 list Thursday, giving them a whopping 25 players on the list.

The Rams (9-4) have roughly 10 potential/probable starters on the list, along with several backups who would have seen action at defensive back in particular. They canceled practice for the second straight day Thursday and held virtual meetings.

A team spokesman said the Rams have been in contact with the league to gauge their options in case they don’t have enough players to field a full team Sunday at SoFi Stadium against the Seattle Seahawks.

— The Chicago Bears were missing all three of their coordinators because of COVID-19 protocols as they prepared for Monday night’s home game against the Minnesota Vikings. And they had seven players out because of illnesses.

COVID-19 has hit the Bears hard this week, one of many teams experiencing positive tests. Approximately 100 players across the 32 teams have tested positive.

Nagy missed a game earlier this year against San Francisco, a 33-22 loss, because of COVID-19 issues, and Tabor coached the Bears.

— Washington placed three more players on the COVID-19 list Thursday, following eight Wednesday. The team total is 21, including two players on injured reserve and two on the practice squad. Safety Sam Curl was the only starter added to the list, and was joined by centers Keith Ismael and Tyler Larsen.

Curl joins fellow defensive starters in lineman Jon Allen and cornerback Kendall Fuller on the list. Washington could be down to its fifth option at center because of coronavirus and injury problems.

— Seattle might be without one of its stars, receiver Tyler Lockett, who was put on the COVID-19 list Thursday along with running back Alex Collins. The Seahawks had no players test positive in the 2020 season, but have had three this year: Tight end Gerald Everett was the other in September.

Lockett had five catches for 142 yards and a touchdown last week against Houston and is 35 yards short of setting a career high for a season.

Collins has served as a starter for most of this season after Chris Carson was lost to a season-ending neck injury in Week 4. But Collins has played through several ailments.

— Cleveland might be down to third-string quarterback Nick Mullens after Case Keenum joined Baker Mayfield in the protocols, according to a person with knowledge of the situation who spoke anonymously because the move was not announced.

Tight end David Njoku was activated from the COVID-19 list, adding a playmaker heading into Saturday’s game against Las Vegas. On Wednesday, the virus shelved coach Kevin Stefanski and Mayfield, whose status for this week remains in question. The Browns previously had 17 players, including 10 starters, on the COVID-19 list and are placing safety Ronnie Harrison there. Starting safety James Johnson III and nickel back Troy Hill both tested positive on Wednesday and rookie cornerback Greg Newsome II has been ruled out with a concussion.

— Saints coach Sean Payton returned to practice on Thursday after staying home on Wednesday, when the team said the coach was “under the weather,” but had tested negative for COVID-19.

— Miami rookie receiver Jaylen Waddle's sensational season could be on hold. Waddle has been placed in the coronavirus protocol. The sixth overall draft pick already set a franchise record for receptions by a rookie with 86. He has 849 yards receiving and four touchdowns.

The Dolphins host the Jets on Sunday.