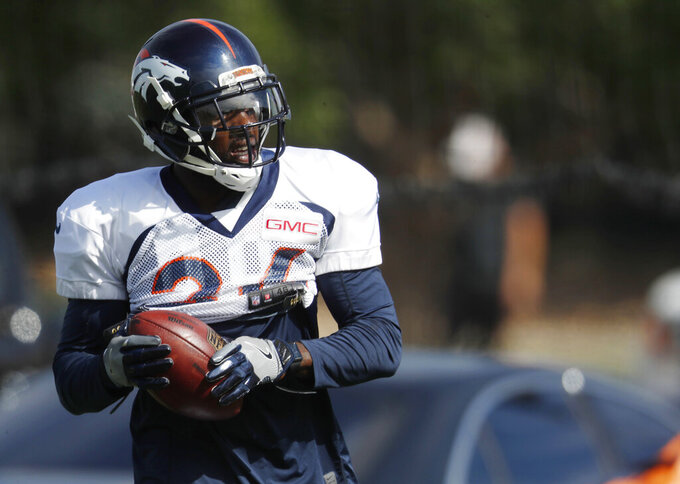 FILE - In this July 30, 2017, file photo, Denver Broncos free safety Darian Stewart takes part in drills at NFL football training camp in Englewood, Colo. The former safety announced his retirement from the NFL on Thursday, Dec. 10 2020, saying he's turned his focus to his foundation in Charlotte, North Carolina, and wants to give back to his alma mater, the University of South Carolina. (AP Photo/David Zalubowski, File)

DENVER (AP) — Darian Stewart’s farewell to football came complete with one last gathering of the “ No Fly Zone ” members reminiscing, rejoicing and, of course, razzing one another.

The 32-year-old former safety announced his retirement from the NFL on Thursday, saying he has turned his focus to his foundation in Charlotte, North Carolina, and wants to give back to his alma mater, the University of South Carolina.

“Today I’m officially announcing my retirement. And I’m happy, I’m ready. This was the perfect time with COVID going on and I’m ready for the next journey,” Stewart said on a Zoom call with members of the media and some of his former Denver Broncos teammates.

Stewart's decade in the NFL included stops in St. Louis, Baltimore and Tampa but it was in Denver where he made his mark.

He was signed by the Rams as an undrafted free agent in 2010 and after four seasons he joined the Ravens in 2014.

When Gary Kubiak left his job as Baltimore's offensive coordinator to take over the head coaching job in Denver in 2015, he brought along Stewart, whose hard-hitting style quickly rounded out one of the best secondaries in NFL history, one that included cornerbacks Chris Harris Jr., Aqib Talib and Bradley Roby and fellow thumper safety T.J. Ward.

“It was everything, man,” Stewart said. “Before I signed there, I knew what that group was doing and when I had an opportunity to be a part of it, I didn’t flinch ... and that was one of the best decisions that I could have made.”

Stewart intercepted Tom Brady's pass in the AFC championship that year and, in the Broncos’ 24-10 win over Carolina in the Super Bowl, he forced a fumble, sacked Cam Newton once, hit him two other times and broke up two of his throws.

“It was just a swag, a confidence that we had going in,” Stewart said. “It was all year long. You couldn’t deny what we were doing. We were making plays week in, week out throughout the season, in close games. So, going into that week, we knew that Carolina, that they hadn’t played a defense like us.”

Stewart was asked on the Zoom how he ever got a word in edgewise in Denver with the likes of the loquacious Talib, Ward and Harris around?

“I didn’t get much in,” Stewart said, chuckling. “Those boys, it was a joke session every day. And that was one of the bright moments of my career, just coming in there, everybody got it. Nobody was exempt from getting joked on. So, that was fun to see and what fun to be around.”

Talib, Ward and Roby all joined the videoconference to offer props and praise, and Talib, who retired in September and now hosts a podcast in Dallas, had a question for Stewart.

“Congrats my boy, definitely one of my all-time favorite teammates, man, the way you played the games now, I really admired that,” Talib said.

Talib then asked what made Stewart play like he did.

“I always wanted them to feel me, anytime I came into a tackle,” Stewart said. “So, I always tried to go for the big hit. You don’t always get that, but for me, it was just not to even think twice."

Ward was up next and he didn't really have a question, just some praise and a little hint about his own future.

“Stew, congratulations, brother,” Ward said. “You know I love you like no other, man. Congratulations on your retirement, man. The best safety I ever played with. ... Hey, I’m so happy for you, bro. Respect always and love, bro. You know you’re my dawg, A1.”

“Yes sir, that’s what up. Love you, too, bro," Ward said. "Congratulations, and I’m probably not far behind you with my announcement.”

Stewart told him to “take some time,” then thanked everyone for their well wishes. As he was signing off, Roby darted in to tell him he, too, had mad love and respect for him.

“I got much respect for you,” Stewart replied. “I love you.”

And thus ended the final gathering of the “No Fly Zone.”