‘Nobody cares anymore:’ Lions-Redskins could be peak apathy 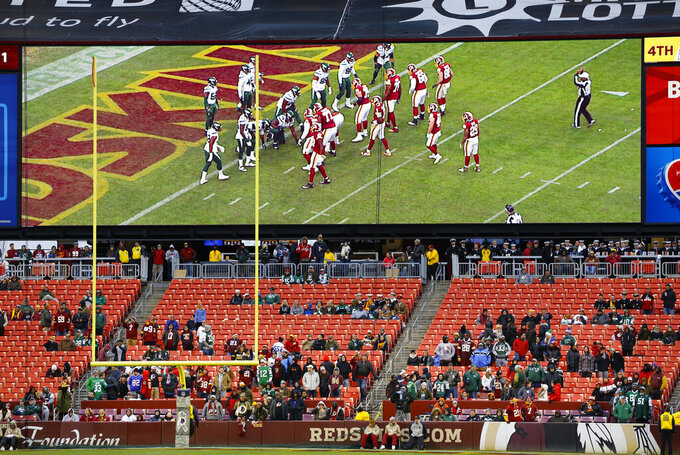 FILE - In this Nov. 17, 2019, file photo, some fans watch during the second half of an NFL football game between the Washington Redskins and the New York Jets, in Landover, Md. There were more than 20,000 empty seats for the Redskins’ last home game, and when many of them have been filled this season, it’s with fans of the visiting team. It could be even emptier Sunday when the 1-9 Redskins host the 3-6-1 Detroit Lions. (AP Photo/Patrick Semansky, File)

LANDOVER, Md. (AP) — Tom Brady thought it was ridiculous how many opposing fans there were at the Washington Redskins’ home stadium. Sam Darnold said his road game at Washington almost felt like a home game.

The Redskins haven’t had much of a home-field advantage this season, with an infusion of visiting fans and tens of thousands of empty seats each week. At 1-9 and with the 3-6-1 Detroit Lions coming to town, their game Sunday could mark the peak of Redskins fan apathy and set another low in a lost season that’s playing out in embarrassing fashion at FedEx Field.

“I'm guaranteeing that it'll be 25% Redskins fans Sunday, 25% Lions fans Sundays and 50% empty seats,” said Kevin Stroop, who has been a Redskins season-ticket holder since 2005. “It'll be a lightly attending friends and family affair, I think.”

Washington has lost nine consecutive home games, and the combination of on-field failures and a subpar game day experience has sunken attendance for a once-proud franchise with three long-ago Super Bowl titles.

After the team conceded the end of a “sellout streak” in 2018, the average announced attendance in five home games so far this season is 67,364 in a stadium that seats just under 82,000.

Cornerback Josh Norman early this season said of “fair weather” fans, “When things turn around, don't come back on the ship.” Upon firing coach Jay Gruden after an 0-5 start, team president Bruce Allen was asked about the hordes of New England Patriots fans invading and responded: “I'm sure many of our fans put their tickets on the second (sic) market and made some money on it selling it to people from the Northeast. All we can do is try to improve our product.”

That product hasn’t improved. Washington is 1-4 under interim coach Bill Callahan, and even excitement about rookie quarterback Dwayne Haskins and some young offensive playmakers is muted by two decades of struggles since Dan Snyder bought the team and almost all bad years since Allen started running it.

“You go to the stadium and the chants are either for the other team or 'Sell the team,’” said Eileen Williams, a five-year season-ticket holder. “Nobody cares anymore.”

Williams and Stroop are planning to attend the Lions-Redskins game Sunday, but each is on the fence about renewing for another season. Williams doesn’t want to waste the money she has poured into tickets and parking, while Stroop promised his family they’d all go to this game after selling his two seats to the home opener against the Dallas Cowboys in September.

“It's kind of the culmination of things,” Stroop said of growing fan unrest. “Quite frankly, you saw the same thing with the Baltimore Orioles in the last 10 years, 15 years. Every year, you see a few more (empty seats), a few more, a few more and then what happens is you go to a game like I went to last year the last game of the year with the Philadelphia Eagles in town and it was 85% Eagles fans, and it was like, 'Who wants to be part of that?'”

Stroop, 41 of Crofton, Maryland, knows now he could’ve waited and bought the same club-level seats for half of what he paid, and that’s not an exaggeration. StubHub and VividSeats have tickets available for around $10, with fees included, to witness what still qualifies as an NFL game.

Williams has been to four of five Redskins home games so far this season but said she was disappointed when she realized they were back again Sunday. Her old tailgating crew of 12 has shrunk to three with so many canceling their season tickets, and the game day experience is to blame if the 37-year-old from Ashburn, Virginia, gives them up before 2020.

“It's one thing if you have a fun experience,” Williams said. “But from getting your ticket scanned to parking to getting into the stadium to trying to get a beer — I have a friend that two games ago tried to get chicken tenders for her kid and it was over half an hour — that whole part, if that was the way it used to be four or five years ago, that would make it all a little bit better.”

It’s not any easier inside the Redskins locker room as players endure the pain of a season that has gone off the rails.

“It’s tough,” veteran running back Chris Thompson said. “Guys have been doing the best that they possibly can in this situation. We've been just having our talks internally about everything that's going on. Obviously we are not of proud of what we've done out there.”

The Lions have lost three consecutive games for the third time in Matt Patricia’s 26-game career as an NFL head coach. They are mired in the worst seven-game stretch of Patricia’s tenure with only one win — a 31-26 victory over the New York Giants — during the slump that followed a 2-0-1 start.

“Certainly, always looking for better ways to coach,” Patricia said. “That has to be my job, and that’s what I’m always trying to figure out every single week.”

QB Matthew Stafford will miss his third consecutive game with a back injury, which means another start for backup Jeff Driskel.

Washington safety Montae Nicholson is expected to play his second game since an incident involving a 21-year-old woman dying of a drug overdose after he and a friend dropped her off at the hospital. Nicholson played in a 34-17 loss to the New York Jets last week, has continued to practice and refused interview requests.

“My understanding is that Montae is cooperating with the local authorities,” Callahan said Wednesday. “Right now, he is on the active roster and is scheduled to play.”

Detroit ranks 30th in the NFL in defense, giving up 412.8 yards per game, and against the pass and on third down. The Lions give up 27-plus points per game, ranking 27th, and are 28th in the red zone defensively and 24th against the run.

“Numbers don’t lie,” Detroit cornerback Justin Coleman said. “But the numbers don’t tell the full story of what this team is capable of defensively.”