Owner of WNBA's Aces connects franchise's past to present 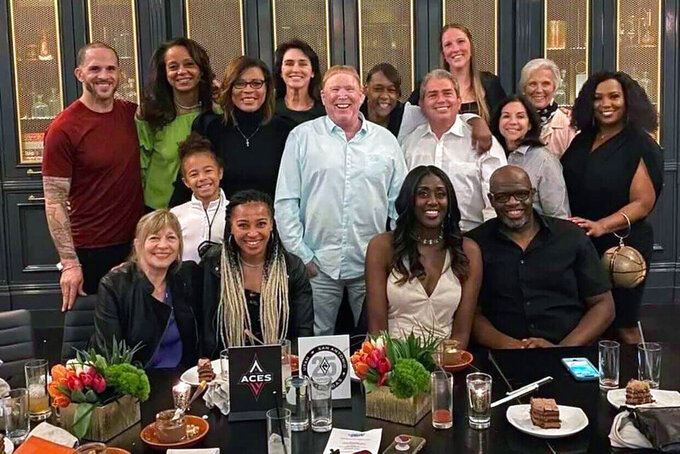 LAS VEGAS (AP) — Mark Davis has already left his imprint on the Las Vegas Aces franchise in his first year as the team's owner, connecting its past to the present.

He saw firsthand how much his father, Al Davis, cared for former Raiders players, starting the first alumni program in the NFL, which has grown over the years.

Mark Davis wanted to bring a similar program to the Aces and has been inviting back alums of the franchise dating to its time in Utah and San Antonio.

“I wanted to take that alumni initiative that the Raiders had built that I feel so strong about and bring that to the Aces as well,” Davis said in an interview at the Raiders facility. “This season would be the 25th anniversary of the WNBA and the Aces' franchise. They were an original WNBA franchise starting in Utah as the Starzz and going to San Antonio before moving to Las Vegas as the Aces. It was my intention to go back the 25 years and let those women know we remember them.”

Nikki Fargas, the new Aces president, was tasked with making this initiative work. She had seen it with the Raiders — her husband, Justin Fargas, played for them.

One of those former players was Sylvia Crawley Spann, who played one season in San Antonio in 2003. She received a text from Fargas in May inviting her and a guest to Las Vegas for the weekend to celebrate her season with the franchise.

At first, Crawley Spann thought the invitation was a joke since she had spent only a season with the franchise. Soon she realized it wasn't. She went to Nevada for the weekend with her fiance at the time. The two had been talking about eloping in Las Vegas. They married the day after they arrived.

“I think Mark is setting a precedent. He gets it. How to run an organization and how to value your employees and past employees,” Crawley Spann said. “He wasn’t the owner of my specific team, but he considers us a part of the lineage.”

Crawley Spann said that Fargas basically put together the wedding in a matter of hours. The other former players on the trip served as members of the wedding party and the dinner with Davis turned into a wedding reception.

“Our wedding gift from the Aces is that our anniversary will forever be in Vegas on Memorial Day weekend,” Crawley Spann said. “We have an open invitation to always come back there. I can’t say enough about my experience a moment I’ll never ever, ever forget.”

“Mark has set the standard for what a WNBA team should look like,” she said. “Players, regardless of their salary, want to feel connected, want to feel important and part of something that's bigger than themselves. He's done that already in his first year.”

So far roughly 40 alums have come to Las Vegas for a weekend. They go out to dinner so he can get to know them and “let them know we appreciate and understand the sacrifices they made to help build this league.”

COVID-19 protocols have prevented the former players from spending much time with the current team. But Fargas and Davis suspect that will change once the pandemic is behind.

“We see this growing into something much bigger,” Fargas said.

Davis envisions a bright future for the Aces on and off the court. He's planning to build a state of the art training facility across the street from where the Raiders train.

He points to vacant land beyond a window.

“We're going to give them a home,” he said. “That meant practice facilities, offices, training room, locker room, everything that would make them a world class organization.”

“When I meet the alumni and talk about the Aces' building, the women are so excited about both,” Davis said. “It will be something special here.”