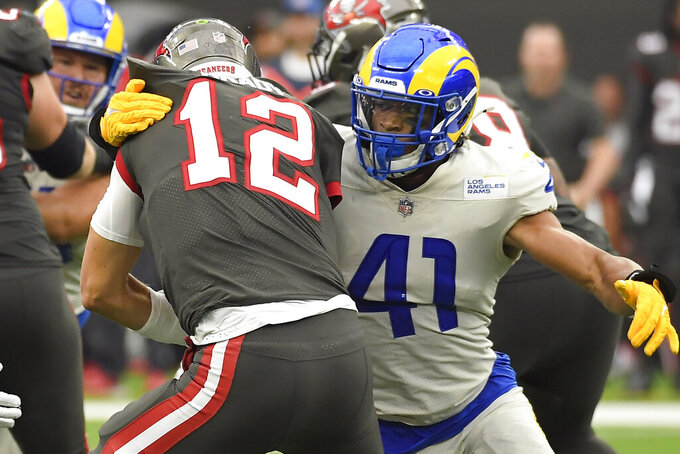 The Packers' new inside linebacker had nine tackles, broke up a pass and snared another that day, helping Green Bay edge the Bengals.

“We just said, ‘How in the hell was this guy on the street?’” Rodgers recounted. “It’s a great pickup by our personnel folks. He can run, he’s a great tackler, he’s around the ball all the time, he’s a great locker room guy. I mean, it’s baffling to me.”

When Packers GM Brian Gutekunst signed the sixth-year pro to a one-year, $2 million contract in June, it appeared a minor move even though Campbell had 70 starts in four solid but unspectacular seasons with the Falcons and one with the Cardinals.

Instead, he has become a key reason for Green Bay's 7-2 start, one of the league's best bargains and, at age 28, the top defensive breakout in 2021.

Campbell has a team-high 82 tackles, two interceptions, two forced fumbles, one fumble recovery and one sack. He has played at a Pro Bowl level and given the Packers the dynamic inside linebacker they’ve lacked in recent seasons, while helping the defense withstand injuries to pass rusher Za’Darius Smith and cornerback Jaire Alexander.

“That’s a guy we’re really lucky to have," Rodgers said.

And really, most anyone could have had him.

“I definitely had other offers but I wanted to be a part of a winning organization and be able to showcase what I can do," Campbell said recently. “I always knew what I was capable of, but I just wanted to come to where I had a great opportunity to win.”

The icing for Campbell was reuniting with Packers coach Matt LaFleur, who was in his final years as the Falcons quarterbacks coach in Campbell's rookie season in Atlanta in 2016.

Campbell, who started in Super Bowl 51 against New England and had four tackles, earned his first NFC defensive player of the month honor in October when he had 45 tackles, forced two fumbles, broke up two passes, intercepted one and had a sack.

He had seven tackles in Green Bay's 13-7 loss at Kansas City on Sunday, when the Packers' patchwork defense held Patrick Mahomes to 166 yards through the air and the Chiefs to 234 yards, the lowest output in Mahomes' career.

Maybe it shouldn't surprise anyone that Campbell is breaking out at the rather ripe football age of 28. He didn't play football until his sophomore year of high school and his lone scholarship offer came from Hutchinson Community College in Kansas, where he was teammates with Cordarrelle Patterson. He transferred to Minnesota after one season and the Falcons selected him in the fourth round of the 2016 draft.

Several other players have emerged as defensive playmakers during the first half of the 2021 season. Among them:

The Cowboys' 2020 second-round draft choice out of Alabama had a decent rookie season with three interceptions and 58 tackles in a dozen games. This season, he had interceptions in each of Dallas' first six games, including a pair against Carolina. He had two pick-6s and his 12 pass breakups are two shy of his rookie total.

Young is the OTHER linebacker involved in a Rams-Broncos trade at midseason. A week before the Broncos sent Von Miller to the Rams for a pair of high draft picks, Denver acquired Young from the Rams, where the fourth-year pro ranked second with 46 tackles, including a team-leading six for loss in his breakthrough fourth NFL season. He has had seven more in Denver.

The Titans' 2018 second-round draft choice has nine sacks in nine games, matching his career high set in a full season in 2019. He's a big reason Tennessee (7-2) has the AFC's top record and he had a big game in the Titans' 28-16 win over the Rams on Sunday night, when he shared a sack and hit Matthew Stafford on three other occasions.

The eighth overall pick in the 2020 draft, the former Clemson star had a decent rookie season, but only started seven times. His 59 tackles in nine games this year already top the 54 he had as a rookie, and he's a key part of the Cardinals' 8-1 start, the best in the NFL. He has forced three fumbles, picked off a pass and broken up four other throws.

Simmons is coming off the best game of his career, a monster prime-time performance against the Rams when he had 10 QB pressures, six tackles and three sacks. He's the first Titans player with a three-sack game since Dec. 21, 2008. And he now has a career-best 5½ sacks after getting five combined through his first two seasons after going 19th in the 2019 draft.