Panthers use sign at practice to cut down on mental mistakes 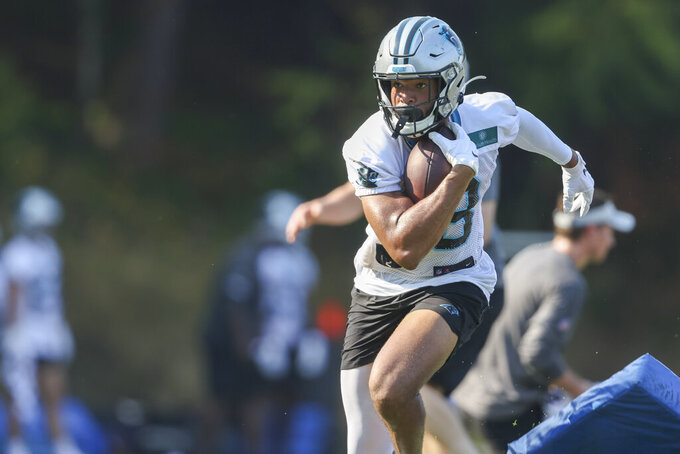 SPARTANBURG, S.C. (AP) — When Will Grier fumbled an exchange from center Matt Paradis in practice Wednesday, the Carolina Panthers backup quarterback knew what was coming next.

A few moments later, Grier and Paradis found themselves running toward the sideline to tap a large sign that reads “DBO” — which stands for “don’t beat ourselves.”

Panthers coach Matt Rhule had the sign hung from a temporary tent near the main practice field at Wofford College this week to remind players the importance of avoiding mental mistakes.

But Panthers assistant quarterbacks coach Matt Lombardi came up with the idea of running to touch a sign, something he picked up while working as an offensive quality assistant under Miami Dolphins head coach Brian Flores a few years ago.

In his first season in Miami, Flores had players sprint across the field into the corner to slap a wall that read “TNT” or “takes no talent,” to acknowledge they had made a mental mistake in practice.

Carolina players seem to be taking to the idea.

“I love emphasizing that we don’t beat ourselves,” Grier said. “It’s a good way to reemphasize it. We can talk about it meetings, we can say it out here, but when you got to go run and touch that sign and you’re thinking about it the whole time you’re running. So, I like it.”

The Panthers were tied for the 12th-most penalties (95) in the league last season, costing them 752 yards. There were also plenty of other mental mistakes that led to the team finishing 5-11 under Rhule in 2020.

“If you ever want to see anything change, you have to be held accountable when you make mistakes," said second-year defensive tackle Derrick Brown.

Rhule said the point of the exercise isn't to punish players by running.

“When you have to run, you're missing an opportunity to be on the field,” Rhule said. "When you talk to players, especially guys trying to make the team, they’re always like, ‘I just want an opportunity coach. Just give me some reps.' Well, if you get a rep and you jump offsides, you’re gonna lose those reps and someone else gets those reps.”

KIRKWOOD BACK ON SIDELINE

Wide receiver Keith Kirkwood, who was taken the hospital on a stretcher after taking a hit to the neck area during practice Tuesday, was back watching practice Wednesday from the sideline.

Kirkwood was unable to comment because he's in the league's concussion protocol.

The Panthers offense bounced back from a horrendous day on Tuesday with a strong showing in the red zone. Carolina seemed to score at will through the air and on the ground on plays inside the 10-yard line.

“Yesterday was not good at all,” Rhule said. “They were much better today. First day in the red zone and I though we functioned well early and kept it going late.”

One of the beneficiaries was new tight end Dan Arnold, whom Rhule expects will figure big into the team's red zone plans.

The Panthers have been without two key defensive players this week in practice — linebacker Shaq Thompson and cornerback A.J. Bouye — due to injuries.