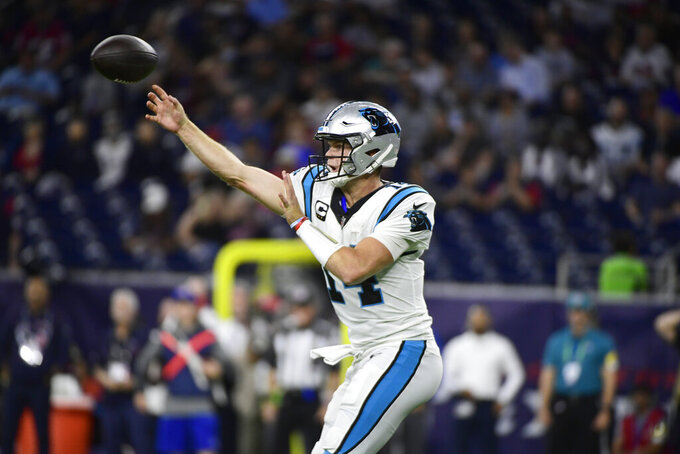 Carolina Panthers quarterback Sam Darnold throws a pass against the Houston Texans during the first half of an NFL football game Thursday, Sept. 23, 2021, in Houston. (AP Photo/Justin Rex)

OPENING LINE: Cowboys by 5, according to FanDuel SportsBook.

TURNOVER DIFFERENTIAL: Panthers plus-1; Cowboys plus-5.

PANTHERS PLAYER TO WATCH: QB Sam Darnold has been solid, completing 68% of his passes for 888 yards with six total touchdowns (three rushing, three passing) and one interception. But things might get a little tougher against Dallas without RB Christian McCaffrey (hamstring) in the backfield, making Carolina more one-dimensional on offense.

COWBOYS PLAYER TO WATCH: RB Ezekiel Elliott is coming off his best game of the season (95 yards, two touchdowns) as the Cowboys have had a dramatic shift in production in two games since the opener. Dallas had 391 yards passing and 60 rushing in a loss to Tampa Bay. In victories over Philadelphia and the Los Angeles Chargers, the Cowboys averaged 221 yards passing and 179 on the ground.

KEY MATCHUP: Panthers pass rush vs. Cowboys RT Terence Steele. OLB Haason Reddick has 4½ of Carolina's league-leading 14 sacks, and the Panthers have at least four in each of the three games. DE Brian Burns has six sacks in his last five games. Steele is an undrafted second-year player starting for the suspended La'el Collins. Steele played all 16 games last year with Collins out because of hip surgery, and is getting solid reviews this year.

KEY INJURIES: Panthers CB Jaycee Horn (foot) and S Juston Burris (groin) got hurt along with McCaffrey against the Texans and won’t play. DE Yetur Gross-Matos (ankle) is also expected to be out. ... Carolina is hoping newly acquired CB C.J. Henderson will be ready, but he’s dealing with a groin injury and missed the Jaguars’ Week 3 game against Arizona. ... Dallas expects to be without S Donovan Wilson (groin) for a third consecutive game. It's likely to be the second game in a row without DE Dorance Armstrong (ankle) and DT Carlos Watkins (knee). ... This will be the third game on injured reserve for WR Michael Gallup (calf).

SERIES NOTES: Carolina's second consecutive trip to Texas after beating Houston is a return to AT&T Stadium for the first time since 2015, when the Panthers enjoyed a 33-14 Thanksgiving rout of the Cowboys on the way to a 14-0 start. Carolina lost to Denver in the Super Bowl that season. The Panthers have won the past two meetings after a five-game Dallas winning streak that followed the second of two playoff victories for Carolina against the Cowboys.

STATS AND STUFF: Rookie Chuba Hubbard will start in place of McCaffrey, but Royce Freeman will also see action. Hubbard ran for 52 yards on 11 carries after McCaffrey's injury late in the first quarter in Houston. Freeman had five carries for 17 yards. ... The Panthers have outscored opponents 40-6 in the opening half and outgained them 734 to 255. ... WR DJ Moore led the Panthers with eight catches for 126 yards last week. ... Rookie Tommy Tremble will take over as Carolina’s primary tight end after Dan Arnold went to Jacksonville in the Henderson trade. ... Carolina’s defense leads the NFL in all three yardage categories (overall, rush, pass) and is second in points allowed. ... Cowboys QB Dak Prescott has completed an NFL-best 77.5% of his passes with six touchdowns and two interceptions in his return from the ankle injury that sidelined him after Week 5 last year. ... RB Tony Pollard has consecutive games of at least 60 yards rushing for the first time in his three-year career. ... WR Amari Cooper has six catches for 50 yards in two games since catching 13 passes (a career high) for 139 yards in the opener. ... CB Trevon Diggs in the only player in the NFL with at least one interception in each of the first three games. He and Cincinnati's Logan Wilson entered the week as the only players with three picks. ... The Cowboys lead the NFL with eight takeaways and are tied for first with New Orleans at plus-5 in turnover differential. ... The Cowboys have lost eight of their past nine games the week after playing on Monday night. ... There have been 13 instances of teams getting at least 13 first downs in the first quarter since the 1970 merger. The Cowboys have two of them in the past two weeks (13 against the Chargers, 14 against the Eagles).

FANTASY TIP: The Dallas defense qualifies for the hot-hand theory. The Cowboys have at least two takeaways in seven consecutive games going back to last season. That's the longest active streak in the NFL.