Pickett orders Steelers to 'study more' after loss to Eagles 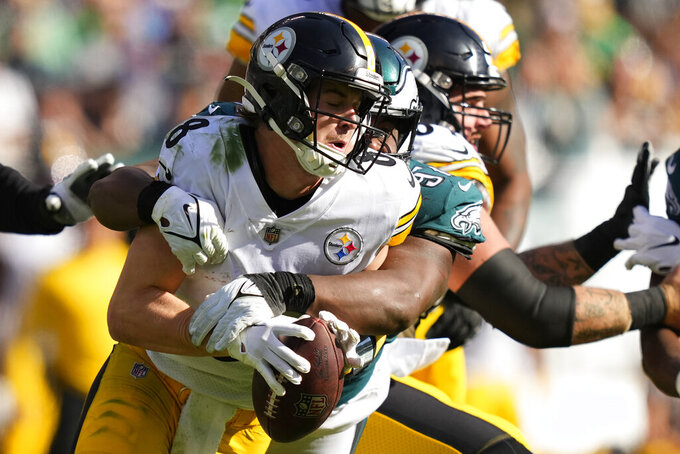 PHILADELPHIA (AP) — Eagles coach Nick Sirianni knows Steelers fans often take over an opposing stadium and offer a slice of Pittsburgh with thousands of waves of their Terrible Towels.

Sirianni scanned the Linc and spotted few of the ubiquitous rally towels. He gave credit to Eagles fans who had pretty much locked out their intrastate rivals from snapping up tickets.

About the only thing terrible in Philly was, well, the Steelers.

Kenny Pickett had passes picked off, got sacked, failed to throw a touchdown pass and struggled all game. The end result Sunday was the Eagles beat the Steelers 35-13 to remain undefeated.

A rookie quarterback, Pickett put the Steelers (2-6) on notice: Time to hit the playbook.

“Guys need to know what they’re doing,” Pickett said. “We need to study more. I don’t think we study enough as a group. There’s way too many penalties, which we can control. It’s all mental. There’s really no excuse for that to happen.”

Pickett once famously backed out of his commitment to play at Temple and decided to play his collegiate career across the state at Pitt. That meant he missed out on playing at the Linc, the shared home of the Eagles (7-0) and Owls.

No doubt, Pickett wished he could have missed this one, too.

Pickett has started four straight games after replacing Mitch Trubisky at halftime of the Steelers’ 24-20 loss to the Jets on Oct. 2. The No. 20 overall pick, Pickett has shown promise at times, but has experienced growing pains. Ball security has been an issue.

Pickett was strip-sacked late in the game by Jason Hargrove, leading to a Philadelphia touchdown.

In this case, it wasn't touchdowns: Pickett finished 25 of 38 for 191 yards with one interception.

“We all weren’t good enough today. I’ll just assess it in that way,” coach Mike Tomlin said. “He’s a young guy getting an opportunity to play and all that. I’m just not in that frame of mind right now. I’m going to assess what transpired from a collective perspective.”

Wide receiver Chase Claypool threw a 1-yard pass to fullback Derek Watt on a trick play in the first quarter for Pittsburgh’s only touchdown.

Everything else went wrong for the Steelers: No receiver topped 57 yards, no running back had more than 50 yards and the Steelers were whistled for nine penalties for 60 yards.

“A guy dropping a ball or missing a block or I miss a throw, the physical things, you can pat each other on the back and say we’ll go get them next time,” Pickett said. “You can put up with that. But the stuff you can’t put up with is the mental mistakes and that needs to get fixed.”

The Steelers entered the game 31st in points, 30th in total offense and near the bottom of the league in yards per pass attempt and yards per rushing attempt. Pittsburgh remains without a 20-yard rush and has just one completion over 40 yards this season.

Offensive coordinator Matt Canada remains on the hot seat after another dismal outing. Tomlin declined to discuss any potential changes to the coaching staff as the Steelers head into a bye week.

“We’re 2-6, guys. I’m not going to answer that question every week,” Tomlin said. “I’m open to doing whatever is required for us to get better. That’s just how it is. We’re seriously committed to winning and being better and that’s just a component of it.”

Even worse, A.J. Brown taunted defenders Minkah Fitzpatrick and Ahkello Witherspoon after they failed to break up the wide receiver’s third touchdown pass of the first half. Witherspoon, his first game back since a Week 3 hamstring injury, was benched in the second half for James Pierre.

“We’re not positioning ourselves to win games. We didn’t today,” Tomlin said. “We’ve got to own that. Some fundamental things, we’re falling short.”