Pitt's Twyman: opting out was right call to prep for draft 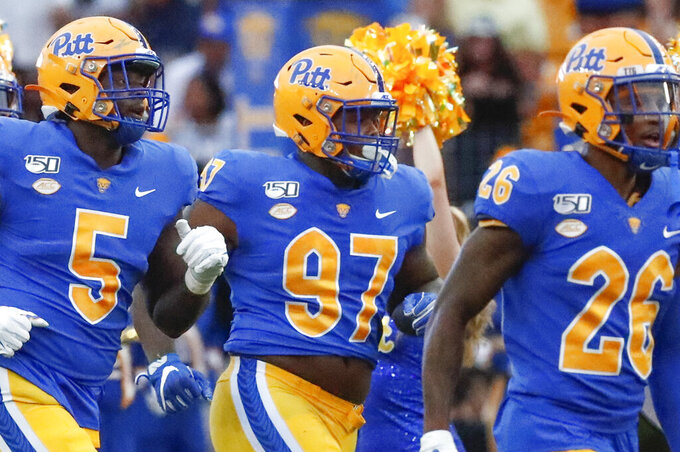 FILE - This Aug. 31, 2019, file photo shows Pittsburgh defensive lineman Jaylen Twyman (97) as he takes the field with his team to play an NCAA football game against Virginia in Pittsburgh. Twyman cried while watching Pitt football go on without him after the defensive lineman opted out of the 2020 season. It was a decision Twyman felt necessary -- both financially and emotionally -- to prepare him for the 2021 NFL draft. (AP Photo/Keith Srakocic, File)

PITTSBURGH (AP) — Jaylen Twyman couldn't stop the tears. They fell repeatedly last September as the former Pittsburgh defensive lineman watched the Panthers go on without him after he opted out of the 2020 season to prepare for this spring's NFL draft.

“I was definitely missing them a lot,” Twyman said Wednesday after participating in Pitt's Pro Day.

Just don't confuse missing his teammates with regretting his decision.

“I was just trying to help my mom and my little brothers financially,” said Twyman, who signed with an agent last August and has spent most of the last seven months training in Florida, far away from his home in Washington. "So whatever happens in April, happens. My team showed great gratitude towards me. They thought I wasn’t selfish at all. So it’s in God’s hands now.”

And the 6-foot-1, 301-pound Twyman's sizable hands, too. Hands he used to do 40 reps at 225 pounds — five more than idol turned mentor Aaron Donald did for the scouts before 2014 draft — then flexed immediately afterward to remind those in attendance he did it cold.

“I just wanted to show that all the work that I’ve been putting in and the pain that I have built up, you know,” said Twyman, an All-Atlantic Coast Conference selection in 2019. "But I was just trying to put my best foot forward. When I got up on the bench I was just reminding everybody that I didn’t warm up. I just got up there and did little arm circles and got up under there. I didn’t touch no pre-weight or nothing.”

It was the highlight of an uneven overall performance. Twyman arrived 10 pounds heavier than he was listed during his breakout redshirt sophomore season, when he racked up 10 1/2 sacks after being thrust into the starting lineup following an injury to Keyshon Camp during summer drills. His 40-yard-dash times (5.51 and 5.39) were sluggish at best, though his 32.5-inch vertical leap hinted at the athleticism that made him an electric presence in 2019.

Were there times last fall when Twyman wondered what it would be like to be in the huddle alongside defensive ends Patrick Jones and Rashad Weaver, both of whose names are likely to be called early in the draft? Of course.

“Sacks would have just been falling in my lap so I wouldn’t had to have worked as hard as I did last year for sure,” Twyman said.

Opting out, however, left Twyman as a bit of a mystery. His 2019 evoked the echoes of Donald, who was one of the most dominant defensive players in the nation during his award-laden run at Pitt from 2011-13. Yet Donald's run came over multiple seasons. Twyman's goal is to prove what he did as a sophomore wasn't a one-off.

His Florida sabbatical has included copious amounts of time with pros he called “one-percenters” and he's developed a strong bond with Donald, one of three men in NFL history to win the league's Defensive Player of the Year award three times.

“Ever since I’ve been watching him since I was 14 I’ve been trying to mimic everything he do, which way he ties his shoe and everything,” Twyman said. "It’s definitely paid off.”

Twyman remains an intriguing target. He estimated he has talked to two dozen NFL teams and believes he can play both inside and outside along the defensive line, though he’s almost certainly projected as a tackle.

Twyman points to stints training under former NFL defensive end turned “sack whisperer” Chuck Smith, and longtime defensive lineman guru Pete Jenkins as proof of his growth. Yes, it was tough not playing last fall as the Panthers went 6-5 without him. He's still confident the move was the prudent one.

Long hours watching Donald, Hall of Famer John Randle and longtime defensive end Geno Atkins among others have prepared him for what lies ahead.

“All of those dudes are my height and most of them wear 97,” said Twyman, who donned the number at Pitt. "I studied those dudes a whole lot and tried to mimic their game as a whole.”