With playoffs ahead, Bengals QB Burrow sitting out finale 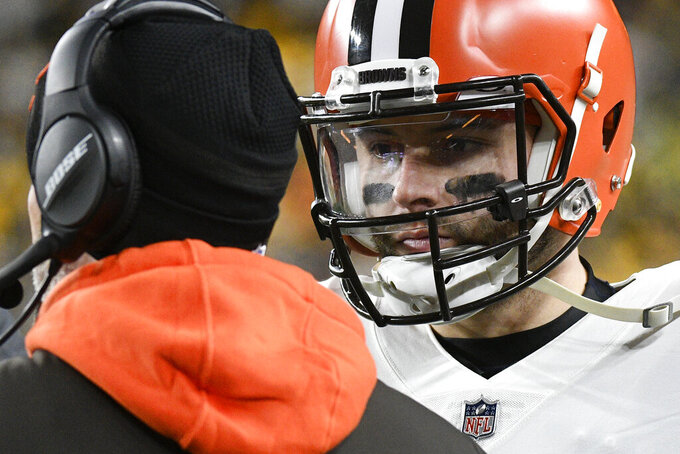 Cleveland Browns quarterback Baker Mayfield, right, talks with head coach Kevin Stefanski on the sideline in the first half of an NFL football game against the Pittsburgh Steelers, Monday, Jan. 3, 2022, in Pittsburgh. (AP Photo/Don Wright)

CLEVELAND (AP) — Joe Burrow's sitting out this one to rest for the playoffs. Baker Mayfield's skipping the season finale as well — for a very different reason.

To think what it might have been: Burrow and the brash, baby Bengals vs. Mayfield, Myles Garrett and the Browns for an AFC North title.

Instead, it's Brandon Allen vs. Case Keenum in a Cincinnati-Cleveland matchup that quickly went from bonkers to blasé.

The battle of Ohio's backups, and a snapshot of where the two organizations stand.

With Burrow nursing a sore right knee and the playoffs looming, Cincinnati is resting its young star quarterback on Sunday against the Browns, who are still trying to figure out what happened to a season long gone sour.

Just a week ago, it appeared the matchup would have playoff implications for both teams. But when the Bengals (10-6) stunned the Kansas City Chiefs to clinch the AFC North, they essentially eliminated the Browns (7-9), who were already going to need outside help after dropping three of four.

Burrow insists he's healthy enough to play, and would have if necessary, but the Bengals have loftier goals in mind that earning a season split with the Browns, who drilled them 41-16 on Nov. 7.

Cincinnati isn't taking any chances and will bubble wrap Burrow.

“Rest this week and get my body back to where it needs to be so I can get back to full strength running around the way I need to be Week 1 of the playoffs,” said Burrow, who finished his second regular season with 4,611 yards, 34 touchdowns and completed a league-best 70.4% of his passes.

“It’s a regular-season divisional game. You got a chance to go 5-1 in the division. We played good football on the road this year," he said. "We also lost to this team earlier in the year, and we haven’t forgotten about that. And so we want to finish the regular season on a good note.”

Mayfield won't get that chance.

Battered and beaten down, Cleveland's QB won't play the final home game as he prepares to have surgery on his injured left shoulder Jan. 19.

Mayfield has played with a torn labrum since getting hurt in Week 2, and he and the Browns decided it's best for him to shut it down after he was sacked nine times in Monday night's loss at Pittsburgh.

It's a disappointing end to a dreadful season the Browns and Mayfield, and it's possible his run in Cleveland could be over.

He's signed through 2022, but Mayfield's inconsistency coupled with the team's reluctance to sign him to a long-term extension points to the Browns at least exploring other quarterback options in the offseason.

“I feel for him,” said offensive coordinator Alex Van Pelt. “I really do appreciate his effort this season. The guy was definitely in pain a lot of the time. I've been around some tough guys, but he's up at the top of the list with the stuff he endured and went through this year.”

"I know he wanted to be there for his teammates, but at some point, you have to make the decision that in this situation his health is most concerning to keep him healthy and get him right for the offseason for next year.”

With Mayfield out, backup Case Keenum will make his second start. The 33-year-old led the Browns to a win over Denver in October while filling in for Mayfield. And although this matchup with Cincinnati has the look and feel of a summer exhibition, Keenum insists players are motivated to finish strong.

“‘What is there to play for?’ that’s not even in our vocabulary," he said. “I don’t understand what that even means. There’s a lot of pride in Cleveland. We have a lot of things to play for.”

After dodging COVID-19 issues most of the season, the Bengals were hit hard this week with a rash of positive tests. The good news is that the NFL's new protocols may prevent players form from missing the playoffs.

All could return after five days if they are asymptomatic.

The Bengals' rise to the top of their division is nothing new.

The Bengals will also finish with their first winning season since 2015, when they finished 12-4 and won the division, only to lose a bizarre wild-card game to Pittsburgh.

Taylor went 6-25-1 in his first two seasons in Cincinnati.