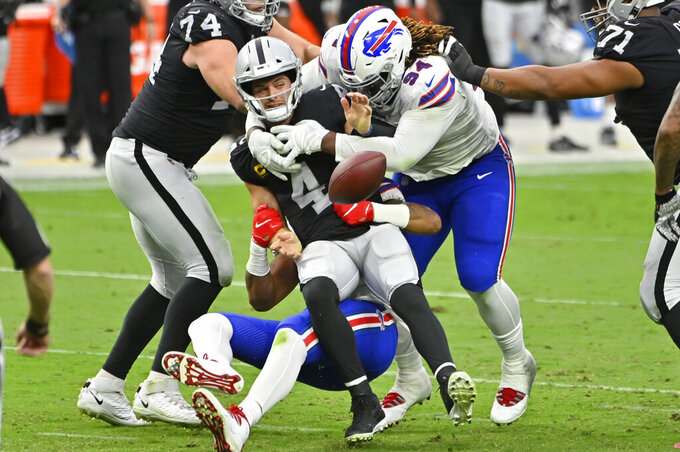 Derek Carr was not in a celebratory mood after setting the Raiders franchise record with his 151st career TD pass.

A leaky defense and mistake-prone offense sent Las Vegas to a second straight loss in what has been an all-too-familiar pattern since Carr entered the league in 2014.

The 30-23 loss to the Buffalo Bills on Sunday marked the 57th time the Raiders lost in Carr’s 98 career starts, setting a record for most losses by a quarterback in his first seven NFL seasons. That prompted Carr to state “enough is enough” and “I’m sick of losing.”

“I like his competitive spirit,” coach Jon Gruden said Monday. “I like what he stands for and I like the way he’s playing. I’ll just leave it at that.”

Gruden liked that emotion even if he didn’t like everything he saw on the field from the Raiders (2-2). The defense blew coverages on Buffalo’s first two touchdowns and created no turnovers.

Offseason additions of players like Cory Littleton, Maliek Collins, Nick Kwiatkoski and Carl Nassib have done little to solve the defensive woes for the Raiders, who have allowed the second most points per drive and yards per play in the league since coordinator Paul Guenther arrived with Gruden in 2018.

“I know he’s a good coach,” Gruden said. “I know the mistakes are correctable and we’ll correct them.”

The offense lost two more fumbles with Carr and tight end Darren Waller each losing the ball and also lined up in an illegal formation that negated a long TD pass.

After scoring 34 points in winning each of their first two games, the Raiders have been held to 43 points the past two weeks even with late TDs in each game that had little impact on the outcome.

The investment the Raiders made in their defense hasn’t led to better results. Las Vegas has four sacks and three takeaways all season and went five straight quarters against the Patriots and Bills without a defensive stop. Excluding kneel-down drives, the Raiders allowed points on nine straight possessions over the two games before finally forcing a punt in the third quarter on Sunday.

Daniel Carlson. He has made three 54-yard field goals already this season after missing his only two attempts from outside 50 yards in 2019. The last time a Raiders kicker made more than three field goals in a season from at least 50 yards came in 2015 when Sebastian Janikowski had four.

Josh Jacobs. After an impressive rookie season, Jacobs has had trouble getting going this year behind a banged-up offensive line. His 3.61 yards per carry are 41st out of 45 qualified runners after having 15 carries for 48 yards on Sunday. He also got stuffed on a fourth-and-1. Jacobs has been tackled for a loss on a league-worst 12 carries this season out of 83 attempts (14.5%). He was tackled for loss on just 16 of 242 carries (6.6%) last season.

RB Jalen Richard hurt his ankle in the game and will be reevaluated this week. ... DT Maliek Collins (shoulder) left the game and his status is unknown this week.

27 — Carr has lost three fumbles the past two weeks in what has been a recurring problem for much of his career. His 27 lost fumbles since entering the league in 2014 are the most in the NFL. His four lost fumbles this season are tied for his second most, trailing only the seven in 2018. That loose ball security takes away from his 311 straight passes without an interception.

The Raiders visit the Kansas City Chiefs. The Raiders have lost their last five in the rivalry and haven’t won at Arrowhead Stadium since 2012.