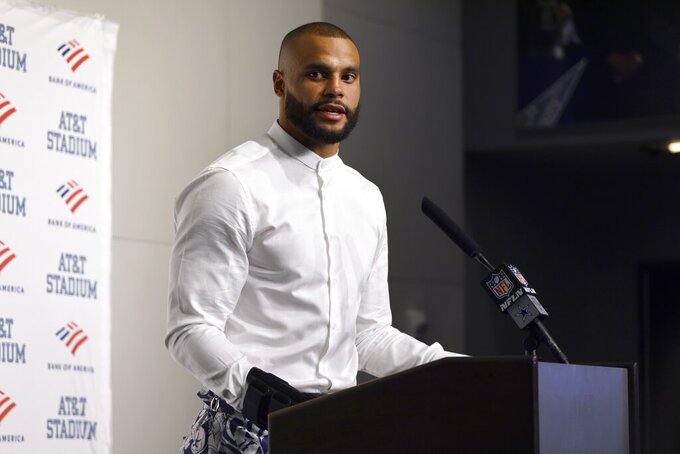 He'll have to win more than that for Dallas to stay in contention this season.

Prescott is out multiple weeks after sustaining a fracture near his right thumb in the fourth quarter of a 19-3 loss to Tampa Bay in the opener. Rush's first start this season will be Sunday against defending AFC champion Cincinnati.

“Going back to the end of his rookie year, Coop has always been a guy that I turn to, whether it be this game or whether it's just for help,” Prescott said. “Now, I’ll be able to help him in these next several weeks, to hopefully get the best out of him and the best out of this team.”

Rush made his only career start last season with Prescott sidelined by a calf strain and threw the go-ahead touchdown pass to Amari Cooper in the final minute of a 20-16 victory at Minnesota, giving Dallas a sixth consecutive victory.

That winning streak came after a loss to the Buccaneers in the opener. The odds against it happening again are extreme. Instead the talk will be about the Cowboys' season being over almost before it started. Rush will believe otherwise.

“We’ll draw on that experience from last year big time,” Rush said. "You know, get my feet wet last year and getting out there tonight. We’ll regroup as a team and a group on offense.”

Even before Prescott's injury, the Cowboys were anemic on offense. The offseason trade of Cooper to Cleveland in a cost-cutting move didn't look good with new No. 1 receiver CeeDee Lamb catching just two passes on a game-high 11 targets.

The Cowboys scored their only points on the first possession, then didn't cross midfield again until the final minute of the third quarter. An offense that led the NFL last season in points per game at 31.2 and yards at 407 had three and 244.

“Let’s not hit the panic as if we just can’t do anything on offense,” said Prescott, who was set for surgery Monday. “Our coaching staff will find the best position and best spot to put Cooper Rush in every game.”

It was puzzling that Ezekiel Elliott didn't get more carries since he averaged 5.2 yards on 10 rushes. The running game appeared much more effective than in the 31-29 loss at Tampa Bay in the opener last season. The Cowboys just haven't shown they can stick with it with Kellen Moore calling plays.

The Cowboys were bullied at the line of scrimmage in the run game. Leonard Fournette averaged 6 yards per carry in his best game in two-plus seasons with the Bucs (127 yards). Tampa Bay had 152 yards total, 40 more than Dallas allowed on average last season while finishing in the middle of the pack in run defense. The Cowboys will be at or near the bottom against the run if those numbers don't improve.

Micah Parsons is getting a lot of attention from offensive lines and is still getting to the quarterback. The reigning NFL Defensive Rookie of the Year sacked Tom Brady twice. He was the only reason the game was close at halftime (12-3) because both sacks forced field goals, one of which the Bucs missed.

The offensive line is showing the frayed edges brought by injuries and personnel decisions. The Cowboys allowed four sacks and committed five penalties. Undrafted third-year right tackle Terence Steele had four of them, with three false starts and a holding call. Steele was the replacement for La'el Collins, released in a cost-cutting move.

First-round pick Tyler Smith was the first rookie to start at left tackle in franchise history with eight-time Pro Bowler Tyron Smith out until at least December with a torn hamstring.

Connor McGovern, who took over at left guard for Connor Williams after Williams went to Miami in free agency, sprained his right ankle on the first series and could miss a couple of games. Matt Farniok, a second-year player drafted in the seventh round, replaced McGovern.

S Jayron Kearse has a knee injury that could sideline him for a few games. He was already battling a neck issue that cropped up during the week.

0-3 — Mike McCarthy's record in openers as Dallas coach. The only predecessor to lose his first three openers was Dave Campo from 200-02. Campo didn't get a fourth one. If the Cowboys can't find a way to win with Rush, McCarthy might not get a fourth one either.

The Cowboys have seven more games before their open week, and there's a good chance they'll have to play all of them without Prescott. It's reasonable for Dallas to hope for a 4-4 record going into the break, but it's asking a lot. The Cowboys lost all seven games Tony Romo missed after breaking his collarbone in Week 2 of 2015. They lost the first four games after Prescott's season-ending ankle injury in 2020.