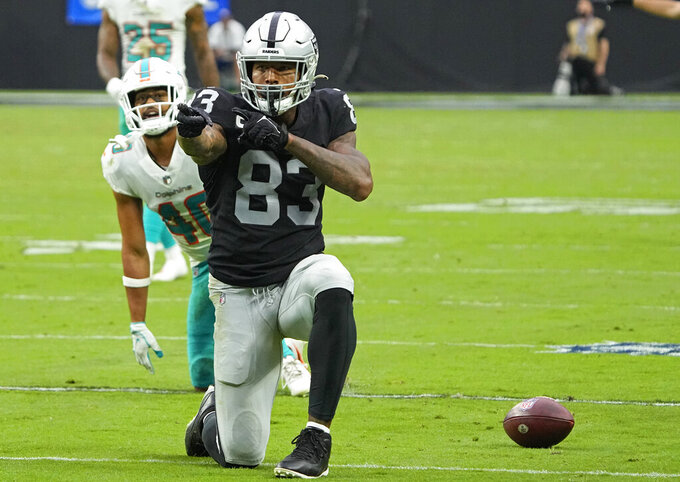 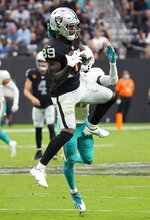 No team has faced an early season gauntlet quite like the one Las Vegas has gone up against and come out unscathed like the Raiders did.

The Raiders pulled out another late-game thriller, edging the Miami Dolphins 31-28 in overtime on Sunday to improve to 3-0 for the first time since 2002.

The victory over the Dolphins followed an overtime win in the opener against Baltimore and a victory at Pittsburgh as the Raiders were the 38th team to open the season with three straight games against teams coming off seasons with at least 10 wins and the only one to win all of them.

Things don't look to get much easier this week with the Raiders (3-0) traveling to take on the Chargers (2-1) on Monday night after Los Angeles won at Kansas City this past week.

“It's fun to win,” coach Jon Gruden said Monday. “Also you have to be realistic when you look at the schedule. It doesn't get much easier. ... Every week is a grind.”

That's why Gruden knows his team will need to be much better going forward than in the first three weeks when the Raiders have had to overcome 14-point deficits twice.

Las Vegas scored 25 straight points to climb out of that hole against the Dolphins only to allow Miami to score twice late to send the game to OT.

The Dolphins then extended the game in overtime by converting a fourth-and-20 to drive to a field goal that matched the Raiders three points on the opening possession before Derek Carr drove Las Vegas down the field again for the winning score.

“We need to put a complete performance together,” Gruden said. “That's what we need to do. We've had spurts where it's been pretty doggone good and there's been spurts where it needs to be better.”

Starts. The Raiders once again failed to score on the opening drive, going three-and-out against Miami. That extended their drought to nine straight games, their longest since a 13-gamer in 2012-13. Las Vegas has five three-and-outs, two other punts, an interception and a turnover on downs during this stretch.

Peyton Barber. The Raiders gave Kenyan Drake a lucrative contract this offseason to complement Josh Jacobs. But with Jacobs out with an ankle injury it's been late-summer pickup Barber handling the bulk of the work. Barber had 23 carries for 111 yards and a TD to go along with three catches for 33. The 144 yards from scrimmage are the most for a Raiders running back since Jacobs had 144 against the Bears on Oct. 6, 2019.

“When you need him, he doesn’t say anything, he doesn’t even smile,” Gruden said. “I don’t know how he’s feeling, I hardly know this guy, but I gave him a big hug and a game ball.”

C Andre James. The Raiders let Rodney Hudson leave in the offseason because they believed that James could take over that role. He has struggled early this season and had a few more bad snaps on Sunday and was beaten badly on a fourth-and-1 stop in the first quarter.

Gruden says he's hopeful that Jacobs can return to practice this week after missing the past two games.

200. The Raiders are the first team ever to have four players record at least 200 yards receiving in the first three games of a season. Henry Ruggs III leads the way with 237, followed by Darren Waller with 224, Edwards with 210 and Hunter Renfrow with 204.

With a win Monday against the Chargers, the Raiders will have their seventh 4-0 start ever. They made the playoffs the previous six times with five trips to the conference title game, one Super Bowl championship season in 1983 and a runner-up finish when they last did it in 2002.