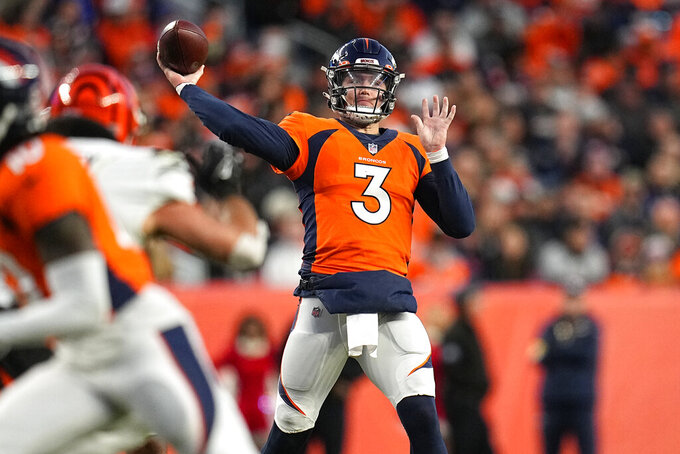 Denver Broncos quarterback Drew Lock (3) throws against the Cincinnati Bengals during the second half of an NFL football game, Sunday, Dec. 19, 2021, in Denver. (AP Photo/Jack Dempsey)

BETTING LINE: Raiders by 1 1/2, according to FanDuel SportsBook.

BRONCOS PLAYER TO WATCH: ILB Baron Browning, a third-round pick out of Ohio State, got off to a slow start with knee and head injuries. But he’s been a rapid riser since cracking the lineup at midseason. After playing in just two of the Broncos’ first six games and making a single tackle, Browning has flashed star potential with 43 tackles, including a career-best 10 last week against the Bengals.

RAIDERS PLAYER TO WATCH: WR Zay Jones had two key catches on Las Vegas' winning drive last week when he finished with season highs of six catches for 67 yards. But Derek Carr has also thrown four INTs on passes to Jones this season, his most of any target.

KEY MATCHUP: Broncos RT Bobby Massie vs. Raiders DE Maxx Crosby. Crosby has been one of the most effective edge rushers when it comes to getting pressure with a league-high 82 pressures according to Pro Football Focus. But Crosby doesn't have any sacks since he had three in Week 6 against the Broncos when he beat Massie on two of them.

KEY INJURIES: Broncos QB Teddy Bridgewater is out with a concussion and Drew Lock will make his first start of the season. ... Denver DE Dre'Mont Jones (foot) missed last week's game and LB Kenny Young is in concussion protocol. Their status is unknown for this week. ... The Raiders lost SS Johnathan Abram to a shoulder injury last week. ... Las Vegas also could once again be without TE Darren Waller (knee, back) and LB Denzel Perryman (ankle). ... Raiders CBs Nate Hobbs and Brandon Facyson went on the COVID-19 list this week.

SERIES NOTES: The Raiders have won three straight and five of six in the series. ... The Raiders have won four straight vs. the Broncos just once since leaving Los Angeles following the 1994 season, from 2009-11. ... Carr threw for 341 yards and two TDs in the first meeting. ... The Broncos have turned over the ball nine times in the last three meetings against the Raiders, including four INTs by Lock last season in Las Vegas. Lock threw for a career-high 339 yards and two TDs with no interceptions the last time he started in Week 17 last season.

STATS AND STUFF: Lock has made three relief appearances in place of Bridgewater, completing 55% of his passes with one TD, two interceptions and two fumbles, one of which he lost. ... Lock led the league last year with 15 interceptions and 18 turnovers altogether. ... RB Melvin Gordon is one of two running backs (Ezekiel Elliott) with 900-plus scrimmage yards in each of the last six seasons and he’s the sixth player in history with seven or more touchdown runs in six consecutive seasons. ... RB Javonte Williams ranks second in the NFL among rookie running backs with 1,103 scrimmage yards. That includes 815 rushing yards. ... WR Tim Patrick caught his team-leading fifth TD pass last week. ... WR Courtland Sutton had eight catches for 94 yards and a TD in the teams’ Week 6 meeting. After catching five passes for 68 yards the next week, he’s gone seven consecutive games with either one or two catches with zero touchdowns and a top output of just 29 yards. In those games, he’s averaged 1.71 catches for 18.7 yards. ... TE Noah Fant leads the team with 58 catches but his 9.2 yards per catch are a career low. He had nine catches for 97 yards against the Raiders earlier this season. ... Broncos S Justin Simmons had a career-high two sacks last week. He and J.C. Jackson are the only NFL players with five interceptions in each of the last two seasons. ... The Raiders have gone back-to-back games without a play from scrimmage gaining at least 20 yards for the first time since 1992 but are still tied for the most big plays in the NFL this season with 65. ... Las Vegas had 21 sacks in the first eight games of the season and just eight in the last six. ... The Raiders are 3-4 at home and with a loss will have back-to-back losing seasons at home for the first time since 2014-15. ... The Raiders have scored 16 points or fewer eight times this season, tied for the most in the NFL. ... K Daniel Carlson is 12 for 13 on FGs in the final two minutes of regulation and OT since joining the Raiders in 2018. ... Carr earned his 23rd career fourth-quarter comeback and 28th winning drive for the Raiders last week. ... Raiders WR Hunter Renfrow needs six catches to become the seventh player since the merger drafted in the fifth round or later, or undrafted, to have at least 200 catches and 2,000 yards receiving in his first three seasons.

FANTASY TIP: Gordon and Williams have shared the load for the Broncos when both are healthy. Facing a Raiders defense that is 25th in yards rushing allowed per game and has allowed the seventh most catches by running backs, both could be viable options.