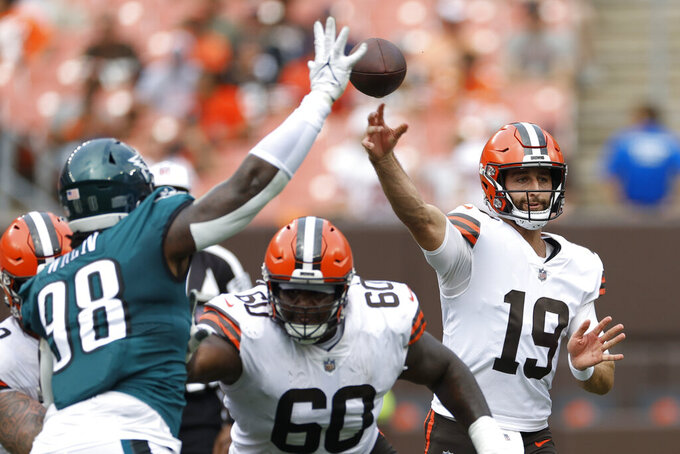 The Las Vegas Raiders waived offensive lineman Alex Leatherwood on Tuesday, the third of the club's three first-round draft picks in 2020-21 to get dumped before the end of his second season.

NFL teams had to cut their rosters to 53 players for the regular season by the Tuesday deadline, although some moves were procedural steps before bringing those players back.

Most of the openings will be when players on the current roster are moved to injured reserve with the possibility of returning this season. Those players have to be on the 53-man roster first.

Leatherwood was the 17th overall pick by the Raiders last year, and started all 17 games. Receiver Henry Ruggs III and cornerback Damon Arnette were drafted 12th and 19th overall, respectively, in 2020 before getting cut after off-field incidents last year.

Mike Mayock was general manager and Jon Gruden was the coach for those picks. They have since been replaced by GM Dave Ziegler and coach Josh McDaniels.

Leatherwood struggled to find consistency, as he was moved from tackle to guard during his rookie season under the previous coaching staff. McDaniels gave Leatherwood another chance at right tackle this offseason, but the former Alabama lineman seemingly regressed behind Brandon Parker and rookie Thayer Munford during training camp.

The Cleveland Browns released quarterback Josh Rosen, a 2018 first-rounder by Arizona who was brought in as an extra arm in training camp while the team navigated Deshaun Watson's situation.

Rosen was a possible option as the backup while Jacoby Brissett starts during Watson’s 11-game NFL suspension. However, Joshua Dobbs had an excellent training camp and preseason, making Rosen expendable.

The 25-year-old Rosen hasn’t lived up to expectations since being taken 10th overall by the Cardinals four years ago. He’s 3-13 as a starter in his NFL career, which also includes stops with Arizona, Miami, Tampa Bay, San Francisco and Atlanta.

Carolina placed Zane Gonzalez (groin) on season-ending injured reserve, leaving the team temporarily without a kicker on their 53-man roster. The Panthers have already worked out Brian Johnson and Eddy Pineiro, and have more tryouts coming.

The Panthers included quarterback Sam Darnold on the 53-man roster, but a move to IR with a chance to return is likely. He sustained a high ankle sprain in the preseason finale against Buffalo. Baker Mayfield is the starter, with P.J. Walker backing him up.

Minnesota released backup quarterbacks Sean Mannion and Kellen Mond, who became expendable last week when the Vikings acquired Nick Mullens in a trade with Las Vegas. Mond was the first of four picks in the third round last year, but was simply deemed too raw as a rookie for any role other than No. 3 QB.

Tennessee is going with rookie QB Malik Willis, the 86th pick overall out of Liberty, as Ryan Tannehill’s backup. The Titans released Logan Woodside, Tannehill's backup the past two seasons.

The Dallas Cowboys left all three backups to Dak Prescott off their initial roster, but Cooper Rush is expected to re-sign and assume that role again. Will Grier could return, possibly on the practice squad, if he clears waivers. Left tackle Tyron Smith (torn hamstring) and receiver James Washington (broken foot) are headed to IR.

Kansas City released Josh Gordon, the once-elite and oft-suspended receiver who spent the past year trying to rebuild his career with the Chiefs. So was fellow receiver Corey Coleman, a 2016 first-round pick. Both played at Baylor.

Seattle released veteran cornerback Justin Coleman, who returned to the Seahawks with the thought of being the nickel cornerback after thriving in that role in his previous stint with Seattle. But rookie Coby Bryant showed enough versatility to play in the slot. Coleman could be a candidate to return.

Buffalo saved a roster spot by placing cornerback Tre’Davious White on the physically unable to perform list, sidelining him at least the first four games and giving him more time to rehab from a left knee injury. Miami did the same with cornerback Byron Jones, who had surgery on his lower leg in the offseason.

The Bills released tight end O.J. Howard, a free agent pickup this year, but still have an opening at punter after waiving Matt Araiza over the weekend. Araiza is named in a civil lawsuit alleging he was involved with other San Diego State players in a gang rape of a teenager last fall.

Miami's wide receiver group was too crowded for Preston Williams, who earned a starting job as an undrafted free agent in 2019 before a knee injury ended his rookie season. He never quite returned to form, and struggled for an opportunity behind Tyreek Hill, Jaylen Waddle and Cedrick Wilson. Hill and Wilson were offseason additions.

Denver cut receiver Kendall Hinton, who was forced to play quarterback when the team had a COVID-19 outbreak in 2020.

There were also a handful of trades on cutdown day, including Philadelphia acquiring defensive back C.J. Gardner-Johnson from New Orleans in a deal that otherwise involved draft picks. Saints coach Dennis Allen didn't want to discuss whether the trade was tied to Gardner-Johnson's contract, which expires after this season.