Rams DT Joseph-Day needs surgery, could be out for season 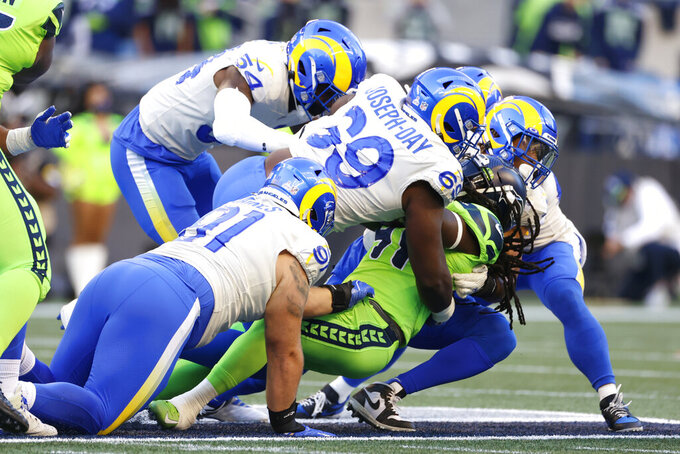 Seattle Seahawks running back Alex Collins is wrapped up by Los Angeles Rams defensive tackle Sebastian Joseph-Day (69) as he rushes during the first half of an NFL football game, Thursday, Oct. 7, 2021, in Seattle. (AP Photo/Craig Mitchelldyer)

Los Angeles Rams defensive tackle Sebastian Joseph-Day could miss the rest of the season after undergoing surgery on an injured pectoral muscle.

Rams coach Sean McVay announced Friday that Joseph-Day has reaggravated the injury that caused him to miss the team's last game against Houston. The fourth-year pro and three-year Rams starter needs surgery that will keep him out indefinitely.

“That’s a big loss for our football team,” McVay said. “Whether or not that means he’ll return at any point this season, I think we’ll have to see after the surgery. But guys will be asked to step up, and that’s a bummer for us.”

Quarterback Matthew Stafford (back) and receiver Robert Woods (foot) both were limited in practice Friday after sitting out the Rams' two previous workouts this week, but both are expected to play Sunday night when the Rams (7-1) host the Tennessee Titans (6-2).

Jalen Ramsey also missed Friday's practice after banging his knee during Thursday's workout, but McVay expects his 2020 All-Pro defensive back to play.

The Rams intend to wait until Sunday to decide whether Von Miller will make his debut with his new team. The pass-rushing linebacker, acquired Monday in a trade with Denver, missed the Broncos' most recent game with an ankle injury, but it appears to be healing well, McVay said.

“It’s hard, because we really haven’t had a lot of exposure to Von, and he’s so tough,” McVay said. “He’s such a great competitor. He’s always really pushing it.”

Joseph-Day is in his third season as a key contributor on the Rams' defensive line. He has three sacks and 38 tackles in seven starts this season, providing a steady run-stopping presence in the absence of longtime defensive tackle Michael Brockers, who left for Detroit last spring.

Greg Gaines largely filled in for Joseph-Day last week against the Texans alongside Aaron Donald and A'Shawn Robinson. Gaines and Robinson have split playing time in the third spot on the defensive line.

Stafford has been limited all week by a stiff back, but McVay says he's still confident the 13th-year pro will be healthy enough to face the Titans. Stafford told the media on Wednesday that he would play.

“You talk about a tough competitor that’s worked through a lot of things over the course of his career,” McVay said. “He’s had some things like this that have kind of popped up in previous years, and he doesn’t seem to be concerned about it.”

Stafford is off to a spectacular start to his first season with the Rams, passing for 2,477 yards and 22 touchdowns while generating MVP buzz.

Although the Rams have lost Joseph-Day, starting cornerback Darious Williams is expected to play Sunday after a three-game absence with a sprained ankle.