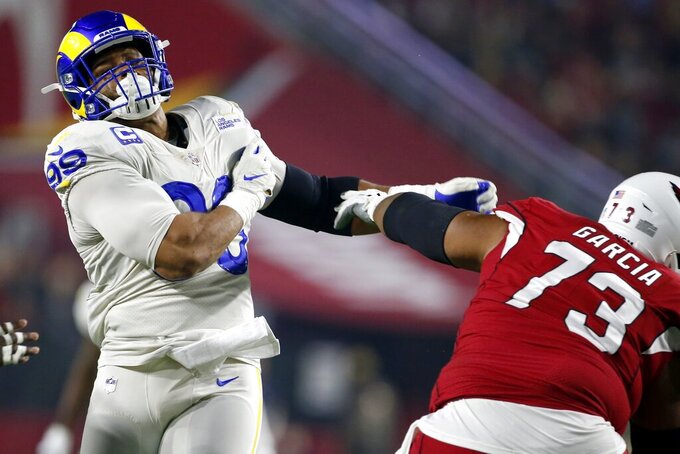 TURNOVER DIFFERENTIAL: Seahawks plus-3; Rams plus-5.

SEAHAWKS PLAYER TO WATCH: RB Rashaad Penny has mostly struggled since being drafted in the first round in 2018 but is coming off one of the best performances of his career. Penny ran for 137 yards and two touchdowns against the Texans, his third career 100-yard outing. He will have to be effective on the ground to keep Los Angeles’ powerful pass rush in check.

RAMS PLAYER TO WATCH: WR Cooper Kupp topped 100 yards receiving for the eighth time this season against the Cardinals, making a career-high 13 catches for 123 yards and a touchdown. He had seven grabs for 92 yards in the first game against Seattle back in October, his second-best total in nine career meetings. If he can keep this pace up, Kupp has a chance to challenge the NFL single-season records for receiving yards and receptions.

KEY MATCHUP: Seahawks QB Russell Wilson vs. Rams DL Aaron Donald. Donald has been a one-man wrecking crew against Wilson, sacking him a staggering 14 times in 15 regular-season games. After reaching Cardinals QB Kyler Murray for three sacks on Monday night — Donald’s sixth game with three or more — Wilson will have to deliver one of his trademark magic acts to escape pressure. A game plan built around screens, quick throws and avoiding third-and-long will likely be deployed to help Wilson, but there will be moments when he has to decide between throwing the ball away and extending the play. How Wilson handles those split-second calls could determine if Donald has another monster showing.

KEY INJURIES: The NFL moved the game to Tuesday due to COVID-19 concerns.

Seahawks WR Tyler Lockett went on the COVID-19 list on Thursday, along with RB Alex Collins. WR DK Metcalf has been able to play through a foot injury for much of the season but is now dealing with a back ailment as well. G Gabe Jackson (knee) and S Quandre Diggs (knee) were also held out of practice Wednesday. … The Rams are dealing with a rash of positive COVID-19 tests that had as many as 29 players on the reserve list this week, including WR Odell Beckham Jr., CB Jalen Ramsey, S Jordan Fuller, RT Rob Havenstein and RB Darrell Henderson Jr. Given the scope of the situation, the roster could be in flux up to kickoff. TE Tyler Higbee went back on the list Friday after a false positive kept him out against Arizona.

SERIES NOTES: The Rams have won the past two meetings, four of the past five, and seven of the past nine. … Seattle has been victorious in just one of four road games since the Rams returned to Los Angeles in 2016. That includes a 23-16 loss in November 2020 in its first visit to SoFi Stadium. … Rams coach Sean McVay is 7-3 against the Seahawks. Los Angeles has scored an average of 31.1 points in McVay’s wins versus 16 points in defeat.

STATS AND STUFF: Seahawks coach Pete Carroll is tied with Bill Cowher (162) for 19th most wins in NFL history. … Lockett has 1,000 yards receiving for the third straight season. He needs 35 yards to set a career high, passing the 1,057 he had in 2019. … Seattle has turned over the ball 10 times, tied with Green Bay for the fewest in football. Wilson threw an interception in the first game against Los Angeles, which was the Seahawks’ lone turnover. … LB Bobby Wagner leads the league with 152 tackles. It is the third time he has at least 150 tackles in a season. … The Rams have 10 plays of 50 yards or more this season. No other team in the NFL has more than seven. … Kupp has 647 yards after the catch. … QB Matthew Stafford’s 33 touchdown passes are the third most by a Ram in a season. Kurt Warner threw 41 in 1999 and 36 in 2001. … OLB Leonard Floyd got his second career interception against Arizona. He is one of eight Rams defenders with a pick. ... RB Sony Michel has rushed for 200 yards in the past two games. He ran for 305 yards in his first 11 games with Los Angeles.

FANTASY TIP: He doesn’t have the name recognition of Kupp or Beckham yet, but WR Van Jefferson has become a crucial part of the Rams’ passing game. If Beckham cannot play, Jefferson could have the same impact on fantasy rosters this week. Jefferson has touchdown catches in three straight games, and Stafford is willing to target him deep, resulting in four receptions of 50-plus yards this season.