Ravens have stayed the course despite their injury problems 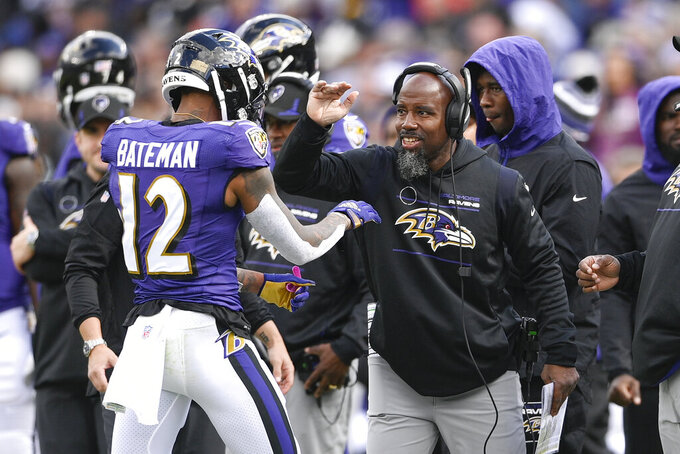 OWINGS MILLS, Md. (AP) — When the Baltimore Ravens lost running backs J.K. Dobbins and Gus Edwards to preseason knee injuries, it felt like a crisis — and the team's health concerns have not exactly gone away since then.

Through it all, the Ravens have kept winning.

“I just think our guys, we keep faith. We do a good job of that, and guys step up," coach John Harbaugh said recently. "Those two things, that’s what has happened. Guys have kept the faith, and guys have stepped up and played well — that’s really what it boils down to.”

The Ravens aren't in the clear yet. After a 41-17 loss to Cincinnati last weekend, they're in a four-way tie for the best record in the AFC at 5-2. But Baltimore has arrived at its open date this week in far better shape than seemed likely, especially after losing its season opener at Las Vegas.

Quarterback Lamar Jackson deserves much of the credit after engineering pulsating prime-time victories over Kansas City and Indianapolis. As long as he is healthy, the Ravens have a chance to overcome injuries to other players.

“Coach always says that: ‘Next man up.’ Those guys know that. I know it," Jackson said. "My job is to just score points, move the ball downfield, and that’s what we do. We’re not worried about the guys who are out and stuff like that.”

If the Ravens do finish atop the AFC North, Harbaugh will probably be a serious coach of the year candidate. His team continues to look like a model of stability even when adversity arises.

Last season, the Ravens were 6-5 and dealing with a COVID-19 outbreak after a loss at Pittsburgh. They rebounded with five straight wins to close the regular season, then won a playoff game at Tennessee.

Call it resilience, call it depth — or just chalk it up to the franchise's culture. Whatever the reason, Baltimore is dealing with its injury problems with less drama than many healthier teams.

“Injuries happen. In a contact sport, you’re going to have injuries,” offensive line coach Joe D’Alessandris said. “That’s why you have to prepare players throughout your roster to get ready for sudden change, and when that happens, you give them a chance. Here’s what I’ve always seen with players that have injuries — when you grant them an opportunity, they take advantage of it, and they do well.”

Here's a position by position look at Baltimore's injury issues, and how the Ravens have tried to manage them:

The injuries to Dobbins and Edwards appeared to create an opportunity for Ty'Son Williams, but he has only 11 carries over the past five weeks. The Ravens brought in veterans Latavius Murray, Le'Veon Bell and Devonta Freeman. Murray missed last weekend's game with an ankle injury, and Bell hasn't looked particularly effective in limited duty.

Rookie Rashod Bateman missed the first five games with groin problems, but he's contributed since returning and has shown promise befitting a first-round draft pick. Now the Ravens are without Sammy Watkins, who had 18 catches in five games before missing the past two.

Tackle Ronnie Stanley played in only one game and went on injured reserve earlier this month because of a lingering ankle problem. Now tackle Patrick Mekari is dealing with an ankle injury. Offensive lineman Tyre Phillips (knee) came back from IR in the middle of this month and basically has to be ready for anything.

“Started off as the starting left guard — he and Ben Powers were working together. Then he got injured, right?” D’Alessandris said. “Then we got him back for the Chargers game on limited work as his first time back, and then last week, we started cross-training him back at tackle. And then, all of a sudden, he had to play three quarters of the game (at tackle). For the first time back at that position and going with live bullets, he did a nice job.”

The Ravens have the league's fifth-best run blocking grade from Pro Football Focus and are tied for 13th in pass blocking.

The top players on Baltimore's defensive front have mostly remained healthy, and this week the Ravens designated defensive end Derek Wolfe (back) for return, allowing him to start practicing.

Even before Dobbins and Edwards went down, the Ravens lost linebacker L.J. Fort to a torn ACL. Fort started eight games last season. Veteran Josh Bynes has played a bigger role lately at middle linebacker, and that's taken some of the pressure off Patrick Queen, who started previously at that spot.

This may be the spot where the injuries have been toughest to overcome. The Ravens lost cornerback Marcus Peters to a knee injury before the season, and they've already allowed three quarterbacks to pass for 400 yards.