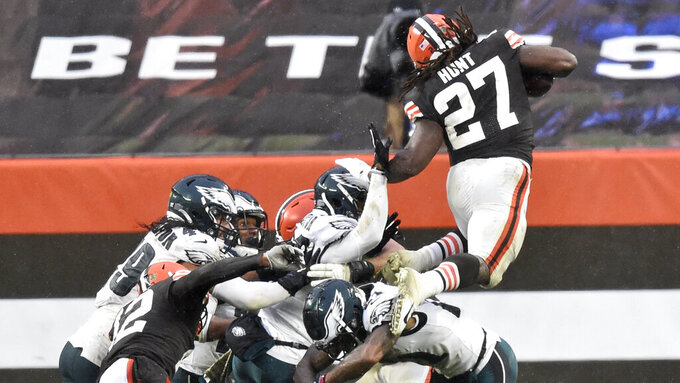 Cleveland Browns running back Kareem Hunt (27) rushes for a five-yard touchdown during the second half of an NFL football game against the Philadelphia Eagles, Sunday, Nov. 22, 2020, in Cleveland. The Browns won 22-17. (AP Photo/David Richard) 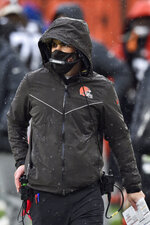 The Thanksgiving night game between the Ravens and Steelers has been switched to Sunday afternoon because of coronavirus issues with Baltimore.

The NFL announced the move Wednesday, placing the game at 1:15 p.m. EST on NBC. Previously, it was scheduled for NBC's prime-time telecast on Thanksgiving Day.

The Ravens said later Wednesday they had disciplined a staff member, reportedly a strength coach, for not obeying league protocols.

"We appreciate the NFL for its diligence in working closely with us to ensure the well-being of players, coaches and staff from both the Baltimore Ravens and Pittsburgh Steelers organizations,” the Ravens said in a statement.

“Protecting the health and safety of each team, in addition to our communities at large, is of utmost importance. We will continue to follow guidance from the NFL and its medical experts, as we focus on safely resuming preparations for Sunday’s game.”

The game — assuming it is played on Sunday — means the Ravens will trade one short week for another. They are scheduled to play Dallas on Thursday, Dec. 3.

There will be no fans allowed for the Ravens game.

This isn't the first time the Steelers have been forced to adjust their schedule because of COVID-19 issues with opponents. Their trip to Nashville on Oct. 4 to face the Titans turned into an unexpected bye week when Tennessee was hit with an outbreak.

The tweak forced the Steelers to play 13 straight weeks to end the regular season. They had hoped for at least a mini-break by playing on Thanksgiving — the franchise's first-ever home game in Pittsburgh on the holiday — and then getting the weekend off before starting the home stretch.

Instead, they find themselves adjusting on the fly once again.

“First the NFL takes away our bye week because another team can’t get their Covid situation together, now they take away our Thanksgiving primetime game for the same reason. Smh,” he posted on social media.

The silver lining for Smith-Schuster is that it gives him a few extra days for the right leg he tweaked during a freak play in Jacksonville — when he twisted his leg after stepping on a penalty flag — to get ready for the Ravens.

Coach Mike Tomlin has praised his team's ability to stay light on its feet in adapting to the COVID-19 pandemic as part of their success. The Steelers were hit with their own COVID-19 scare earlier this month when tight end Vance McDonald tested positive following a victory over Dallas, forcing quarterback Ben Roethlisberger and a handful of teammates to self-quarantine before facing the Bengals. Roethlisberger ended up playing and throwing four touchdowns in an easy victory.

Roethlisberger shrugged on Tuesday when asked if it was right for the Steelers to face the Ravens without Baltimore being able to practice as a precaution.

“This is just an unusual year when it comes to everything we have to do, that everyone has to do. We saw it early, obviously, with the Titans game, byes, all these kinds of things,” he said. “What are you going to do? You just have to do what they tell you and go play ball.”

Also, the Cleveland Browns practiced in shifts and held players out as a precaution while dealing with a new round of COVID-19 issues.

The team temporarily closed its headquarters in Berea, Ohio, after starting linebacker Sione Takitaki tested positive Wednesday. Before revealing Takitaki's identity, the Browns conducted contact tracing to see if others players were exposed to the second-year linebacker, who returned an interception for a touchdown in Sunday's win over the Philadelphia Eagles.

As an additional safety measure, Browns coach Kevin Stefanski had his offense and defense work out separately inside the team's indoor field house, which is also being used as a weight room due to COVID protocols.

It's become the norm in Cleveland.

“We started off on online meetings and having to make schedule changes and everything on the fly, so this is nothing new to us,” quarterback Baker Mayfeld said. "The next-man-up mentality that we want to be about, no matter who is out there, we want to be able to go out there and execute. Whether it is COVID stuff or injuries like you said, you never want to have it, but you have to deal with it, especially this year.”

Takitaki is the fifth Cleveland player to go on the COVID list. He'll miss Sunday's game in Jacksonville along with star defensive end Myles Garrett, who also missed the win over Philadelphia after becoming ill last week.

Stefanski has not provided any specifics on Garrett's condition, but said it's possible the 24-year-old who has 9 1/2 sacks, could return for the Dec. 6 game against Tennessee.

This has been a steady, familiar pattern for the Browns, who have had to shut down their headquarters several times in the past few weeks to do contact tracing as the virus continues to wreak havoc across the NFL and country.

“The guys are adapting, they’re being flexible,” Stefanski said. (Offensive coordinator) Coach Van Pelt showed a picture of Stretch Armstrong this morning, and that’s who we are, and that’s who’ve got to be."

Other NFL teams are also dealing with COVID-19:

— The Jacksonville Jaguars will be without three defensive coaches this weekend because of COVID-19 testing and contact tracing.

Marron and assistant special teams coordinator Mike Mallory will run the defense during practice this week.

— The Cincinnati Bengals have added receiver Auden Tate and offensive lineman B.J. Finney to the reserve/COVID-19 list. The team returned cornerback Winston Rose to the practice squad from the COVID-19 list. The Bengals host the New York Giants on Sunday.

— The Indianapolis Colts placed Pro Bowl defensive tackle DeForest Buckner on the reserve/COVID-19 list. Buckner will not be able to play Sunday, leaving Indy without its best run stuffer for a showdown with Tennessee. The loss could be especially damaging because the Colts will be facing Derrick Henry, the league’s 2019 rushing champion and this season’s league leader.