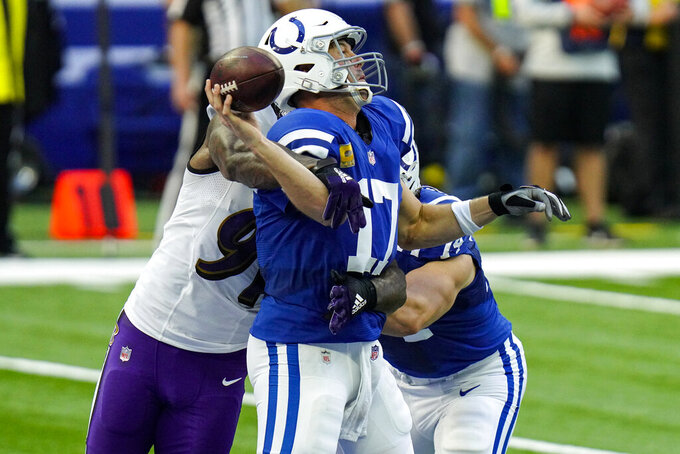 Indianapolis Colts quarterback Philip Rivers (17) is hit by Baltimore Ravens defensive end Yannick Ngakoue (91) as he throws in the first half of an NFL football game in Indianapolis, Sunday, Nov. 8, 2020. (AP Photo/AJ Mast)

Cornerback Marlon Humphrey returned from the reserve/COVID-19 list Wednesday to rejoin an ever-changing Baltimore Ravens defense that has allowed the fewest points in the league.

With Humphrey out last week, the Ravens shut down Indianapolis and quarterback Philip Rivers despite losing defensive tackle Calais Campbell in the first quarter with a strained left calf. If Campbell can't play Sunday night at New England, his run of 98 consecutive games will end.

That means that Derek Wolfe will probably see more playing time in his productive first season in Baltimore. He participated in 51 of 68 snaps against the Colts, a departure from the first seven games when the 30-year-old Wolfe was part of a rotation with Campbell.

Wolfe was fine with his expanded duty, and he's ready for more Sunday.

“I’m used to taking all the workload. That’s how it was for eight years in Denver," Wolfe said Wednesday. “Obviously, losing a guy like Calais, that (stinks) because he’s one of the all-time greats playing on the defensive line and his leadership is unmatched. I have to step up."

Wolfe will have plenty of help, because defensive coordinator Don Martindale has proven to be a master at shuffling players in and out of the lineup. Nineteen players participated on defense against the Colts, who were held to 10 points.

“We’ve got these young guys come in, and they’re strong and powerful," Wolfe noted.

General manager Eric DeCosta fortified the defense during the offseason by trading for Campbell, signing Wolfe as a free agent and drafting linebackers Patrick Queen and Malik Harrison, along with tackles Justin Madubuike and Broderick Washington.

Wolfe was delighted to join the Ravens, a team long known for its stout, hard-hitting defense.

“There’s a standard around here in Baltimore, and I just try to live up to that standard every day," he said.

Those who don't fulfill expectations don't last long. The Ravens cut seven-time Pro Bowl safety Earl Thomas in August after he was involved in a skirmish at practice.

Martindale plugged in DeShon Elliott, and the defense didn't miss a beat.

The unit played well into October, but DeCosta wasn't satisfied. He traded for Vikings sack specialist Yannick Ngakoue last month and on Tuesday signed 37-year-old cornerback Tramon Williams after putting cornerback Khalil Dorsey (dislocated shoulder) on injured reserve. Although Williams hasn't played since 2019 with Green Bay, he arrived in excellent shape and made an immediate impression with his knowledge of the game.

“We’re very happy with the fact he’s got so much experience," coach John Harbaugh said. “He played all the coverages that you can play, done everything you can do defensively in this league."

Williams joins a defense that is allowing 17.8 points a game and ranks eighth in yardage allowed. The Ravens have forced a turnover in 21 consecutive games, the longest active streak in the league.