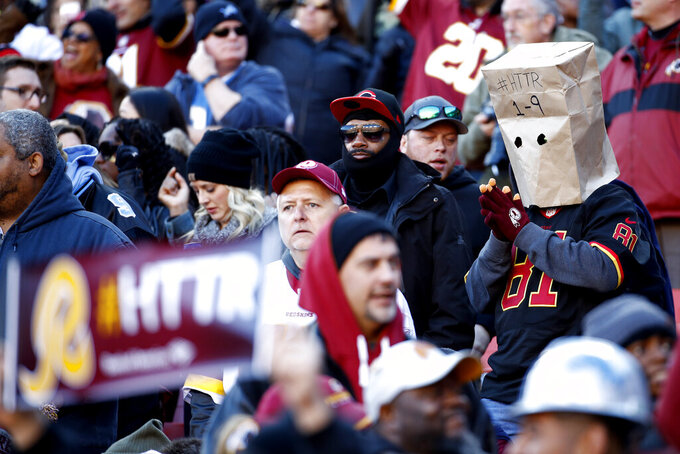 A spectator wears a paper bag on his head while watching the first half of an NFL football game between the Washington Redskins and the Detroit Lions, Sunday, Nov. 24, 2019, in Landover, Md. (AP Photo/Patrick Semansky)

Haskins was celebrating the Washington Redskins’ 19-16 comeback win over the Detroit Lions by taking a selfie with a fan who was in the first row. The only problem: The game wasn’t quite over, and backup Case Keenum went on the field to kneel down and run out the clock in Washington’s second win of the season.

“I was so hype I think I broke a water bottle,” Haskins said. “I look up and we were in victory (formation) and said, ‘Oh, I thought the game was over with already.’ But I'll get it next time.”

The rookie quarterback made his share of mistakes on the field — and forgetting to get back on the field — during an ugly game against the Lions, but he was there when the Redskins needed him most. Haskins was able to brush off a wrist injury that contributed to some overthrows and the bad look of missing the final play in large part because he guided Washington into field-goal range to finally get in the win column.

The 15th overall draft pick was 13 of 29 for 156 yards and an interception and could approach it like all’s well that ends well after Dustin Hopkins connected on a 39-yard field goal with 16 seconds left and the Redskins snapped a four-game skid and won their first game at home in 13 months.

Haskins scrambled for 11 yards and completed passes of 5 yards to Kelvin Harmon and 17 to Terry McLaurin to set up Hopkins’ go-ahead field goal. Cornerback Fabian Moreau’s interception of Jeff Driskel — the third thrown by the Lions quarterback — got the Redskins (2-9) the ball back with 2 seconds left and set in motion the weird ending that confused even interim coach Bill Callahan.

Haskins drew criticism for overthrowing McLaurin and other wide-open receivers, and Washington had to settle for a field goal each time. He said his right wrist was pretty banged up, but responded “I’m good” when asked to elaborate.

In his third start since taking over for injured Lions starter Matthew Stafford, Driskel was picked off twice by Moreau and once by Quinton Dunbar. The interception by Dunbar in the final minute hurt the most because it gave Haskins and the Redskins the ball back to win it in regulation.

“We turned the ball over,” said Driskel, who was 20 of 33 for 207 yards, a touchdown and the three interceptions. “It really is frustrating, and you got to go in that locker room and take accountability and that's what I'll do. Those are on me.”

Undrafted rookie Steven Sims muffed the catch on his kickoff return early in the second quarter. Then he took advantage of the Lions’ blown coverage to go 91 yards for a touchdown.

“I tried to catch the ball while I’m running forward so I hit it full speed,” Sims said. “I kind of was ahead of the ball a little bit. It hit off my shoulder. I knew once I picked the ball up, they were going to be in my face, so I had to go.”

It was Washington’s first kick return touchdown since 2015 and another bright spot in a lost season because Sims has shown he can be a difference-maker on offense and special teams.

Redskins cornerback Josh Norman was in uniform but only saw the field on special teams. After multiple reports Sunday morning that he’d be inactive, it was a bit of surprise Norman played at all.

Callahan said he met with defensive coordinator Greg Manusky, secondary coach Ray Horton and Norman on Thursday when the decision was made to demote him. Callahan said it was Norman’s choice to be in uniform even though the 31-year-old was only set to play if another injury occurred.

“Where you are today isn’t the determining factor of where you’ll be tomorrow,” Norman tweeted before the game. “But Everyday is its own starting point to create a dynasty that’ll last when you’re gone.”

Norman has drawn his share of criticism during a rough season, his fourth since signing a $75 million, five-year deal with Washington. Manusky said he “couldn’t tell you why” Norman has struggled.

“I think from our situation, we're putting him in situations to make some plays, and we're just not making the plays,” Manusky said this week.